Every time we return to Chicago we are amazed by the amount of new high-rise construction and the beauty of many of its buildings. 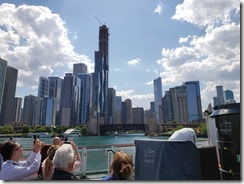 On one hand, this is not surprising. Chicago, after all, has been at the forefront of American architecture since 1884, when William Le Baron Jenney  built the Home Insurance Building, recognized as the first “skyscraper”. The city went on to pioneer glass-curtain towers which moved the structure’s support to the center of the buildings. Chicago Architects also created the Prairie Style (Frank Lloyd Wright), the International Style (Mies van der Rohe), the Chicago Style (Louis Sullivan), led the Post-Modernism movement (Bertand Goldberg). Meanwhile, the Chicago-based Skidmore Owens and Merrill pioneered and continues to create many of the structural techniques that make 1,000- and 2,000-foot mega-skyscrapers both possible and feasible.

On this trip, we started out touring the CAC’s new two-story exhibition center, which includes a:

The center also had a series of special exhibits that examined the:

From here, we embarked on one of the Center’s ever-popular, premier tour—the Architecture Center’s River Cruise. While many other organizations now offer similar river tours, in our minds, this is the only one to take.

The cruise, begins (and returns) on the main branch of the Chicago River. It explores the recreation of late 19th and early 20th-century warehouses into modern residences along the North Branch, the contemporary South Loop Towers of the Southern Branch’s eastern side and the way architects have addressed the challenges of building over and around the tracks of the river’s western bank.

The Main Branch provides a superb overview of the city’s high-rise architectural heritage, from towers including, but certainly not limited to the historically-inspired Tribune Tower, European Renaissance and Neo-Classical Wrigley and Carbon and Carbide Buildings, the Deco-inspired Board of Trade and 333 North Michigan buildings, the striking, highly innovative, corncob-shaped Marina City city-within-a-city, the huge range of International-style towers (including the AMA and IBM buildings), the Modernist Lake Point and Trump Towers), the Post-Modernist Leo Burnett and the undulating, organic flows of the Studio Gang’s new Aqua Tower and huge, multi-use Vista Tower complex. Nor, amidst all these towers, can one miss the new, two-story, all glass Apple Store nor the massive (four million sq ft) Deco Merchandise Mart, which, by day, is diversifying from being a furniture showroom into a hub for tech startups and by night, a venue for massively-scaled public art (see below). 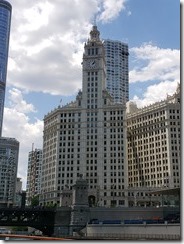 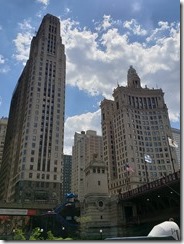 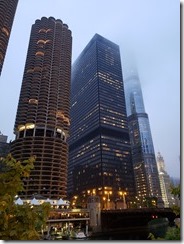 The North Branch was at the heart of the city’s successful plan to reverse the flow of the then, uber-polluted Chciago River’s water (industrial waste, untreated sewage, stockyard carcasses) way from Lake Michigan (which was and remains the city’s primary Water supply), into inland rivers. This stretch of the river was home to some of the downtown areas largest warehouses (including Montgomery Ward and Fulton cold storage facilities), both of which have been transformed into fashionable residential buildings and the still-operating Tribune (not to speak of Midwest New York Times, Wall Street Journal and other) printing presses. They are all now surrounded by all style of commercial and residential towers. 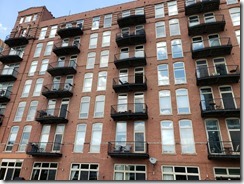 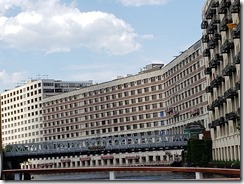 The eastern side of the South Branch is home to River City, Bertand Goldberg’s far-sighted solution to reincorporate housing into an area that had been blighted since the 1871 Chicago Fire—an area that has since expanded to include the now-fashionable Printer’s Row. Further to the north, a growing parade of towers that strive for recognition in the shadows of the height and innovative structural design of the Sears (now Willis) Tower, including the 311 S Wacker Building which catches the attention of people and birds alike with its huge, high-wattage florescent dome (which has to be subdued during bird migration seasons). 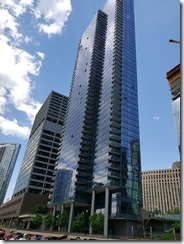 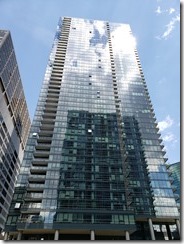 The Wolfe Pointe area, at the Western confluence of the River’s three branches, was and remains the center of the city’s train system. As the eastern bank became increasingly crowded and expensive, developers faced greater pressure to develop the western bank, especially the area between (and over) the bank and the tracks. This has prompted a number of innovative solutions, such as 150 N. Riverside (which supports a 45-story tower atop a tiny base that is squeezed between the two obstacles) and the Boeing Headquarters, which uses a set of roof-top trusses to suspend the weight of one-third of the building that is built over the tracks. These and other West Bank towers, including the curved-fronted 333 West Wacker and the arched cut-outs of River Pont (not to speak of the Main Branch’s Trump Tower) also exhibit the type of Contextualism to help them fit in with the buildings surroundings. The southern end of the West Bank meanwhile, is home to the massive, long-vacant Old Post Office Building, which is also now being converted into a multi-use complex that will have the world’s largest green roof. 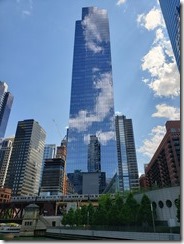 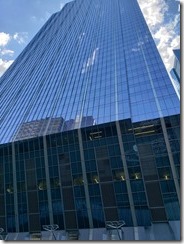 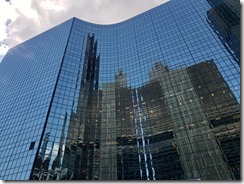 We explore and attempt to understand cities and neighborhoods (and get exercise at the same time) by walking. This allows us to stop and ponder sites, explore interesting shops, peruse menus, stop for refreshers at interesting lounges and speak with residents. This trip’s walks took us from the Loop, South and West Loop neighborhoods, along the North shore, parks and neighborhood, and up Milwaukee Avenue though more distant hip neighborhoods including Bucktown, Wicker Park and Logan Square.

Among this trip’s many discoveries were: 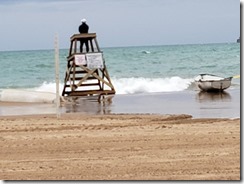 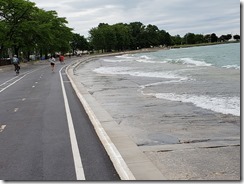 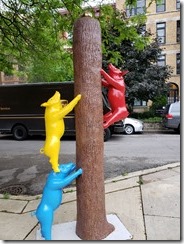 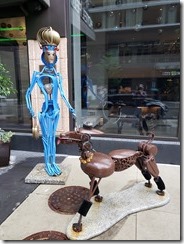 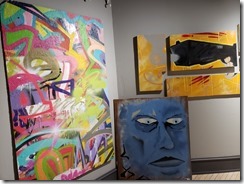 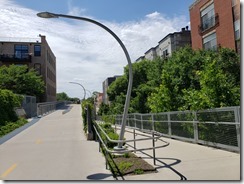 Now an even larger, more recent addition (at least on summer evenings, after 9:00)—Art on the Mart, an ever-changing series of digital art image and video projections that cover the face of the huge, 25-story building and is being billed as the largest digital art projection in the world. 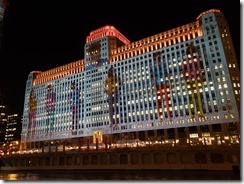 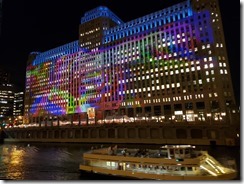 And this does not even begin to consider the thousands of privately-financed public art that tops, sits in the lobbies of corporate buildings and that seem to be popping up all over the city.

Chicago, yes, it is a beautiful and changing city.