The studio/theater tour begins in the Assembly Hall in which we learned the history of the Wright family. His grandparents immigrated from Wales to Spring Green. Wright return to the town to build two schools (one to supervise construction of his first employer’s design and the other as a commission by two of his aunts for a school they ran). We learned more about his own architectural principles, including the blending of buildings into the landscape and the use of local materials (in this case, sandstone, oak and even sand for mortar).

The Assembly Hall provided an introduction to a number of design elements that Wright repeated throughout Taliesin and many other FLW building, including: 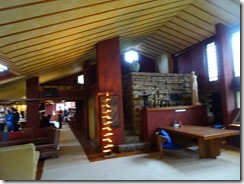 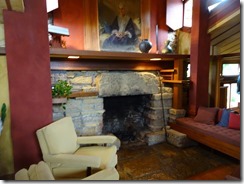 The room, which is two stories in the center, is surrounded by a balcony (which houses the school’s library) and a window into the student dining room with, of course Wright-designed tables and his famously uncomfortable chairs. 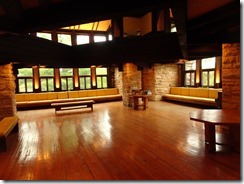 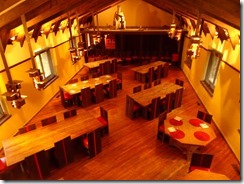 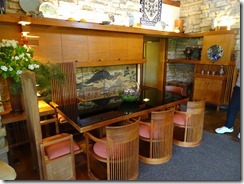 We then entered the drafting studio (of which we could not take pictures when occupied by students), a 5,000 square foot space filled with long tables on which the students worked, is particularly noted or its scalloped roof with several layers of skylights and the series of dark wooden trusses, which Wright termed and “abstract garden” that supports the roof.

After visiting a classroom, which contained drawings and models of a number of FLW buildings, we visited the adjoining theater, whose eves were built around, and continually cut bac to accommodate a large, 100+ year-old tree, was designed for, and is still used for concerts, performances and lectures. The stage, which is at the bottom, is ringed by rows of unexpectedly (for Wright) comfortable chairs and backed by a Wright-designed, but never made abstract curtain (that represents Taliesin and the surrounding countryside) that his students made and presented to him on his 90th birthday. 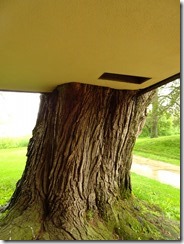 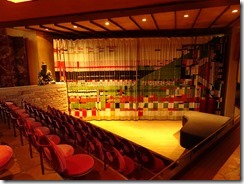 We then took a drive through the complex passing his windmill and barn in which his early students (especially during and shortly after the depression) to house the farm’s animals and tools for tending the crops—all of which were done by the students.

We then arrived at the third (circa 1925) Wright family home to occupy the site after the first two burned–the first by a disgruntled employee who also killed Wright’s mistress and two employees, and the second by lightning. We began in FLW’s own studio and meeting room before passing the tiny, barely functional kitchen and entering the living quarters which were expanded from their original two to three stories to accommodate two adult daughters who moved back into the house.

The house tour began in the lovely living/dining room, filled with oriental screens, ceramics and sculpture and Wright-designed furniture, including a fascinating four-sided music stand to accommodate quartets, and carved Buddha heads embedded into the stone to commemorate the people killed by the employee. 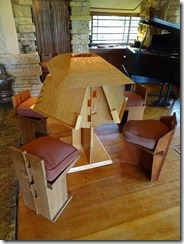 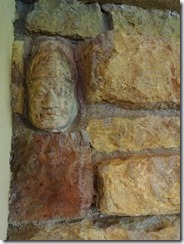 The entire room, along with the exterior “birdwalk” from which his third wife looked for birds, provide phenomenal views of the custom-built pond and the surrounding countryside. 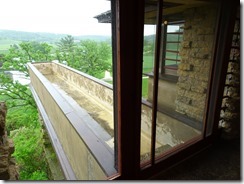 The tour continued through his third wife’s bedroom, the informal “Blue Loggia’ living room, which looked up to the third floor balcony decorated with carved wood Chinese screens and the Garden Room with access to the garden (whose arbor was made of cow stalls from the original barn) and FLW’s plunge pool. 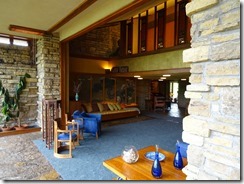 The tour ended in Wright’s own bedroom, with his tiny bed, work table, views, seashell collection (with which he demonstrated the importance of each person having a custom home tailored to his/her own needs, six-panel Japanese painting and shelves full of oriental art. 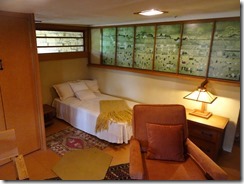 One the way back to the Wright-designed Visitor Center we passed the dam and scenic waterfall he built to create a large pond and also to create the complex’s electricity (long before municipal electricity ever reached Taliesin.

Returning to the Visitor Center, we browsed through the collection of Wright-inspired goods in the gift shop and ate lunch at the Riverview Terrace Restaurant which is run by interns in Taliesin’s Food Artisan Immersion Program. After a tasty lunch (see below), we drove to the Wright family Unity Chapel, the nearby Wright-designed Wyoming Valley Elementary School and huge, Alex Jordan-designed House on the Rock complex and gardens, all of which are perched on atop a large, 60-foot tall rock (atop a roughly 200 foot hill) that towers over the valley. The road is lined with huge, Chinese-style urns and the complex is home to many huge collections (antique guns, mechanical banks, a reconstructed 19th-century town, model ships, automated musical machines, doll houses, circus pieces, Crown Jewel replicas and other items in which we did not have sufficient interest to visit.

Spring Green dinner options are very limited. Of the few options, we chose the popular, downtown restaurant Freddy Valentines. The restaurant is located in a former bank, with one dining room in the safe. We shared two sandwiches from the limited menu: roasted apple grilled cheese with white cheddar, gouda and blue cheeses, bacon, caramelized onions and Dijon mustard, along with an Angus burger with blue cheese and smoked bacon. Joyce chose a 2015 Rivarey Rioja from the limited wine list. Tom stayed with a Virtue brut cider from the more lengthy beer and cider list. Both dishes were fine, if not particularly noteworthy.

Lunch at Taliesin East’s Riverview Terrace Restaurant was quite good. We enjoyed both the chicken and mushroom with fresh local, organic vegetables, chicken and bleu cheese streussel, and also the grilled Hooks aged cheddar sandwich with russet fries. And in the spirit of sampling local, artisan beers, Tom enjoyed a Lake Louis Hopalicilittlous ale.

Spring Green does not have a lot of hotel options. We stayed at the Round Barn Lodge. We were a little nervous as we drove up to the building as one side of the building had a lot of people sitting around outside drinking beer. But it was actually quite nice. The place is fairly newly renovated and has an inside swimming pool (which we didn’t use). While it is a few miles out of town there is little in the town to draw you in. And it is close to Taliesin. The room was surprisingly good for  this level of hotel. It had a nice leather chair with footrest, which is unusual, and a good size TV. Not bad