Milwaukee Wisconsin is known for its beer. Yes, we sampled beer (more later in this blog), but we also found some other interesting attractions 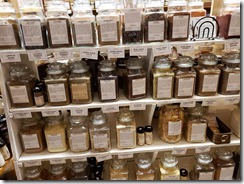 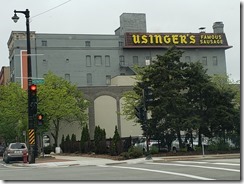 Other Milwaukee Areas to Check Out 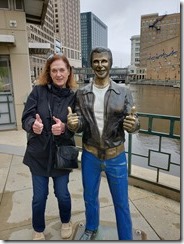 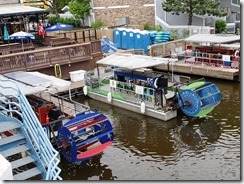 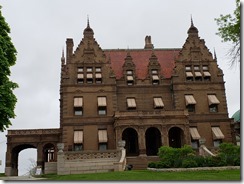 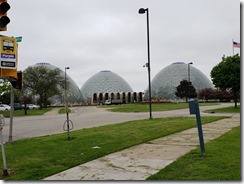 This block has a cluster of six, tiny homes that Frank Lloyd Wright created as prototypes for a new form of very functional and fashionable, yet very affordable homes for working-class families who could not normally afford such homes. The designs are classic Wright, with flat roofs, prominent fireplaces and hidden, low entryways. The primary differences—they are much smaller (about 1,000 sg. ft.), semi pre-fabricated (built according to one of 30 pre-defined designs), made of less expensive materials (such as stained gumwood rather than oak or walnut and were very inexpensive (about $3,000 apiece in 1920 dollars). 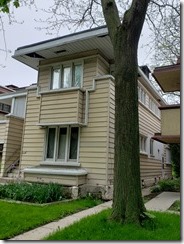 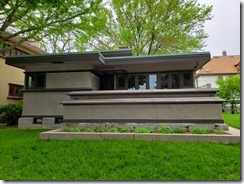 Wright designed and built these so-called American System-Built Homes in conjunction with Milwaukee developer Arthur Richards. They were intended to compete with inexpensive mail-order homes then available through the Sears Catalog. Referred to by model numbers, such as BI and C3, most were standalone, single-story homes. A few were two-story, two-unit buildings.

Given that these buildings are open only on selected weekends, we were not able to tour them. They are, however, significantly smaller than Wright’s somewhat more expensive Usonian homes (which we did visit in Manchester New Hampshire). We’ve read that these homes are so cramped and awkward that their market was small. Moreover, the business relationship between Wright and Richards quickly went south and fewer than ten of these buildings were ever built.

While most of the Burnham Block houses are reasonably authentic, a couple have been so changed as to almost unrecognizable. Four of the buildings have now been purchased by a nonprofit and are currently being restored.

The permanent collection in this beautifully restored bank building traces the history of the city (including a huge old safe). 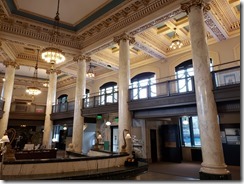 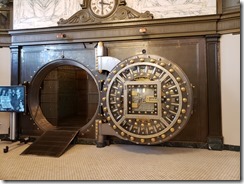 We mostly focused on a special exhibit that traced the history of Milwaukee through the debate around Prohibition through the 1920s. It examined the pressures for prohibition and profiled the people who campaigned for it and the arguments Milwaukee brewers and officials who campaigned against it, the impacts on the roughly 6,500 Milwaukeeans who were put out of work, the many small breweries that went out of business and how the majors’ other businesses (property rental, hotels, soda, malt syrup, flour, cereal, etc.) allowed them to survive. It traced the failed attempt to sell “near beer” (0.5 percent alcohol) and how many bars survived by converting to soda parlors (often by selling soda with a shot of whiskey). It examined the ways different establishments got around prohibition, the violence and corruption that gradually led to repeal and the ways the city celebrated when repeal was finalized.

The separate but related exhibition on the Jazz Age examined the atmosphere of the late teens and 20s, with the growing popularity of jazz, blues, “risqué” dress and dancing and the economic and social changes that affected Milwaukee from the end of WWI and the Depression. It examined the changes in housing, transportation and the growing importance of radio, the roughly 2X growth in the city’s manufacturing base from WWI to 1930 and the severe shortage of less skilled labor due to restrictions on immigration and the limited number blacks who reached Milwaukee during the post-war migration from the south. While the city did manage to survive the first year of the Depression with little effect, it did suffer in 1932 and 1933, seeing, for example, the number of families on public assistance jump from 1,000 to 140,000, before New Deal programs such as unemployment insurance and social security kicked in.

The Harley-Davidson Museum is veritable history of the iconic American motorcycle company. The museum shows the motorcycles’ history in 450 motorcycles from the 1903 Serial Number One, through the customized, 13-foot long, two-engine King Kong, through current models. The exhibits begin with a history of the company. It started in 1903, and proudly displayed Number One (which may or my not have been the real first motorcycle) which was a bicycle with an engine.

The company formally incorporated in 1907 and by 1914, it was selling more than 20,000 motorcycles. It created a formal service training program by 1917 and had built a worldwide dealer network by 1920.

By the mid-1920s, it began streamlining its bikes for speed and the tastes of the time and began designing bikes specifically for women. By the 1930s—and the depression—Harley had come out with its ServiceCar (to allow merchants and small businesses to deliver goods cheaply) and begun to sell large volumes of machines to police departments. By the early 1940s, it had shifted virtually its entire production to addressing military needs (about 90,000 units during the war, benefited from a market of returning soldiers who learned to ride in the military.

By the end of the war, it began to incorporate a lot of pent-up technological enhancements into its bikes, significantly enhancing performance, comfort and efficiency, and continually streamlining them. Exhibits show the evolution of multiple models of cycles though 2010.

Complementary exhibits focus on areas including:

Even if you are not a motorcycle fan, the museum was a very interesting piece of American history.

A trip to Milwaukee would not be complete without a brewery tour. Rather than visiting the huge, well-known brewers like Miller, Schlitz and Pabst, we decided on a smaller brewery with which we were not familiar.

Sprecher Brewery was founded by Randy Sprecher in 1985. This Army veteran developed a passion for beer during a posting in in Germany. He worked at Pabst, but was laid off when the company was acquired. While he began by producing a couple beers he brewed in his home, he soon expanded into soft drinks (initially Root Beer) and a growing range of lagers and ales.

Most interesting were the ingredients and the process for making beer. Sprecher beer is made from different types of malt (primarily one of three types of barley–malted, caramel and chocolate–and for a few beers, wheat), hops, water (multi-filtered Lake Michigan water) and yeast. To transform this into beer, they gradually heat the water to a boil, then add the malt and separate the mash (solids which is sold to farmers) from the wort (liquid) to which hops are added in three stages. When ready, the liquid is cooled, the yeast is added and the mixture is left to ferment from three days to three weeks, depending on the type of beer being made. It is then sent to the cold lager cellar to age and then to the line to be bottled. A tour took us through the entire combining and heating of the ingredients in the brew kettle, to the cooling tanks and through the bottling, labeling, casing and palleting processes. 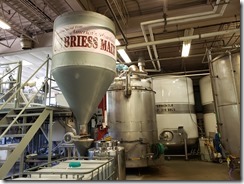 We then returned to the tasting room where, between the two of us, we sampled multiple of Sprechers’ sodas, several of its beers, its two hard ciders, hard root beer and even a few mustards. Among our favorites were the root beer and cream sodas, special amber, IPA, Mai Bock and Abbey Belgian Triple beers, cranberry-apple cider and stone-ground beer mustard.

An interesting, albeit very basic tour and a nice opportunity to taste a wide range of the company’s wares.