Nashville Tennessee is well known for its honky-tonk bars, partying and its music scene.  But it also has some interesting museums—many of which explore its musical history.

This museum is a celebration of the country music culture. It is home to more than 200,000 audio recordings, 500,000 photos, 30,000 videos, thousands of pieces of clothing and hundreds of musical instruments, not to speak of at least two incredible autos. The self-guided tour began with special exhibitions on selected country and music acts including Emmylou Harris and the Judds. 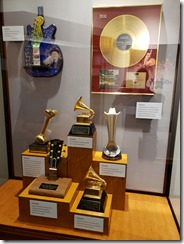 It has Elvis’s gold-plated Cadillac and Webb-Pierce’s “slightly” customized Pontiac, with longhorns mounted on the grill, rifles on the hood and trunk, a saddle between two bucket seats, pistol-based door handles and more than 1,000 silver dollars (since converted to less valuable alloys) embedded on the dashboard and virtually every other suitable interior surface. Then there were the dozens of acoustic, electric and steel guitars, banjos, fiddles, drums and hundreds of ornate dresses, shirts, pants and suits. 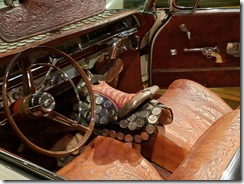 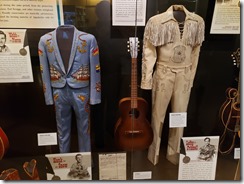 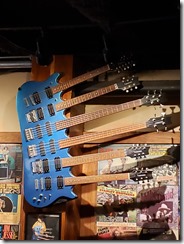 Most interesting, was a chronology of the history of country music, effectively annotated with selected videos beginning with a rare 1920s-era recording of young children spontaneously dancing to the strumming of a banjo, through those of minstrel shows, early movies and Grand Ole Opry performances. 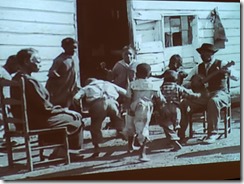 Numerous text panels and displays provided context. These panels traced the history of country music from:

The story continued in a separate section of the museum in an exhibition titled Outlaws and Armadillos. This section explores the 1970s-era of the “Outlaw Movement” and “Cosmic Cowboy” music when Willie Nelson, later joined by artists including Kris Kristofferson, Janis Joplin, Waylon Jennings and others moved to Austin and KOKE radio began programming the so-called “progressive country music” originating from the “hippie” culture that emerged around them and the television program “Austin City Limits” began broadcasting it around the country. Later in the decade, this new movement began to expand into Lubbock, Luckenbach and San Marcos TX and Austin’s Armadillo World Headquarters emerged as the home of the “Cosmic Cowboy” rock that they produced. During the same period, “Southern Rock”, as from the Allman Brothers, Lynrd Syknrd and the Marshall Tucker Band brought country-style music to a new audience. It expanded even further in the early 1990s with the release of the movie “Urban Cowboy” and in the 199, with artists including Garth Brooks, and the 2000’s with another mover, “Oh Bother”. 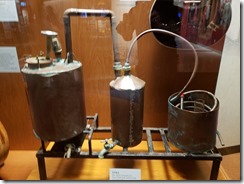 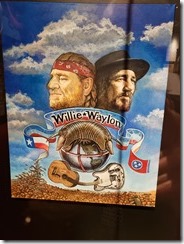 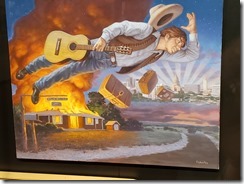 The museum’s Taylor Swift Education Center, meanwhile, provides interactive learning resources for people of all ages to explore the museum’s resources in much greater depth than can be done on the museum floor.

The First Museum is located in a former Art Deco Post Office. While we were there, the museum was showing several temporary exhibits composed of art from multiple other museums.

The exhibition name is a somewhat misleading for a brief survey of French art which was primarily from the Mellon family. ) The exhibit focused on Impressionism, with a smattering of pieces from all major, and a number of less well-known artists. But it effectively bracketed the movement with occasional pre-Impressionist pieces (such as Romanticism) and post (Cubism, Fauvism and Expressionism). A Sporting Vision, (also from the Mellon collection), featured paintings of the pastimes of the English Rural Gentry, such as hunting, fishing, farming and especially horse racing. 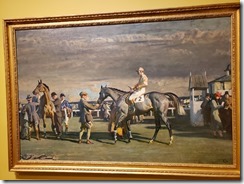 We found the most interesting of the exhibits to be a retrospective on the career of the photographer Dortohea Lange built from photos from the archive of the Oakland Museum of California. We caught a docent tour who not only explained the photos, but also the forces that shaped Lange and her career. Lange began as a portrait photographer of San Francisco’s elite. However, she found her true calling when she was recommended for a government assignment photographing the tragedy of the Dust Bowl and the migration of more than a million farmers and their family members to California. She raised national awareness and honed her own career-shaping perspective by focusing not on the economic and agricultural tragedy, but on the very human tragedy. 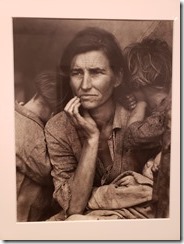 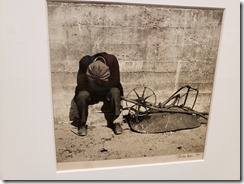 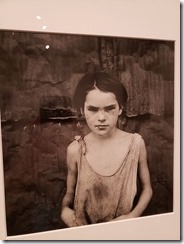 Her next big assignment, by Fortune magazine, called on her and Ansel Adams to create a 24-hour portrayal of Richmond, California’s Kaiser Shipyard’s production of Liberty cargo ships. 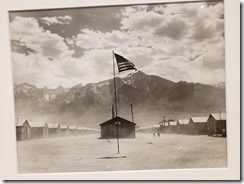 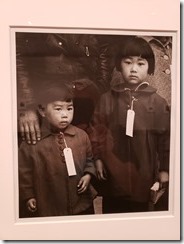 She then turned her eye on the rapid, as she saw it, indiscriminate and unplanned development of northern California to the detriment of both the people who had lived there, and of the environment. A video, meanwhile, traced her career with interviews in which Lange explained her own unique point of view and the social and political lessons she learned over the course of her career.

The city also has several other, smaller museums, none of which we visited, that are dedicated to individual artists such as Johnny Cash, Patsy Cline and Hank Williams. Meanwhile, another major music-focused museum is currently under construction. This, the National Museum of African-American Music. 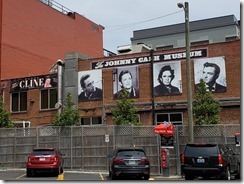