When we think of Churchill in Manitoba Canada, we think “polar bears”. While we saw a lot of polar bears there, we also had a chance to see a lot of other wildlife.

Among the highlights were:

Ptarmigans birds are snow-white in the winter (although with black patches beneath their wings) making them practically invisible against the snow. In fact, since they sport brown and gray feathers in warmer months, they are almost invisible against the more varied landscapes of summer as well.

The birds typically form into single-sex flocks in the winter and then separate in the spring, when males seek to establish their own territories and attract mates. When the eggs hatch, the male remains to protect his mate and the eggs. Once they hatch, he leaves and the mother takes on her own, albeit rather brief duties.

Since chicks can leave the nest and even fly short distances within a day after they hatch, the mother’s primary responsibility is to teach them to forage for the seeds, berries, leaves, heather, and flowers that constitute their summer diets. Every day, the chicks fly a bit further from home and, after two or three months, leave for good. By winter, when food becomes more scarce, the birds move to less desirable, less nutritious foods, such as twigs, and in the early spring, willow buds.

While life is tough for ptarmigans in the winter, it is almost as tough for tourists to see them. Except for their black eyes and beaks, their white feathers blend seamlessly into the white background. Even their legs and feet are white—covered with feathers that allow them to walk atop soft, deep snow, a skill that allows them to flee predators. 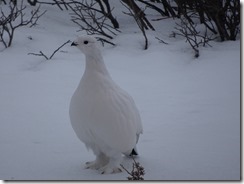 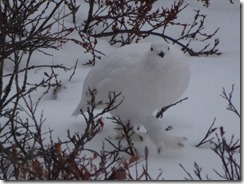 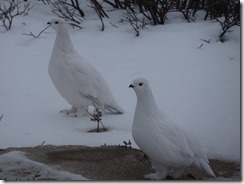 Arctic hares, sitting still among the willow bushes, are almost as difficult to spot as ptarmigans. These hares, which can grow up to about 15 pounds, are also white in the winter but molt, becoming greyish-brownish in the summer. This includes their feet, whose large size and fur coat act almost like snowshoes. Living on woody plants, bark, twigs, and roots, they can access foot year-round, Mating, often after vigorous boxing (with their front legs) and kicking (with their hind legs) with rival males, can be almost as an aggressive as earning the right to mate. Babies, called leverets, are born, typically one litter per year, in the summer. Within two weeks, they are out on their own. We only saw one, which is unusual in that he/she is typically nocturnal. He was also very cooperative in posing for pictures by all. 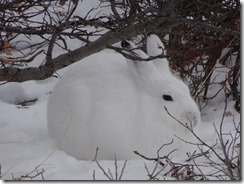 After polar bears, the arctic fox was a high-priority animal that we both wanted to see. These predators employ a similar camouflage strategy to ptarmigans and arctic hares: Snow-white fur in the winter, including on the bottoms of their feet, turns dark brown in summer. Its fur does more than camouflage the fox. Since its fur is twice as thick as that of any other mammal, it also plays a critical role in protecting it from the weather. 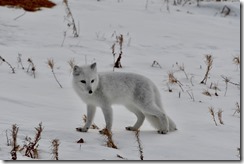 Females give birth in early summer, typically to litters of between six to ten cubs. The cubs remain in the den for about 15 weeks, a period during which they and their parents may eat 4,000 lemmings, their favored food. When lemmings are scarce the foxes make do with voles, birds, crabs, beached fish and other sources of protein. They will also follow bears, feasting on the large portions of the seals that the bears leave behind after devouring the blubber.

Although our sighting was brief as the small fox walked purposely by, we did at least get good looks, albeit not necessarily good pictures.

Unlike many of the land animals we saw, the red fox is richly colored year-round. Although it is primarily a scavenger, it is fast (up to 37 MPH), intelligent and ever-resourceful, as evidenced by his great success in finding shelter and food in towns and even in some large cities. It can also hunt, as we saw, watching one catching a snack of three lemmings in a few minutes. 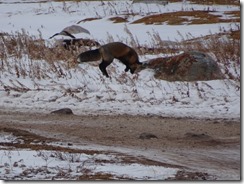 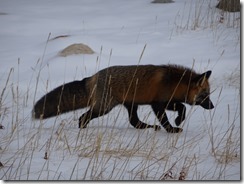 This relatively large fox, however, usually prefers larger, more nutritious meals, such as hares, birds, eggs and even the smaller arctic fox. Our guide, in fact, had pictures she took of a chase in which the red fox caught and killed its arctic cousin and systematically dismembered it, carrying it, piece by piece, back to its den or temporary cache.

Mating seems to be an interesting mix of one-night stands culminating in a lifetime relationship. The parents jointly assume responsibility for nursing and caring for their young. The youngsters begin exploring outside the den about a month after birth, and live in the den with their parents until autumn.

But Wait, There’s More…Or Not

We also saw a Harbor Seal bobbing in water in the distance. High in the sky, we saw a Gyr Hawk flying overhead on the look-out for his or her next meal. And we saw a raven perched on a rock. Although we tried and tried, we were unable to check off a couple of other items on our “to-see” list.