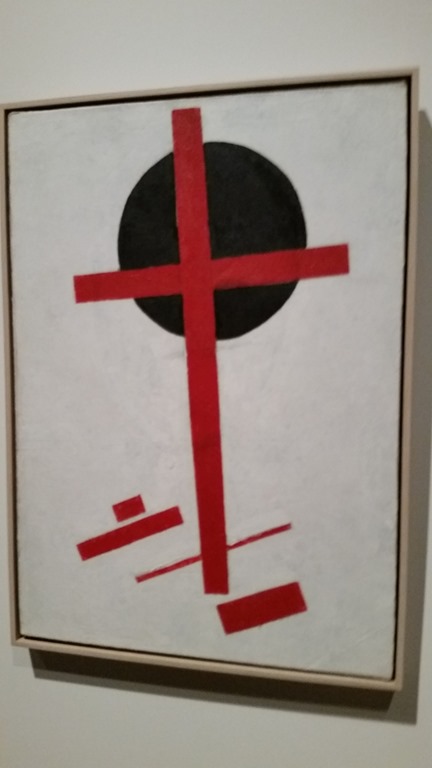 The Russian Avant-Garde in Vitebsk

On our fall 2018 trip to New York City, the Jewish Museum was hosting an exhibit entitled Chagall, Lissitzky, Malevich: The Russian Avant-Garde in Vitebsk, 1918-1922. The exhibit portrays the groundbreaking work of these three artists and their protegees when teaching in Vitebsk in the years following the Russian Revolution, with each developing complementary styles of revolutionary art and their own personalities. Chagall, for example, possibly presaging what would be extensive work in designing stage and opera sets and costumes (see our post on a Los Angeles exhibition of his work in theater), from his early adult years, dressed not in street clothes, but in costumes of his own design,

Each of these artists employed abstraction in different ways:

All, in their own interrelated ways, sought to create a form of symbolic expression for an anticipated Utopian society. All formed foundations on which future generations of abstract artists would invent new genres.

The museum’s permanent collection contains over 30,000 works of art that cover 4,000 years of Jewish culture. During our visit, it was exhibiting examples of Jewish art across the millennia, from a 3rd-century BC sarcophagus with the image of a menorah through all types of contemporary works. The museum has two exhibits of menorahs—including a fascinating contemporary representation that consists of more than 80 examples.

A smaller exhibit shows different representations of the Star of David over the ages. Others paintings and other images showed Jewish families and individuals by Jewish artists. Another fun exhibit shows video clips of television shows including The Sopranos, M.A.S.H., and the Simpsons of Jewish psychiatrists. Artists represented in the galleries include Mark Rothko, Lee Krasner, Camille Pissarro, Louise Nevelson, and Cindy Sherman in a delicious photo of herself as an ancient biblical scholar.