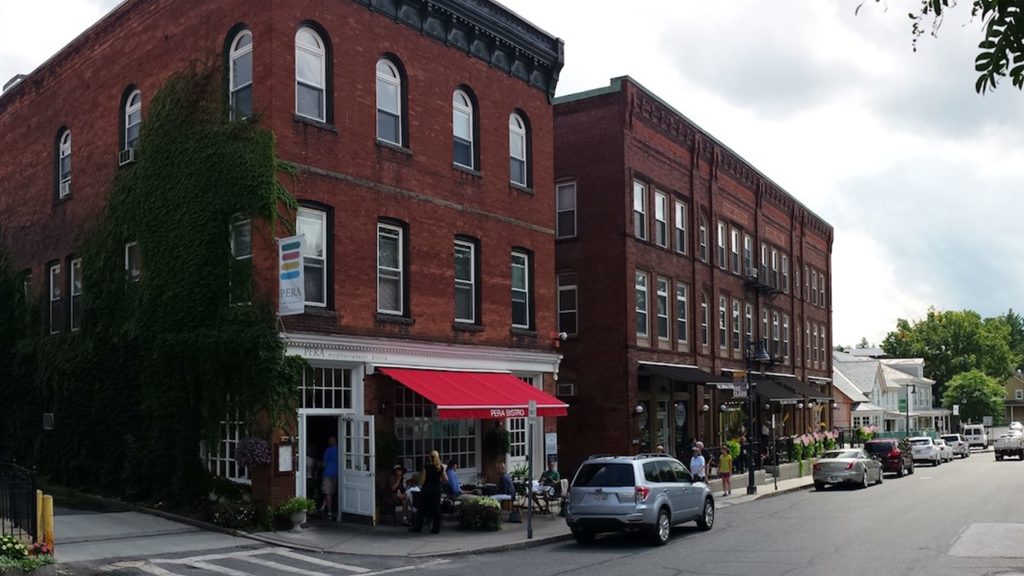 Williamstown Massachusetts is a small, pretty college town on the Massachusetts/Vermont/New York border. The town itself is lovely with its two-block long commercial street (Spring Street) old buildings, and school campus. 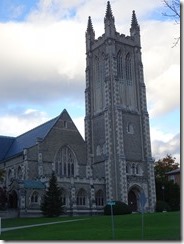 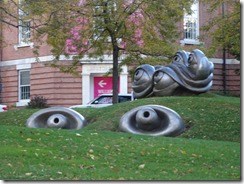 We decided to stay in Williamstown for 2 nights. This would work for many people but it was not a good decision for us.  Part of it is the sleepy town of Williamstown doesn’t fit into our need to find things to do at night when we travel or to find good food without having to drive far. Oh yes, we did find a bar within walking distance of our hotel with a Red Sox game on it which helped somewhat. But for us, Williamstown doesn’t have much going for it other than The Clark, which we can do on a day trip from another location in the area.

But whether or not you want to stay here, the town is worth a visit for three primary attractions:

While we hiked Mount Greylock on a  previous visit, we did not have time for that long hike on this trip. Instead, we focused on the two museums before driving down through the Berkshires to our next stop in Lenox, Massachusetts.

The Clark is one of our favorite small museums in the country. The complex and collection have both been expanded since our last visit. It has particularly strong collections of Winslow Homer (The Clark’s favorite painter) and George Inniss oils, representations of Dutch, French Romantic, and Italian religious works and nice collections of 19th-century British (especially JMW Turner and John Constable), formal silver table settings that trace the evolution of styles and a small but highly representative collection of European and American glass made with different technologies.

The museum, however, is best known for its Impressionist collection which had several oils from all of the primary artists and one of the most comprehensive representations of Rodin and Degas sculptures. It has the largest private collection of Renoirs in America and most of these represent his most important, transitionary period between his initial experimentation with Impressionism and the development of his own, unique style. 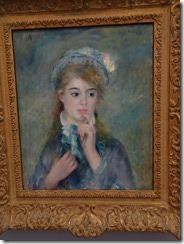 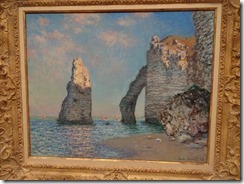 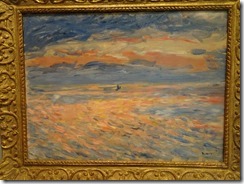 It also has one of Joyce’s favorites: John Singer Sargent’s Smoke of Ambergris 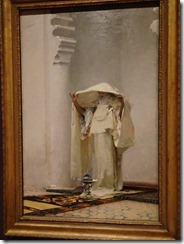 Other parts of its permanent collection include: 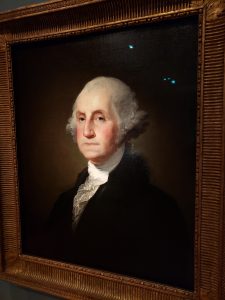 Nature Transformed: Claude and Francoise-Xavier Lalanne (known collectively as Les Lalanne) was the one special exhibit being shown during our mid-October 2021 visit. This team of French artists looked to nature as a source of inspiration for mind-bending flights of fancy (such as a crocodile chair), surreal hybrid objects (such as a rabbit with wings and the feet of a hooved animal) and quirky inventions that reimage the natural world (such as a life-sized rhinoceros that opens into a desk and a giant grasshopper with compartments for wine bottles and glasses and wings that can server as small tables. 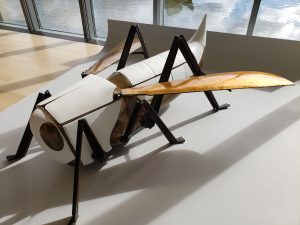 Mass MOCA is a reconstruction of the large Sprague Electric manufacturing complex. The huge museum is spread across seven large, multi-story, reconditioned brick buildings. It was the cornerstone of the redevelopment of this depressed post-industrial town. As a number of additional buildings are still empty, we expect that Mass MOCA will be adding buildings to the museum as its rapidly expanding collection continues to grow. And grow it will, since few museums can offer the space that contemporary artists need for large installations.

We found some interesting exhibits: 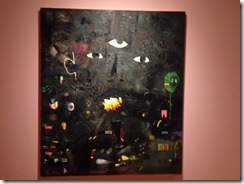 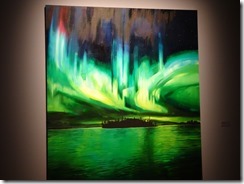 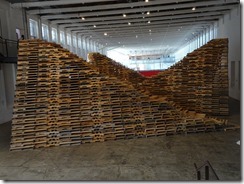 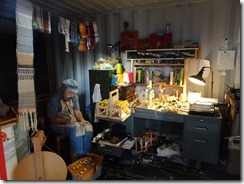 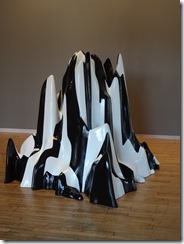 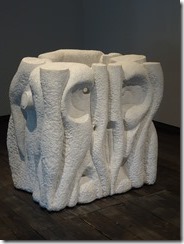 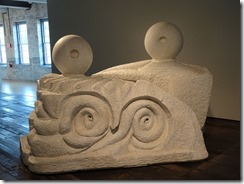 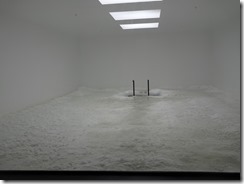 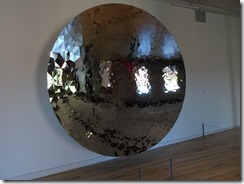 Speaking of light patterns, one floor of one building is devoted to works by James Turrell, the master of light installations. The exhibit consists of a number of installations that help viewers to perceive light and its effects in different ways. These include: 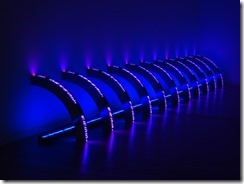 The installation also provides models of the artist’s Roden Crater project—a Flagstaff-area volcanic crater the artist purchased and is now in the process of converting into a series of viewing chambers from which the sky is supposed to take on different appearances of solids. (We can let you know if it fulfills its promise when we next get to Flagstaff.)

The highlight of the visit, however, was a super-installation! A massive, three-floor, 30,000 square-foot building that hosts a retrospective of Sol LeWitt’s iconic wall drawings. Each floor represents a different stage of the artist’s career, with dozens of very different installations on each floor: 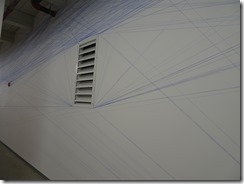 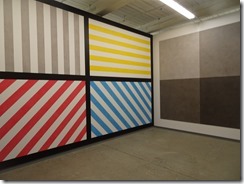 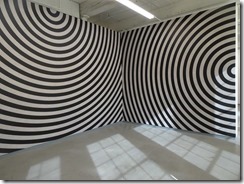 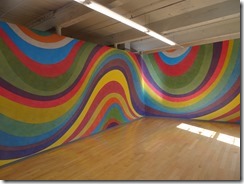 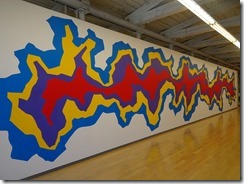 And for those who are looking for a more personal relationship with LeWitt’s work, you can buy table place settings with the artist’s designs in the gift shop.

While we have always liked Mass MOCA, we often have no idea of what a contempory artist is attempting to express and therefore, have no context from which to begin interpreting the work, or even deciding whether or not we like it. No, we are not asking for so much information that we do not really think about the piece. But enough information to provide context for which you are seeing and to provide s starting point for your own interpretation would help us.

Contemporary art aficionados who can and prefer to discern their own meaning without an intermediary may not approve. However, as contemporary art neophytes,  such aids greatly enhance our appreciation of art that would otherwise be way beyond us. Thank you, Mass MOCA!

We stayed at the House On Main Street. If you want to stay in Williamstown, the location is very walkable to the college, the 2 block strip of college stores, and The Clark. Our disappointment with this place started before we arrived. We reached out too many times via email and phone messages before we got an answer on places to eat in this busy time of the year so that we could make reservations. OK, we need to reset our expectations. Our room was on the second floor (no elevator of course as this is an older, historic place). The bed was fairly comfortable. Our bathroom was outside our room but we had a door to block off the bathroom from the hallway so it was somewhat private. The AC didn’t seem to be strong enough to overcome the heat which was on in the house in general. We tend to like a colder room for sleeping, unlike many people. The breakfast was served for the entire table of guests at the same time. Although we were told breakfast was 8:30ish, we all sat around until about 9:00 when it really started. Well, it gave us more time to interact with the other guests.  Breakfast was fine, nothing special as many B&Bs are, but not bad. The woman serving breakfast made it very clear that we were expected to leave a tip in the room for the staff (which included her). The owner was delightful, open, and very friendly, which makes it harder to understand why we had to reach out so many times to get restaurant information in advance.