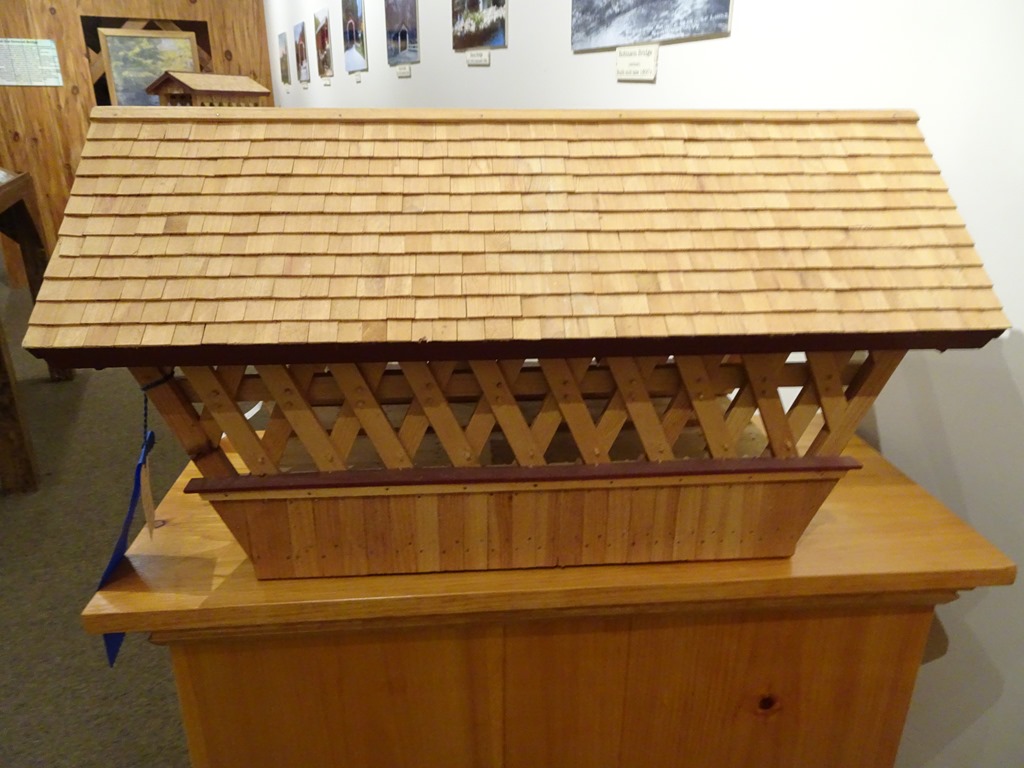 Driving from Woodstock Vermont to Bennington Vermont can be relatively boring (from Route 4, down Route 7), or very scenic. When we have the time, we take the scenic route, down the lovely Route 100 through Plymouth (the birthplace, homestead, and now Historical Park of President Calvin Coolidge), a through a number of quaint and pretty towns (including Ludlow and especially Weston, whose Vermont Country Store is a national treasure.

We then shifted west to drive down Route 7A. We passed through the distinguished tourist town of Manchester (with its elm-lined streets, marble sidewalks, grand, white Colonial-style Equinox Resort, and Hildene which is the home of Robert Todd Lincoln. Then through Arlington and to Bennington Vermont.

What To Do In Bennington Vermont 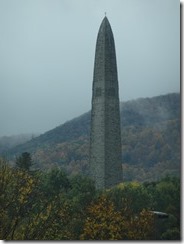 Bennington Vermont is a pretty college town. It was the site of an important revolutionary war battle in which the colonists, with the help of the Green Mountain Boys, defeated a British regiment that was planning to sack the town for desperately needed supplies. Superior forces, combined with the element of supplies, enabled the colonists to deplete the British forces and depleted already poor morale. It was seen as an important factor contributing to the subsequent British loss in the Battle of Saratoga, one of the most important colonial victories of the war. A 306-foot stone obelisk commemorates the battle.

The Bennington Museum is a very nice museum that focuses primarily on New England Art and local history. Three of the museum’s largest galleries focus on the fine and decorative arts, furniture, home products, tools, and toys created and used in Vermont and the rest of New England in the late 18th, and especially through the 19th century. 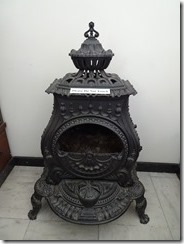 Another gallery focuses on “Bennington Modernism” the art created by a number of 1950-1980 avant-garde artists who spent time in and worked in the Bennington area. 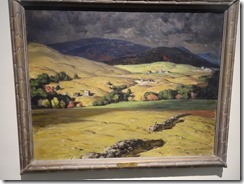 Other galleries focus on history. The history lesson begins by explaining that Vermont was never a colony. While both New York and Massachusetts tried to annex the territory, Vermont remained an independent republic from 1777 to 1791, until it joined the United States as the 14th state. The European settlement of the territory did not even really begin until after the 1760s. But then Vermont grew rapidly—having a larger population than either New Hampshire or Rhode Island by 1810. It also became quite prosperous due to a combination of its farming, timber, and marble quarrying industries. This prosperity, however, came to a crashing halt after 1825, when the Erie Canal began bringing low-priced competitive products into the east from the Midwest. Making matters even worse, Vermont had already begun to lose population to the Midwest, which offered larger tracts of more productive agricultural land. 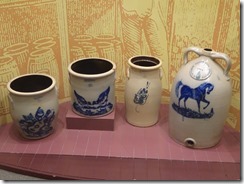 Another gallery was on the Gilded Age of Vermont and the great prosperity of the late 19th and early-20th centuries. The Bennington area alone was home to about three dozen mills and manufacturing plants. Many factory and skilled workers could afford their own homes and mill and factory owners built mansions and luxury goods from around the world.

A temporary exhibit, “Crash to Creativity: The New Deal in Vermont” effectively took off from this point. It explains how the state’s economy lost more than a third of its value between 1929 and 1932 alone. This decline devastated most of the state’s population—with farmers, rural dwellers, and the elderly being among the greatest casualties. New Deal Programs, especially the Works Progress Administration (WPA), Farm Security Administration (FSA), the Social Security Administration (SSA), and the Civilian Conservation Corps (CCC) shed light on the suffering by commissioning art that portrayed the hardships. They also provided temporary employment and subsidies to alleviate some of the sufferings and provided a foundation for future growth by improving agricultural practices and conservation and helping the state develop infrastructure and attractions to attract tourists and summer residents to the state. 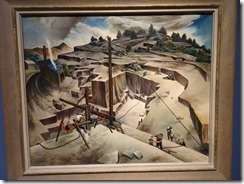 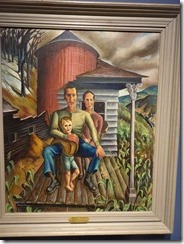 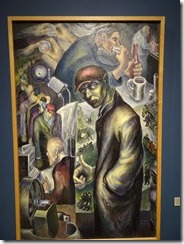 Another gallery highlighted a couple of dozen paintings by Anna Marie (aka, “Grandma”) Moses. She was born during the Civil War and spent her life in a rural community about 10 miles from Bennington. While she dabbled in painting for much of her life, the self-taught artist did not seriously begin painting until she reached age 70, when she could no longer do physical labor associated with life on a farm. She was “discovered” two years after that. Her work was exhibited at New York’s Museum of Modern art. By the 1940s, Grandma Moses had become one of the most famous U.S. artists. Her work primarily consisted of oil-based paint on pressed wood and typically provided idyllic representations of rural life of a bygone era. While she occasionally addressed darker subjects, such as the Battle of Bennington and the challenges of everyday life, her style, combined with her rosy disposition and optimistic attitude always came through in what she called “happy pictures.” She continually painted until just before her death at age 101, leaving a legacy of more than 1,000 paintings. In addition to her paintings, the gallery includes a short interview of the talented and down-to-earth artist. 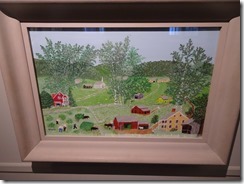 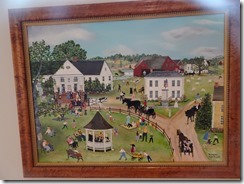 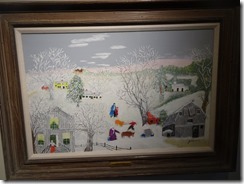 Bennington Center for the Arts 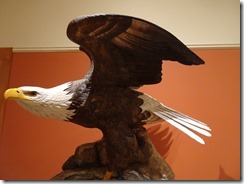 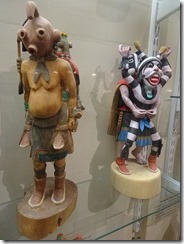 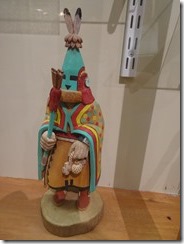 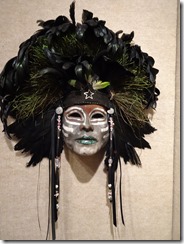 The covered bridge museum used a combination of film, photographs, artifacts, and models to explain the history and evolution of covered bridges. Covered bridges protected the structures from harsh New England weather. Covered bridges came in different styles and techniques. Rather than pay royalties for a patent for a bridge, designers continually invented new types of trusses and bridges. It explained how bridges were used for meetings and romantic rendezvous, their popularity for displaying advertising posters, and the different types of animals that made their homes in them. While about 300 such bridges remain in New England (about 100 of which are in Vermont), their number has declined dramatically, due primarily to fires and especially floods (particularly one in the late 1920s). 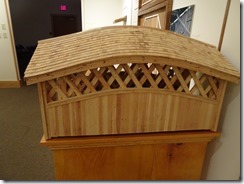 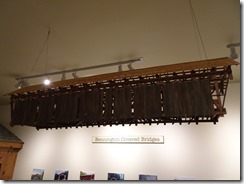 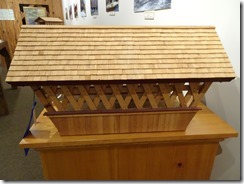 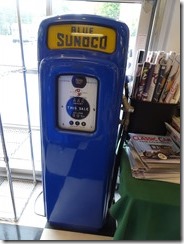 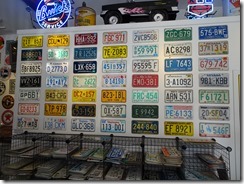 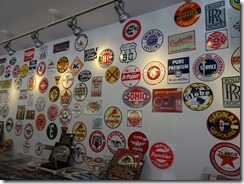 And if you have time for a meal, we recommend the Madison Brewing Co, Pub.  This brewpub has an extensive menu from which we had two very good lunch dishes and a pint of the brewery’s 3-Way IPA. The dishes were a turkey sandwich with Vermont cheddar with maple butter on toasted sourdough and Angus beef chili with loads of beef and covered with melted cheddar with chopped onions and tortilla chips. Nor, apparently were we the only ones impressed by the food. The restaurant was packed while another brewpub a few doors away was virtually empty.