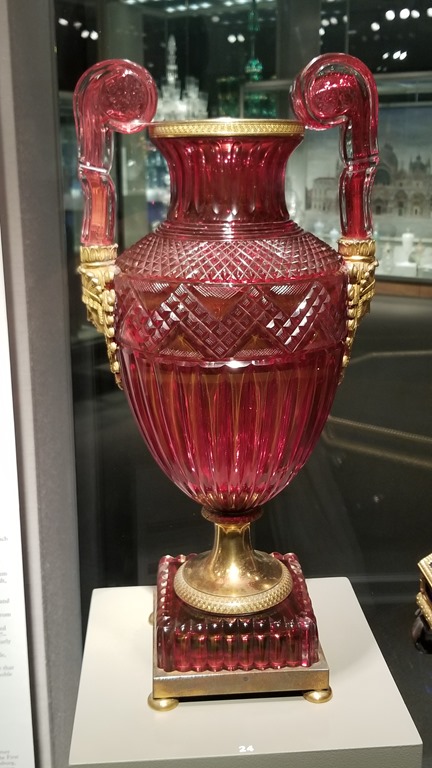 Corning Museum of Glass, located in Corning New York,  houses the largest, most comprehensive collection of glass in the world. It traces the worldwide history of glassmaking over 3,500 years, from its roots in Mesopotamia to the present. Its hands-on displays explain the continually evolving science of glassmaking, demonstrates the art of glassblowing and displays hundreds of examples of glass, ranging from tiny, delicate ancient vases through huge 19th-century glass tables and candelabra and large-scale contemporary abstracts.

It explains and provides examples of everything from North American Indians’ crafting of tools from obsidian through ancient Egyptian ceremonial pieces, lovely 5th-century B.C Persian vases, through luxury glass from 1st-century B.C Hellenistic Greece and 1st-century A.D. Rome. By the 7th century, the Persians were pioneering new forms of decorative glass while the Venetian island of Murano was beginning its long ascent into becoming the art glass powerhouse.

By the 19th century, glass began evolving from custom luxury items to a mass consumer product with the emergence of hand-operated presses and Northern European and North American crystal giants including Baccarat and Steuben (later named Corning) came into the fore.

Interspersed through this timeline are explanations and examples of the role of glass in everything from religion (including stained glass), science (beakers and test tubes), music (flutes and harmonicas), entertainment (from beer steins to decanters) and of course, paperweights.

This part of the museum displays some of the works of many of the world’s leading glass artists. These include one of Dale Chihuly’s lovely “seaforms” (in addition to the 15.5 foot-tall Chihuly Fern Green Tower glass sculpture in the museum’s front lobby), a number of Lino Tagliapietra’s works (including a lovely orange bowl topped by a black cityscape). Other particularly interesting works range from the ethereal (an elaborate Gianni Toso chess set suggesting ways in which Roman Catholics and Jews can establish communications) to the whimsical (Dan Daily’s Café, which represents a cool dude with sunglasses and a glass of wine).

This exhibit provides a fascinating overview of innovations that have advanced the production, technology expanding uses of glass over the centuries. It begins with some examples of early innovations, such as those for blowing glass into metal molds (1881-89), the automation of mass production (1903), the Pilkington Process for producing flat glass between sheets of tin and the 1920 development of tempered glass. Most displays, however, focus on more recent innovations such as the 1959 creation of the Flint Process which automated the Pilkington Process, the 1984 development of shaped glass and many more recent developments including the chemical vapor deposition process for applying energy-conserving coatings on glass windows, the development of fusion-drawn glass (a more efficient and precise process for producing flat glass), the creation of glass panels that can bend without breaking and the ability to make huge telescopes to the precise tolerances required for state-of-the-art, fused silica telescopes.

Having been in the computer industry, however, we were particularly drawn to innovations in glass that have enabled enhancements to information technologies. These included:

Although we unfortunately got to the exhibit just at the end of a presentation on this technology, we were enthralled by an exhibit that showed a six foot-diameter bundle of copper cable that would be required to carry the amount of data accommodated by a single, fishing line-diameter optical fiber (which has three times the tensile strength of steel). But as impressive as that was, the speaker told us that the display was six years old. Today, a single fiber can carry nine billion simultaneous phone calls. This task would require 18,000 copper wires!

This exhibit provides dozens of examples of decorative glass compositions designed from 1990 to today. It includes a few chandeliers and many large glass ornaments and installations.

And, it makes sense that a glass museum would offer glass for sale. And it did. It has a huge selection of art glass, ranging from $10 glasses to beautiful, large, several thousand-dollar abstract glass pieces. A section of the shop was devoted to kitchenware, meanwhile, portrayed some of Corning’s more practical innovations, such as heatproof Pyrex glass and unchippable Corelle dinnerware. Of course we couldn’t resist adding to our glass collection and ended up with a few momentos of the trip.

Corning offers visitors the opportunity to create a piece of glass art. While we were there, the options were a  glass lily flower, or, a glass pumpkin.Of course we had to do it and chose the lily. Our instructors explained and demonstrated the process and offered each of us a chance to select the colors we would like from the many choices.

The instructors handled the most dangerous part of adding layers of molten glass from the Glory Hole onto our rods. But we had to keep turning the rods to keep the molten glass from dropping while simultaneously using metal paddles and tweezers to shape the glass into the desired shape, all, with the step-by-step guidance and occasional active assistance, of our instructor. Not bad for amatures, but either of our works are quite ready for our own solo shows.

We also had an opportunity to create a sandblasting pattern on small glasses that could be used as a pencil holder. Fun to do and great souvenirs, but true artists don’t need to worry about the competition from us.