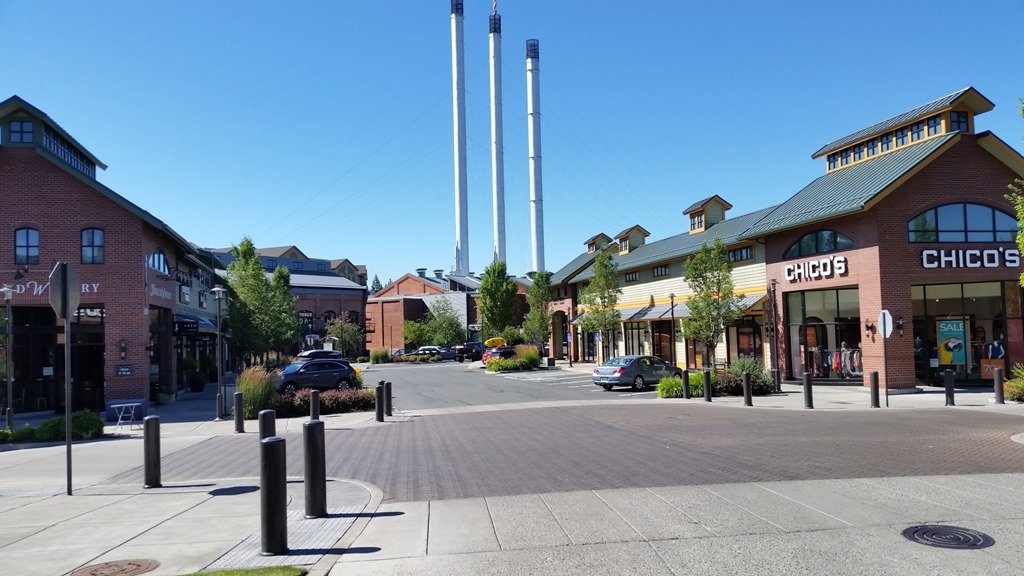 Bend Oregon is a reasonably small (76,000 people) city at the edge of the Oregon Cascade range. This young, active community, located on a plain between the mountains and the dessert, is the heart of one of Oregon’s premier outdoor sports areas with hiking, mountain climbing, mountain biking, whitewater rafting and kayaking, skiing, snowboarding, golf and many other outdoor activities.

It is also a young, vibrant, tourist city with boutiques, galleries, music venues and public art pieces that line its Roundabout Art Route. It has dozens of restaurants to feed people, and breweries, wineries, distilleries and hard cider mills to quench the thirst of residents and visitors after a tough day of outdoor exercise. And this does not even begin to consider the city’s now formalized and legal cannabis culture with its more than two dozen cannabis dispensaries and farms. It is, in other words, something like a less gentrified version of Boulder, Colorado.

Bend Oregon To Do

Downtown, a pretty, roughly 16 square-block area that contains many of the town’s boutiques, galleries and restaurants.

Old Mill District, a 1919 textile mill highlighted by three tall smokestacks, has been converted into a shopping, dining and entertainment complex that also has a few hiking trails.

Drake Park, a lovely Creekside park that, on a hot summer Saturday, was crowded with people, both on the bank and tubing, rafting and paddle boarding downstream

Tumalo Falls is a lovely, 97 foot-tall waterfall located in the Deschutes National Forest. It is accessible both from the base and from the top, via a short climb. We enjoyed both views plus an upriver walk through the hemlock forest.

Pilot Butte State Park, a one-mile, 480-foot elevation gain walk or drive (the trail is alongside the road) to the top of one of the many craters of the Newberry Volcanic Range. The summit provides a 360-degree view from the summit which has interpretive panels that describes the 26 million-year geological history of the regions, the two million-year history of the Newbury range and the 188,000-year history of the Pilot Butte cinder cone. The top provides views that range from the Cascades, including Mt, Jefferson, Mt. St Helens and Mt. Hood to the west, to the city and to the desert to the east.

Newberry National Volcanic Monument, which enclosed parts of the 120 sq. mile Newbury Shield lava flow that contains several hundred cones (including the Pilot Butte Crater) that erupted over the last two million years and that remain active, erupting roughly evenly 300 to 3,000 years. The largest of these eruptions, which occurred 75,000 years ago, was 100 times more powerful than the Mt. St. Helen’s eruption and formed a 17 sq-mile crater, took 1,000 feet off the mountain, created two lakes and a huge, dramatic obsidian flow, not to speak of miles of chunky, sharp, A’a-type, basalt lava fields, lava casts of trees and the longest exposed lava cave in North America.

The two visitor centers have large displays explaining the various types of volcanic structures, eruptions (explosive pyroclastic, ashfall, lava flow, mud flow, etc.), rocks (pumice, rhyolite, basalt, ash, obsidian, etc.) and the particular geologic history of the Newbury flow area. It was a semi-tropical shallow sea that began uplifting 40-90 million years ago when the Juan de Fuca tectonic plate began to subduct beneath the North American plate, which created the western Cascade range. This sedimentary foundation was initially covered with a thick pahoehoe-style (think and viscous) lava flow about 400,000 years ago from the massive eruption of nearby Mount Mazama (which now houses Crater Lake) and then in a blanket of a’a-style lava from multiple eruptions from a series of cones along the Newbury rift zone (a linear series of cracks in the earth’s crust that expose a series of volcanic vents). The largest of these occurred 300,000 and 80,000 years ago, with the most recent about 22,000 years ago.

Among the most interesting of the stops we made in the large, fascinating, still seismically- and thermally-active (although not currently erupting) site include:

Oregon has legalized cannabis…as has many states. But it also has some ingenious cannabis aficionados who have put together a fun and very educational tour–Tris (or Twis) and Stacy from Blazing Trails. The tour began with a very informative, introductory PowerPoint presentation that began with the history of cannabis sales (from the pre-1948 sale of medicines, through criminalization and the different stages of decriminalization (1973), recriminalization (1996) and medical/therapeutic (1997) and adult recreational (2014) legalization of the weed; then through the

OK, who knew all of this stuff. It was so educational. And no question was left unanswered.

Then the tour, which began at Crater Lake Spirits. This place sells CBD-intensive cannabis-infused spirits (vodka, gin, whiskeys, etc) and selected beverages (including ginger beer), foods (including olives), sauces (including chili) and balms (including honey). After tasting a few of the spirits, we then went to the Columbia Crest cannabis farm that grows CBD-intensive medicinal/therapeutic cannabis; spending winter in inside rooms with fluorescent lighting, spring in greenhouses and summers in the field, where it roughly doubles in size every month until it reaches a mature height of about eight feet. They explained the difference between male and female plants (the females produce the valuable flowers and the males the seeds) and how they eliminate the males plants; how they are planted; how the reduction in sunlight prompts flowering, the yield (about a quarter pound of bud per plant and how the current oversupply of cannabis is affecting prices.

At the next stop, Hempies Boutique, we saw and learned about all types of cannabis accessories, including pipes, waterpipes vaporizers, nectar collectors, bud (glass) and oil (silicone) storage containers and even the padded bags in which people carry glass paraphernalia.

After passing and learning about some peripheral cannabis businesses, such as grow shops (for grow-your-own users) and delivery services (including to assisted care, nursing and hospice facilities), we arrived at our final stop, Dr. Jolly’s Cannabis Dispensary. This visit provided an overview of all types of different edibles, tinctures, beverages, oils and buds. They explained and we smelled the differences between sativa, indica, hybrid, concentrate and CBD (with no THC) buds, the appetite-suppressant effects of THC-V, and we discussed the relative advantages and disadvantages of smoking and vaping buds and oils and the virtues of cannabis oil pens.

Overall, this was a fascinating and very educational overview of the history, the experience of and the culture that has developed around cannabis in one of the first states to fully legalize medical (which has since been embraced by most states) and recreational cannabis. Whether you imbibe or not, this is a great way to educate yourself on the cannabis industry.

Wild Rose Northern Thai Eats, a Northern Thai restaurant to which a friend took us on our first night in the city: This is the best Thai food that we have been to outside of Thailand…and that is saying alot from foodies like us. We ended up splitting four delicious dishes and a bottle of 2016 Sokol-Blosser Pinot Gris. The dishes were Turmeric Curry Clams, Mussels Hot Pot with ginger curry , fish sauce-marinated chicken wings and the unanimous star of the evening, Khao Soi Yellow Curry with chicken and egg noodles. Although we have always enjoyed good Northern Thai food, this was a special treat.

So much so that, after reviewing many of the alternatives, we even decided to return.something that we rarely do. This time we had a very good Avocado and Prawn dish (with shrimp sauce, snow peas and carrots) plus a another delicious re-do of our previous visit’s favorite—Khao Soi Yellow curry. This time with a 2016 Mantlerhof gruner veltliner. Well worth the return visit, even if that meant forgoing other, as yet unexplored restaurants.

Ariana, Bend’s most popular fine dining and celebration restaurant, has an interesting menu and a nice wine list. We had three dishes accompanied by one of our favorite Oregon pinots, a 2015 Ken Wright Shea Vineyard pinot noir. After a white gazpacho (with olive oil and basil) amuse bouche, we had two main courses: a delicious braised rabbit leg with cannellini beans and arugula; and equally delicious, perfectly cooked seared jumbo scallops with a crab risotto which could have had more taste. We finished the dinner with a very nice butterscotch budino with caramel sauce and whipped cream.

Jackalope Grill, where we began with escargot with garlic and shallot butter, followed by a marrow bone with sourdough toast; and pan-roasted elk medallions with blackberry-red wine sauce and truffle mashed potatoes. Both were good, although not with the complexity or subtlety of the dishes at Wild Rose or Ariana. Wine consisted of a 2015 Willamette Valley pinot from Lavinea Winery’s Lazy River  Vineyard.

Our lunch options were severely limited by being in Bend over the weekend, when many weekday lunch spots, such as Zydeco (southern) and Mezze (Middle Eastern) restaurants were open only for dinner. The best options we could find were brewpubs, from which we chose two (one for each day).

Wall Street Suites. This is a remodeled motel a short walk from downtown. When you see it from the outside, you get very nervous. The room was remodeled and the bathroom had a large shower and a small refrigerator and coffee maker. You have an assigned parking spot in front of your unit. The staff went out of its way to be helpful. When we left, they asked what they could have done to make things better and they really meant it. It was comfortable and maybe a little overpriced for what it was. Someone said it was a boutique hotel. I am not sure I could call it that, maybe a boutique motel.