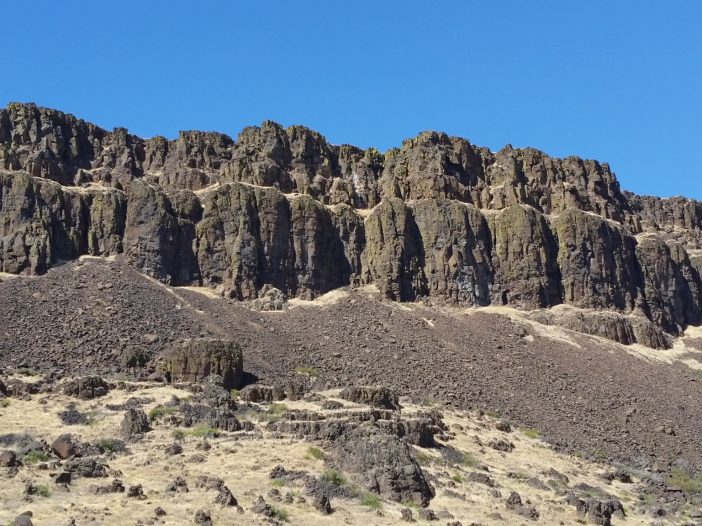 The Columbia River Gorge is the largest national scenic area in the United States and has the greatest concentration of waterfalls in North America.

Formed by the powerful Columbia River, the gorge goes along the Oregon/Washington border. It is both a rugged, scenic wonderland and home to one of the region’s many wine regions (on both sides of the border).

Although we would have loved to visit Washington’s premier Wala Wala wine region, which is much further east of this gorge trip, we contented ourselves with tastings at three Gorge wineries that friends recommended. These are:

We then followed a somewhat zigzag route west along the Oregon and Washington sides of the river to experience some of the majestic mountains, cliffs, waterfalls, and rainforests that surround the river until we reached The Dalles.

This small city stands at what used to be some of the most dangerous rapids on the Columbia River until the dam was built. This made it a convenient Indian trading point (as identified by the Lewis and Clark Expedition) and later, the launch point at which settlers loaded their wagons onto rafts for the remainder of their dangerous journey west. Although it is now somewhat run-down, it does have a number of 19th-century homes, churches, and commercial buildings, including the clock tower, a number of commercial buildings, and a house that is now part of The Dalles Museum. It also has a wonderful Columbia Gorge history museum and access to many outdoor activities.

The Columbia Gorge Discovery Center and Museum profiles the creation of the gorge, its plants, wildlife, and history, from Native American’s discovery and settlement of the area through the Lewis and Clark Expedition, its pioneering and steamboat histories, and the role of salmon in the area’s culture and economic life.

The museum profiles the region starting at pre-ice age times. Mammoths, saber-tooth tigers, and other giant animals owned the land, before they went extinct as food became more scarce, and many (with the exception of bighorn sheep, muskox, mountain goats and a few others) went extinct. The ice age, however, created the Bering Land Bridge, which was probably responsible for the earliest migration of homo sapiens to the new world.

The museum tracks the history of the subsequent development of the region from initial Russian, Spanish, French and English explorers and Captain Vancouver’s 1792 discovery and initial 110-mile navigation up the Columbia River, the initial forays and settlements by trappers, trading companies, including the Hudson Bay and North West Companies) and missionaries and especially, the commissioning and 1805 arrival of the Lewis and Clark Expedition. While the region began attracting naturalists, artists, and writers, active migration and settling began in 1837 by settlers, farmers, and ranchers looking for new opportunities and the 320 free acres of land the federal government offered to permanent settlers.

It was at his point that The Dalles rapids became such a major obstacle. While it was initially believed the area could be navigated by going from the Missouri to the Columbia River with only a short portage, the actual trip proved much more difficult. The Dalles alone required either a tortuous five-mile portage over boulders through deep mud and dense forests or a very long, very difficult detour through steep mountain passes.

By the 1850-70s, transportation was eased via a small railroad, the Oregon Trail toll road, and scheduled steamboat lines. By 1915, the Corps of Engineers had completed an 8.5-mile canal and by 1940, the Bonneville Dam.

A large exhibit profiled the Lewis and Clark Expedition whose goals were to document, draw and map the territories, collect specimens and especially, find a navigable route to the Pacific. While President Jefferson and Congress initially authorized only $2,500 for the expedition, total costs were 2,000 percent higher—one of the first major government cost overruns. The exhibit documented the exhibition’s 60,000 pounds of supplies, a record number of animals (especially deer, followed by elk and bison) that they killed for food, the sometimes awkward (due to mutual misunderstandings) and ultimately successful relations with Indians, the gifting ceremonies and how they traded for directions, guides (including Sacagawea) and porters. It also explained the sicknesses (including malaria) and injuries and injuries that Lewis and Clark addressed (the expedition had no doctors) and how, miraculously, only one man ended up dying.

Another large exhibit focused specifically on the development of The Dalles and Wasco County. It traces the lives of the Indians and of the initial settlers and their creation of farms, ranchlands, and orchards. It recounts the mid-19th century creation of a string of army posts from The Dalles to Astoria (where the Columbia reaches the Pacific), the role of the mini-1860s gold rush in drawing more people to the region, and the pressures of improving transportation and mail delivery.

Salmon have always played an important role in the area’s history. Indians had a reverence for the salmon and held annual celebrations in its honor. Commercial fishermen viewed them a bit differently, continually searching for the most efficient ways of harvesting salmon. They progressed from spears, nets, and hooks to skeins and ultimately to the fish wheel, a river-powered wheel whose buckets picked up enormous quantities of salmon, the record being 42,000 tons in a single day!

The processing of this salmon also changed from when individual fishermen cleaned and filleted their own catches to the 1858 opening of the Dalles’ first salmon cannery.  Chinese workers mostly staffed the cannery since they were the only people who would work six 11-hour days per week for so low wages and no complaints. This scale of production, however, took its toll on the salmon. Annual yields plunged from a peak in the 1920s to being all but depleted by the 1970s. By that time, however, a dam had been built at The Dalles, allowing it to attract a new aluminum smelter and other manufacturers.

The museum also had a reconstruction of a period main street, with its storefront windows, tools of the trade, and merchandise.

We stayed at The Dalles Inn, a surprisingly nice place to stay . They originally put us on the first floor even though we had requested a higher floor on our reservation. A person checking in right after us was given a second-floor room and offered to switch (thank you). Since a second floor was available when we checked in, it was interesting that we were not given that room first. Oh well. Other than that, the room was comfortable and the staff was very helpful. It was clean, comfortable, and located within walking to food.