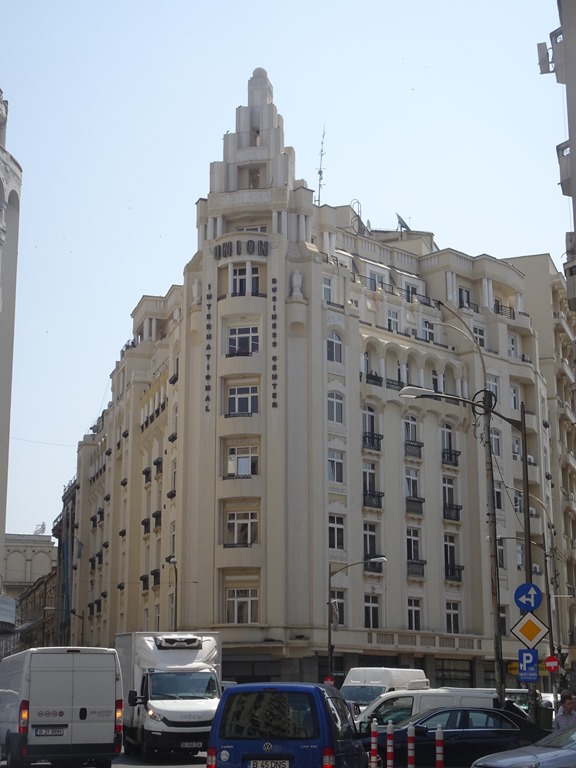 Next on our itinerary: Romania, another country to which this was our first visit. This “prolonged” visit was only a whole four days—not alot of time, but enough time to give us a feel for the country.

Romania’s early history is, not too surprisingly, relatively similar to that of Bulgaria. It was initially settled by Thracian tribes about 5,000 years ago, Greeks entered in about the 7th-century B.C., followed by the Romans in the 1st-century A.D. By the Middle Ages, the company split into three areas, each of which was ruled by a feudal leader. By the 10th-century, Hungary conquered Transylvania, the largest of the three regions, which it held until the Ottomans took control. The three territories, however, banded together and eventually drove the invaders out. While the three were officially joined after WWI, it was lost again before WWII. After some shifting alliances (from the Axis to the Allies), the three were again joined.

This victory, however, did not last long. By 1947, the Romanian Communist Party, supported by Soviet troops, gained control of the country. Between 1965 and 1989, during the Ceausescu reign, wildly spending programs virtually bankrupted the country and impoverished its citizens. By 1989, the pace of protests accelerated, ands with it, President Ceausescu’s violent repression. The citizens, however, eventually prevailed. The First Secretary was forced to resign and was soon tried and executed for his crimes against the people. By the mid-2000s, Romania joined both NATO and the EU.

Bucharest, the country’s capital and largest city, was the first stop in our exploratory tour. The city served as a royal residence, and thereby attracted wealthy citizens and considerable development. Its architecture draws on all stages of its history and all the cultural influences to which it was exposed, from Byzantine and Ottoman, to Roman and Hungarian and to Russian—both Tsarist and, unfortunately, Communist. And this doesn’t even count the smatterings of At Deco and Art Nouveau. The greatest and most pervasive influence, however, came from Paris. After just a brief time in the city, it is easy to see why it has sometimes been called, and its residents like to think of it as the “Paris of the East.” 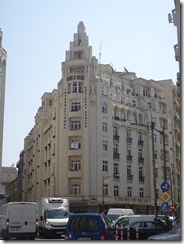 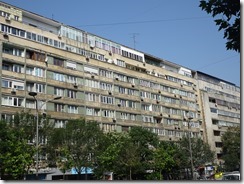 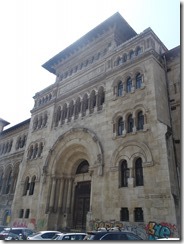 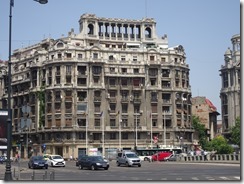 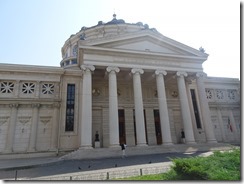 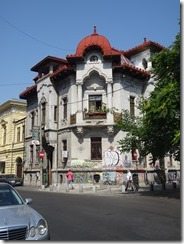 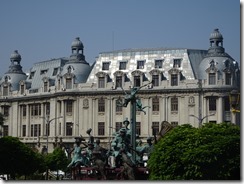 A noble aspiration, but a bit far-fetched. Although the city is certainly graced by a number of wonderful buildings, too much of its cultural and architectural legacy has been lost. The city suffered at the end of the Hungarians, the Ottomans, the Austrians and the Russians, and by a severe 1977 earthquake. Perhaps the greatest devastation cane from one of its own leaders. Communist First Secretary Nicolai Ceausescu’s development programs wiped away large sections of the city to build huge, drab, monolithic apartment blocks. Then, in his most grandiose move, he razed 82 acres of the city’s Old Town to build what is one of the greatest ego projects in history: the Parliament Palace.

Bucharest’s Parliament Palace, which was initially intended to be the Communist Party Headquarters, is the second largest office building in the world, covering 4 million square feet and occupying 90 million cubic feet of space—more than the Great Pyramid. And even though it was built with 90 percent Romanian materials and labor, it was still the most expensive construction project in history. 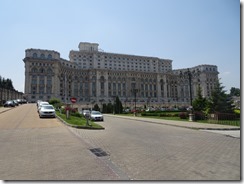 The project, and the sacrifices that it imposed on the citizens is, in fact, one of the factors that led to Ceausescu’s overthrow. And while the country thought seriously of canceling the project, it was already 60 percent finished and virtually all of the materials had already been paid for by the time the regime was overthrown. So they continued work and finished the building.

As we learned in a 1.5 hour palace tour, this huge, 18-floor (nine above and nine underground) complex houses both Romania’s Chamber of Deputies and its Senate. In addition to parliamentary chambers and more than 1,000 offices, meeting rooms, the building, completed in 2005, also houses a court, an international conference center, a theater, the Museum of Contemporary Art and several huge, ornate, marble auditoriums, state reception rooms and banquet halls—most of which can be rented out for events.

Yes, it is huge and yes it is grand. It is definitely worth a tour (you must reserve in advance and bring your passport). 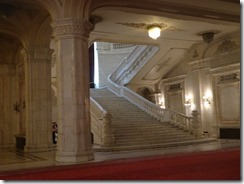 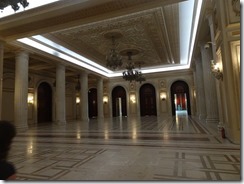 Speaking of government buildings, it is also hard to miss the monumental, intimidating Communist Party headquarters building from which Ceausescu and his predecessor once ruled. In sharp counterpoint to this symbol of oppression is a large marble needle, that faces the headquarters, that memorializes the thousands of people who were killed during the 1989 revolution. 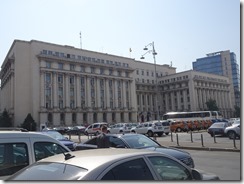 Bucharest, of course, also has more than its fair share of churches. Among the most historic and most beautiful are the: 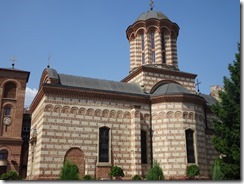 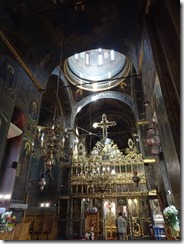 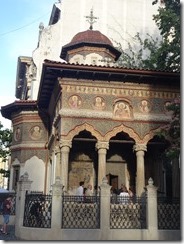 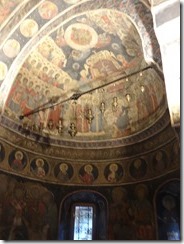 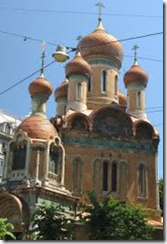 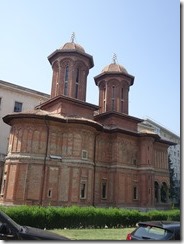 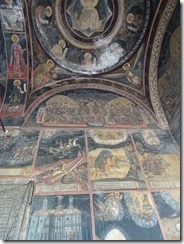 Our short time in the city, and frankly, the museum marathons that we staged throughout Italy and Greece forced us to make a choice: should we visit one of the city’s museums (the National Museum of History was at the top of list) or use the time to pursue or semi-occupation in the wine industry. Since we did not plan to visit any of the country’s increasingly regarded wineries, we chose the latter. We did, however, view and in some cases, step inside some of these museums to appreciate their architecture. Among the more interesting of these buildings are the: 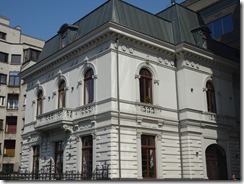 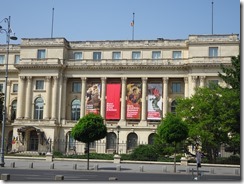 Most interesting of all, however, is Old Town, or at least what’s left of it. While Communist-era buildings managed to pop up in every corner of the city, Old Town still has a number of lovely historic structures that now primarily house restaurants, bars and a significant number of discrete (primarily on second of third floors) massage parlors. While busy during the day, the area is, as would be expected, packed at night.

It is, in fact, the place that we ended up spending all of our afternoon and evening. Although a portion of this time was devoted to exploring some of the area’s churches, we spent most of our time at restaurants and, in a purely educational pursuit, at a wine bar where we got a crash course on some of the country’s wine regions, grapes and some of its better wineries.

Hanul Lui Manuc is an Old Town institution. Occupying a vast courtyard inside an historic, three-story, 19th-century inn, the traditional Romanian restaurant consists of several bars and tables spread across the courtyard. Tom began with a very good plate of veal marrow bones topped with grated white cheese. For our main courses, Joyce had an order of very good pork cabbage rolls and Tom ventured to try a red wine-based stew that contained a huge range of protein, from beef, to pork, the veal liver, sausage, chicken and for good measure, a fried egg (interesting, although not his favorite stew). Both dishes came with two large scoops of polenta, topped with grated white cheese.

Lacrimi Si Sfinti was our dinner choice. Another very popular Old Town spot, this with a modest outside space and a large inside area, especially in its charming, arched, brick basement. Joyce tried to reprise her lunch success with another take on pork cabbage rolls (these, however, seemed overcooked and over-salted). Tom fared better with a very nice Transylvanian porcini soup and lamb chops. While Joyce stayed with her standard drink of wine (Pinot Grigio), Tom was pleased with an alternative of lemonade with tiny hundreds of specks of tasty basil suspended in the drink.

Abel Wine Bar, which is one of a number in Old Town, offers a choice of two Romanian wine tastings, a standard and a premium, the latter of which we chose. We initially decided on a combination of two whites and three reds. For each selection, the sommelier comes to the table with two wines, explaining and providing a taster of each. We then choose the one we prefer (or ask them to offer other options if neither of these are to our taste). They then poured generous tastes of the chosen wine. This gave us a chance to learn about and sample ten wines from wine regions from across the country. The tasting was accompanied by a plate of five Romanian cheeses (a young sheeps milk pecorino, a smoked, kashkaval, goat mozzarella, feta and cows milk with walnuts) with Romanian honey and orange-ginger marmalade. (we enjoyed the last three cheeses and the honey.)

As for the wines, we began with tastes of four whites. Although the 2017 Villa Vinea gertziminer (from Transylvania) to be too floral for our tastes, we were impressed by the 2016 Aurelica Viginescia Winery’s (from the Dealu Mare region, north of the city at the edge of the Carpathian Mountains) Anima chardonnay, with just a light whiff of oak, to be very pleasant.

We then sampled two other whites: We found that the prominence of muscat in the 2017 Solo Quinta, five-varietal blend (primarily chardonnay and muscat) from the Banat region (southeastern part of the country) to distracting for us to appreciate the other grapes. After a description, without getting around to a taste of another white, we decided to modify our tasting to one white and five reds although in truth, we got into such a discussion with people from the next table (who were doing the same tasting) as to lose track of the number of wines we tasted. We did however, find a number of wines that we enjoyed.

Our red tasting began nicely, with Domaine Panciu’s 2016 Panciu Reserve, a wine from the babecasca grape (grown in the Bozac region, just north of Bucharest) and then proceeded to another pleasant local varietal (Licorna Winery’s Seragim, which is based on a moderately oaked (6 months in neutral oak) expression of the Feteasea Negra grape (from the Ploiesti region, near Sinaia), whose spice and light pepper reminded us of a syrah. After a couple of misses (a big 2016 Via Marchizuoi from the Dealo Mare’s region’s negro de pragasani grape) too spicy for our (especially Joyce’s) tastes and the 2014 Crama Ratesti cabernet (grown near the Ukraine border) that tasted like sour cherry. The 2015 Prince Stirbey’s light expression of the novak grape (from the Ortenia region, southwest of Bucharest) was somewhat reminiscent of a pinot noir. We ended with the highlight of the tasting: a big, intense, 2015 feteasca neagra from 1000 de Chipuit winery with blackberry, a little leather and slight tannin. We were surprised to find that it went through carbonic maceration, spent no time in oak and was not aged before release. We were also surprised to learn that it had 17 percent alcohol.

InterContinental Hotel. While this was nice, it was not as nice as the one in Sofia. We had an issue with the AC not working well. They “fixed” it so that it was better but still not great. This is an older hotel that has been renovated at some point. You can tell the age from the old AC system (which is somewhat effective, but not great) and the dated bathroom. Still, it was comfortable and the best place in the city. Great location.