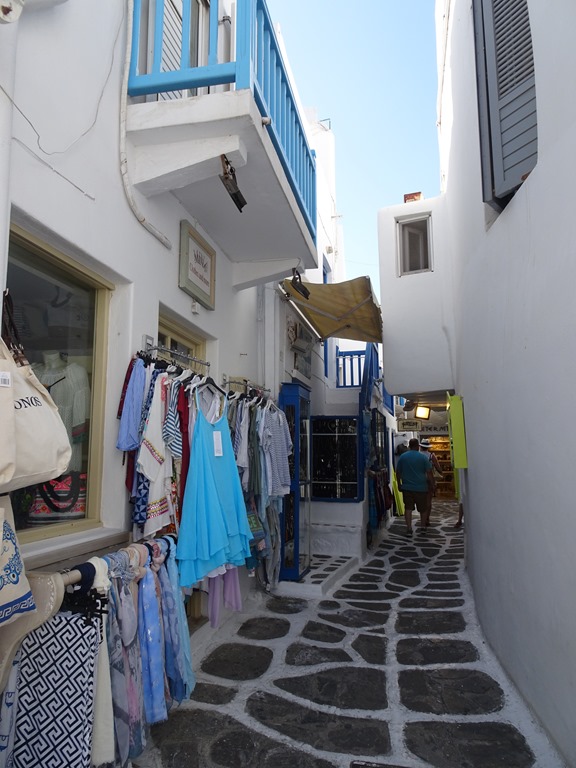 While the Santorini Island in Greece is known primarily for its atmosphere, its scenery and its wines, Mykonos is known primarily for its beaches and its nightlife. It attracts sun-worshipers and parties of all stripes and means, and more than its fair share of wealthy jetsetters and “yacht-setters” who order the crews to cruise their floating palaces to a destination of their choice, and then have their private planes fly them there for a few days of R&R.

Although Mykonos itself meets few of our Top Ten criteria for choosing a destination, we justified our choice on a desire to at least explore the famed island and for its easy access to its uninhabited, but archeologically rich neighbor, the island of Delos.

But Mykonos also has its history and its charms. Initially settled about 3,000 years ago, the island was mainly used as a stop-over point on the way to and from the Ionian settlement of Delos. In later centuries, it passed through the control of the Romans and the Byzantines. Then, after four centuries under Venetian rule, it was granted a form of self-governance, a period during which it grew prosperous on the basis of its skilled tradespeople and its sailors. By 1718, the island fell under the control of the Ottomans until 1821 and became part of Free Greece in 1830.

Over the last several decades, Mykonos has established itself as a tourist destination that is largely known for its beaches, its nightlife and its tolerance. The island of only about 10,000 inhabitants swells to about 150,000 during peak summer months. We visited in early June, when Mykonos Town, the population and administrative hub of the island, was mercifully free of the hordes.

The pedestrian-only town of Mykonos, like other archetypical Cycladic towns, consists of a warren of narrow alleyways that are lined with whitewashed buildings. While most of these buildings are cubic-shaped with flat roofs, some are asymmetrical to take advantage of every square inch of space. Many, meanwhile, have rounded, rather than square corners as a means of moderating the flow of the often strong winds.

Its alleys are attractively and smoothly paved with flagstones and white mortar and most of the buildings have lovely splashes of color, largely in the form of painted, (usually in some shade of blue or red, railings up whitewashed steps to the second floors), doors, balconies, windowsills and shutters. And then, of course, there are all the colors of the clothes, paintings and other tourist ware that line the walls of the thousands of the town’s shops. And the blue, red and white domes of the chapels, churches and cathedrals that seem to appear around every other corner. 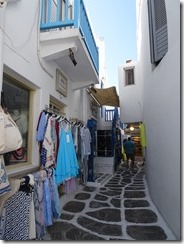 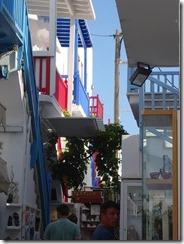 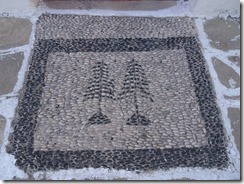 The town is generally divided into a number of different districts.

Mykonos’s heavy traffic of large cargo ships, cruise ships and ferries has largely been moved out of town to a much larger and more modern port several kilometers away, now called the New Port. The Old Port, which shares its small section of the harbor with one of the town’s small beaches, now accommodates a small number of pleasure craft and the dock from which the sightseeing boats to and from Delos are staged. The port itself is fronted by a small beach and a large open plaza, Plateia Mavrogenous, which is named after the heroine of the island’s resistance to the Turks. It is lined with restaurants and shops and is home to its Archaeological Museum, whose exhibits include work from Delos as well as from Mykonos itself (see below). 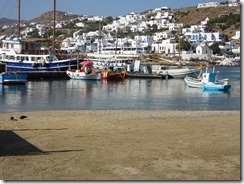 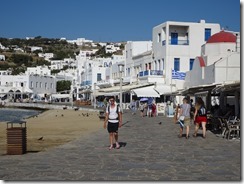 The Kastro District is the oldest and most historically fashionable part of town, lies just uptown from the harbor. Occupying the space that was once home to the island’s medieval fortress, it later become home to one of the city’s medieval fortification gates, grand sea captain’s mansions and the Folk Museum and the fascinating, all white, 15th-century Panagia Paraortiani church, whose unusual combination of shapes, corners and curves is actually attributable to its consisting of five distinct, small churches built next to and atop each other. 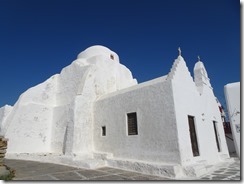 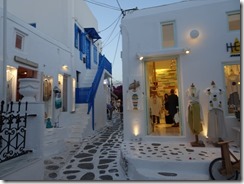 Venti or Little Venice is another waterfront area just up from the Kastro District. It is focused around Plateia Alexandras and the Orthodox Our Lady of the Wells cathedral. Its buildings, unlike those of many of the other neighborhoods, have wooden, open balconies, some of which are quite brightly painted. The neighborhood also has its share of museums (a Maritime Museum and the 19th-century Lena’s House mansion. 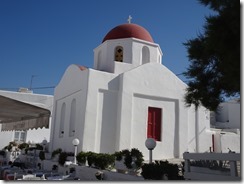 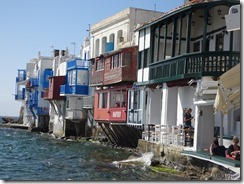 Mykonos is also known for its windmills. This line of half a dozen Venetian-era (16th-century) windmills, along the coast above Ventia, that has become a symbol of the city. 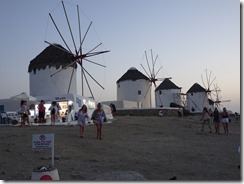 Matoliannia is the central “shopping district” (actually the entire, touristed part of town is one big shopping district) which houses stores of some of the more exclusive luxury brands. In reality, however, at least from our perspective, most of the buildings of these (with the exceptions of Panagia Parartiani church and some Ventia balconies) and other neighborhoods are so similarly attractive and the restaurants and shops that they house are so similar, that we were unable to distinguish among the different sections of the town. That, however, didn’t matter. We so enjoyed walking the streets, watching the shapes of the whitewashed buildings unfold and enjoying the combinations of different colors of paint, flowers and store displays of clothes and paintings play out, that we paid little attention to which of the neighborhoods we were in.

There were, of course, significant differences between the neighborhoods and the residential neighborhoods that were not frequented by tourists. Although the buildings were as just as freshly painted and their doors and railings and flowering plants were just as brightly colored as in the tourist areas, their stores and restaurants, to the extent they had any at all, lacked the flashy displays and sold the needs of everyday life.

Mykonos has a  tiny museum that is disproportionally mirrored (about 50 percent of the exhibit space and 90 percent of the museum’s design budget). It has a huge, suspended, semi-circular mirror suspended at a 45-degree angle over a small selection of admittedly lovely contemporary jewelry that was inspired by the museum’s large collection of two millennia-old pieces from Mykonos and Delos. 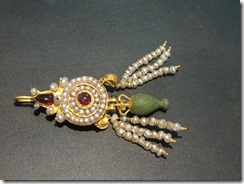 The museum also had a section of pottery and one of grave stelae from the two islands. 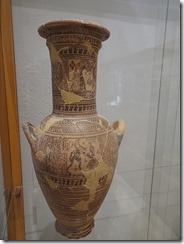 The highlight of the museum was a ceramic burial urn of an officer killed in the Trojan war. The urn, into which the body was placed in fetal position, was partially buried and partially exposed. The exposed section was covered with beautifully inscribed representations of battle scenes and, at the top, an unfortunately less well-defined, but still identifiable representation of the procession that pulled the famous Trojan Horse into the enemy’s fortress. 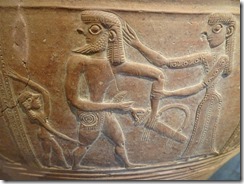 Eva’s Garden, a traditional, but highly refined Greek restaurant with a lovely, vine-covered and color-coordinated patio and balcony. It serves many types of traditional dishes, but always with careful attention to detail and often, some form of innovative twist. The service was both professional and fun and our young server was uncommonly familiar with the wine list, the country’s different wine regions and the characters of the different wines. We began with pita bread, Dolmades (the first stuffed grape leaves we found with minced beef in addition to rice) topped with egg and lemon sauce and a sinfully delicious fried, sesame-coated feta cheese with honey. For a main course, we shared the moussaka (minced beef, eggplant, mashed potatoes topped with béchamel sauce. And speaking of sinfully delicious, we ended with a bauoffee (homemade caramel with coffee liqueur) over a crumble of digestive biscuits, with banana and topped with vanilla ice cream and whipped cream. Dessert came with glasses of Tentura liqueur (from Patra). Our server recommended a very pleasant Merlot from the Drama region of far northern Greece, just a few kilometers south of the Bulgarian border: Chateau Julia Merlot from Domaine Costa Lazaaridi. We thoroughly enjoyed every dish, the wine, the atmosphere and our delightful and knowledgeable server. It is not very often that we can say all of that about any restaurant.

Kastro’s on the waterfront of the Kastro District, is one of the town’s top seafood restaurants. Our dinner began with delicious octopus stew in red wine sauce with pearl onions and then went downhill with what we thought sounded to be a very promising seafood misto for two with calamari, shrimp and seabream. While all were nicely fried to a light, golden-brown, the shrimp and the calamari pieces were so small as to be tough. Although the seabream was better, the quality, combined with the amazingly small size (smaller than a number of single-person portions we have had) given the ultra-steep 48 euro price, we felt both disappointed and ripped off. At least we were able to salve our disappointment with the beautiful views, the cooling sea breeze and a bottle of 2016 Sigalas assyrtiko/athiri wine.

Lithos by Spyros & Flora Agios Ioannis, Mykonos +30 22890 78989. This is a beautiful small hotel that is run by a person who definitely enjoys his job. The other TripAdvisor reviews say it all. Marios takes extraordinary care of his guest both before you arrive and once you are here. First the hotel. It is not in town but is a short bus ride (bus stop is in front of the hotel) to Ornos (where there is a beach as well as the water taxi to other beaches) and then a few more minutes into Mykonos. It is also situated within walking of other beaches. But if you don’t want a beach, the pool is very inviting. The room is very large and has a small kitchenette, refrigerator, hot plate, sink, some utensils and hot pot. The bathroom is a good size with a good shower. The air conditioning kept us cool in this warm island. Wifi went up and down a little while we were there but it seemed to be an island issue (electricity also went up and down due to some unusual issues the island was having). We had a large balcony with a beautiful view overlooking the water. It was a very relaxing and pleasant room. Before our arrival, Marios promptly responded to any questions we had and arranged transportation from the ferry terminal for us. Once we arrived, he provided us with an in-depth overview of the island, recommended restaurants, beaches, what to do and how to do it. He had prepared maps with the restaurants he recommended and the places he suggested we visit. We had him arrange a tour of Delos. Since our ferry left at a time in which the buses weren’t running, he gave us a complimentary shuttle to the ferry versus having us take a taxi. The staff was all excellent too, particularly Petko who took care of the luggage and manned the pool bar. As you can’t drink the water, bottles of complementary water were available at the pool bar. Nothing was left to chance. Overall, it was a great place to stay.