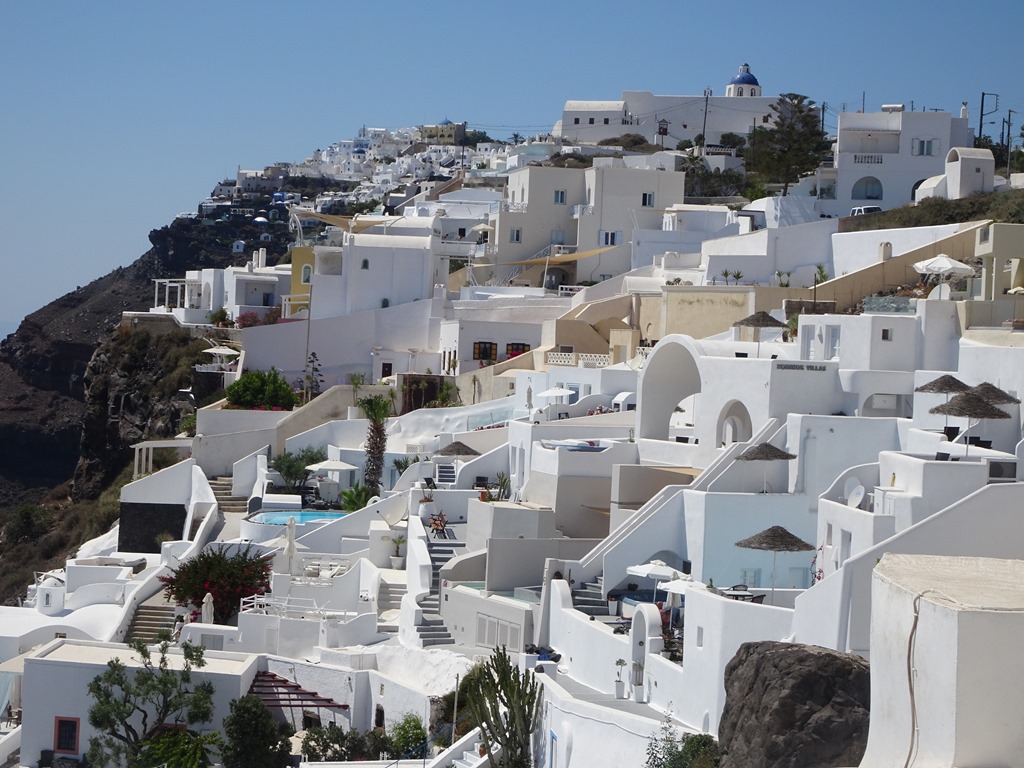 While we wanted to visit as much of Greece as we could in the time we had there, Santorini was the place we most anticipated.  Why? As the first of three islands we are visited in the Cylcades Islands, it has:.

We used Fira as our base for our 3 night stay on Santorini. Fira is the island’s capital and largest town. It overlooks the famed caldera. Extraordinarily young as Grecian towns go, it was founded in the late 18th century. It, however, was largely destroyed in a 1956 earthquake and had to be rebuilt.

Our first impression on arriving in Fira, was effectively, terror. We arrived by ferry where multiple vendors surrounded us to sell us a ride on their minibus to take us up the steep slopes to our hotel. Each proclaimed they were “leaving immediately”, which basically was a false statement. We choose one and were eventually put in a mini-bus with several others going into Fira.

After going up the steep “mountain” and being let off at our hotel and checking in, we walked down the rather ugly and very congested main street. We had to decide whether we wanted to walk the narrow sidewalk (where there was one) and face a gauntlet of aggressive restaurant and shop promoters, or brave the street, with its wall-to-wall traffic (people, cars and motorbikes) coming at us from every direction. And let’s not even talk about the heat that radiated off of all of the concrete buildings and walkways. We couldn’t imagine (nor did we want to experience) how much more congested and hotter it would be in the main season.

Gradually, by choosing alleyways more carefully and moving beyond the center of town, we were able to escape the worst of the congestion, find some interesting shops and restaurants and most importantly, take in some of the incredible views (both 800 feet down to the sea and the remnants of the volcano, and the lovely whitewashed buildings), it is hard not to become enchanted. 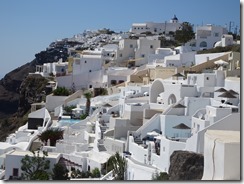 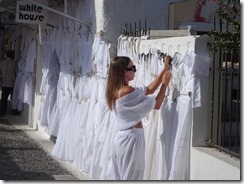 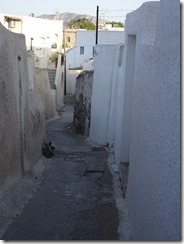 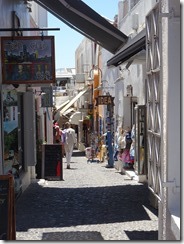 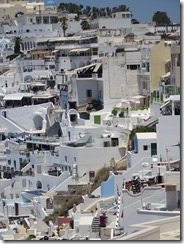 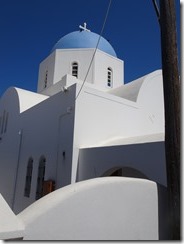 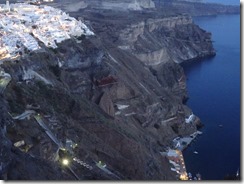 Nowhere is this charm more pronounced than along the caldera rim street of Agiou Mina, which houses the church whose blue dome graces virtually every postcard and website. 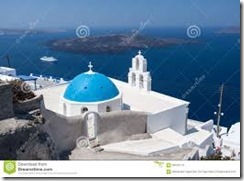 And it is almost like Disney Land at night. 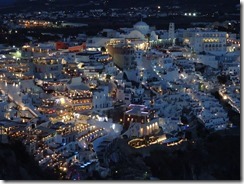 Although the town does have history, with several museums and restored 17th and 18th-century mansions, we spent most of our time just walking the alleyways. There is also a beautiful Rim Trail, a roughly four-hour walk that rewards you with stunning views in all directions from the centrally-located town of Fira to the island’s northernmost of Oia. We walked some of it before the heat became overwhelming and called uncle.

We also took some excursions through some decidedly non-touristy, residential neighborhoods. Although the alleyways were more winding and irregular, and the stores few and far between, the buildings are very similar to, and just as white and freshly painted as those in the tourist sections.

We also spent time in Oia, another beautiful, white and pastel town laid out along the ridge of the caldera at the north tip of the island. A prosperous commercial town, it too suffered badly from the 1956 quake. Like Fira, it also rebuilt without sacrificing its traditional charm. Many of its buildings, including some of its imposing Captains Houses, are constructed of rock and mortar, with some still sporting the red stone that is common in the area.

The perpetually crowded, narrow, marble alleyways are lined with shops and restaurants, many of which offer wonderful views over the rest of the island, the center of the caldera that has popped above the surface in the center of the harbor, and of incredible sunsets. While this can be viewed from some of the city’s restaurants and bars (including the one at which we ate dinner), one of the most popular spots is the fortress at the northern tip of the island. 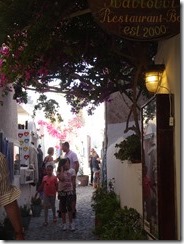 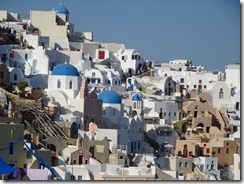 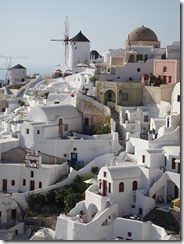 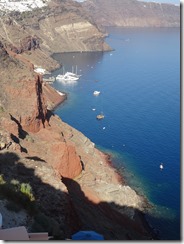 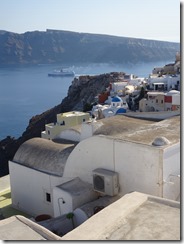 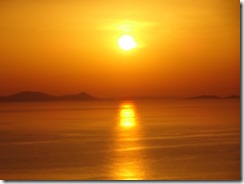 Just past the fortress, a steep, but scenic stairway takes you down to a seaside port named Ammoudi. Once a small fishing and shipbuilding, it is now used primarily to shuttle tourists to and from cruise ships. 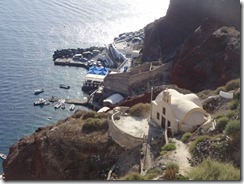 Ancient Thira is atop a step cliff on the southwest corner of the island. It houses the ruins of a small, 8th-century B.C. Dorian town that, centuries after being largely depopulated due to drought, became the site of an important Ptolemaic naval garrison in the 3rd-century B.C. Officers and aristocrats built lovely homes in the center of the city, atop the hill, while those of fewer means were relegated to lower areas. When the fleet was moved, the town was largely abandoned until the 5th-century A.D. Remnants include walls from a number of the homes in the town, the foundations of the Agora, the Stoa, the gymnasium and the theater, as well as an early Christian Basilica and stone carvings from a monument dedicated to an important priest. 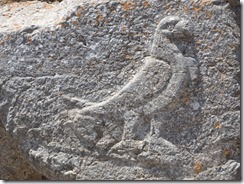 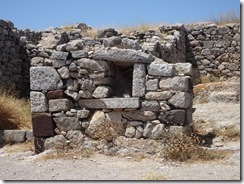 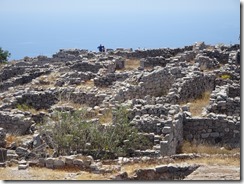 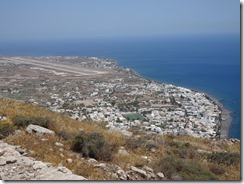 Akrotiri was probably settled as early 5,000 B.C. It now houses the island’s earliest documented settlement, the roughly 1500 B.C. remains of a Minoan settlement that was buried under the mud and lava of the roughly 1450 B.C. eruption whose tidal wave went on the destroy much of the Minoan capital of Knossos, Crete. After being rebuilt after a couple earthquakes this small, Aegean harbor grew into a prosperous Mediterranean trading port before its untimely demise. The town, buried under volcanic mud and ash, went undisturbed until the mid-19th century (A.D.) when it was discovered by French archeologist and, beginning in the mid-20th century, began to be systematically explored by a Greek archeologist.

The fascinating site, which is now enclosed in a permanent structure, continues to be explored while also being open to the public. It consists of dozens of well-preserved two-and-three story stone and mud buildings that are laid out among streets and plazas that you can walk both through and above. The mud and ash preserved a number of water pipes, storage jars, cooking utensils, figurines and also a number of frescos (photos of which are on display, with originals in Athens and Fira museums). It also preserved a number of now empty holes that archeologists filled with plaster or liquid plastic to show the outlines of some of the wooden furniture that has since disintegrated. Overall, an amazing site, even for those with no interest in archeology or the history that it reveals. 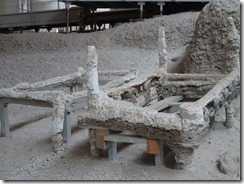 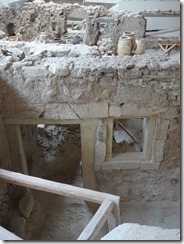 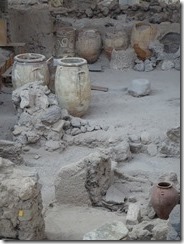 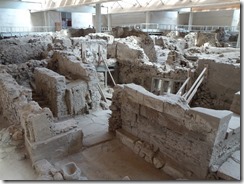 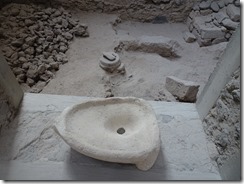 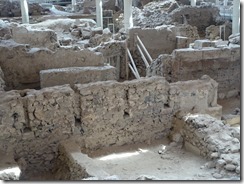 Niki’s, a Fira restaurant that is perched at the edge of the cliff provides stunning sunset views. It also has quite respectable food and on our visit, very good service (especially from Ilias, the passionate and engaging sommelier. The spaghetti with lobster was quite nice, although we prefer New England lobsters. The lamb souvlaki was the nicest cut of lamb Tom has had since we got to Greece. (it also came with tzatziki sauce, pita and nicely roasted sliced potatoes). We chose a nice, crisp, unoaked 2016 assyrtiko from Argyos. To complement the lamb, Ilias offered a lovely alternative to the house red—opening a bottle of Lantidi Estate’s Nemea Agiorgitiko for one-quarter the price of the bottle.

Aroma Avlis, a restaurant associated with Artemis Karamolegos (in the town of Exo Gonia) was a treat. Probably the best meal we had in Greece. We began with pan-fried white aubergine that was then put into a casseroles and baked with tomato sauce and topped with yoghurt. Then two main dishes: sautéed seabass fillet with tomato, capers and assyrtiko wine sauce, and pan-fried veal fillet in Vinsanto sauce with basmati rice. We both had a glass of one of the wines we just tasted at the winery, a 2017 Karamolegos Assyrtiko/Aidani blend. The complementary finish was a small carafe of winery-made Limoncello and orange spice cake with ice cream. The food was wonderful, service, friendly, professional, prompt and totally accommodating of our time requirements. A wonderful experience.

Naoussa is a Fira restaurant with another lovely view. Our lunch began with a tasty plate of grilled Pleurotus mushrooms with garlic and vinaigrette, followed by two main dishes: a whole grilled seabass and chicken in lemon sauce. All fine, although the service was far slower and less responsive than we would have anticipated or desired.

Strogili is a rooftop restaurant in Oia where we had a perfect table from which to watch the town’s renowned sunset. Neither the sunset, the food, the wine nor the service disappointed. Food consisted of only two dishes: a platter of Greek dips, where we sampled, in declining order of preference; Santorini fava (which are actually split peas rather than fava beans), hummus, tziziki and marinated white eggplant, all with pita. This was followed by sautéed shrimp wrapped in zucchini with coconut sauce and a mango tart. Both were very good, as well as yet another bottle of Assyritko, this a 2017 from Gavalas Winery.

To Bricki, in Thira, was are only real disappointment, and it was a big one. We had two small dishes: steamed mussels with white wine, garlic and lemon zest, and fried squid with fish roe dipping sauce. Despite the very different dishes, they had one common characteristic: They tasted like cardboard. Even the sunset, of which we had another good view, was disappointing (the only evening of our three night stay). On the positive side, we did enjoy our 2017 Argyros Assyrtiko.

We ended up staying at 2 different hotels as we couldn’t find one hotel that had availability all 3 nights we stayed in Fira.

Hotel Daedalus. This was not the greatest 4 star hotel we have been in. Our room and bathroom were both “cozy”. Read small. While we can expect small in some cities, this seemed really small. For example, there is no place for the necessary trash can in the bathroom other than in the middle of the bathroom if you want to be able to open it. Our room was on the first level. We could hear doors opening and closing in the hotel. We had a small balcony, but in order to open the door, you need to move your luggage as there is no other place to put the luggage without tripping over it. Breakfast was not very inspiring. This was the first and only experience we had in Greece where everything seemed to come from a can or box (example, fruit packed in juice versus fresh fruit). But on the good news side, the towels were nice and soft. However the shower was a “rain shower” which was more like a drip shower Not a repeat visit in our mind.

Costa Marina Villa was where we spend an additional night. It was in eastern part of Fira town and off the main street. While it was only 3 stars, it was clean, comfortable, more spacious and the staff in very helpful. Room was laid out well and it had a great shower. Given the 2 hotels, we’d choose this one.