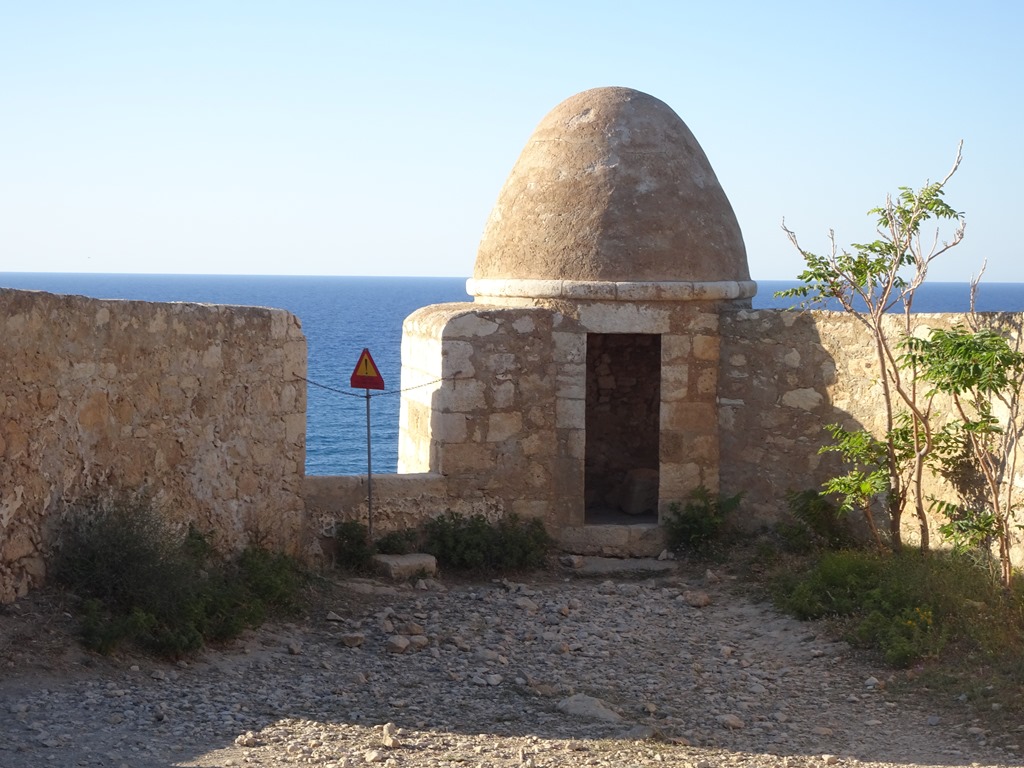 Rethymno on the Greek island of Crete is a 16th-century, Venetian Old Town. It  has few must-see sights:

The Rethyemno Fort was designed to protect the city from relentless pirate attacks and also serve as a deterrent again the Turks, who still ended up capturing the city in 1646. It contains the Mosque of Sultan Ibrahim as well as several churches. It also has nice view. 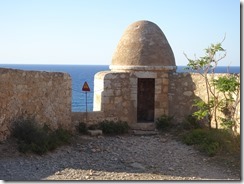 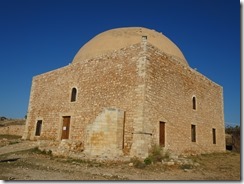 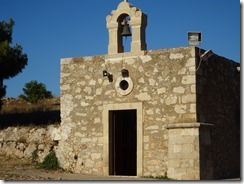 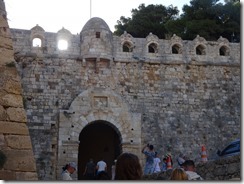 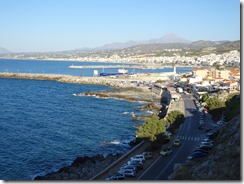 The Nerantzes Mosque was originally built as a Venetian church and converted into a mosque by the Ottomans in 1657. 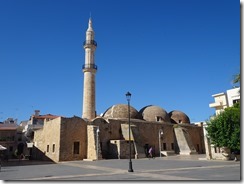 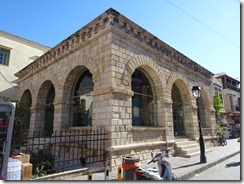 The Loggia, a small, but elegant Venetian structure that is now used as a cultural center gallery.

Antistaeos Street is a a narrow, old-town pedestrian street and is lined with shops and leads from the city’s primary gate toward the fortress and the harbor. 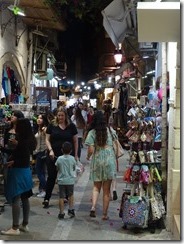 In addition to specific sights, Rethymno is a a charming town. Its old town mandates slow strolls in which you just wander along any street that happens to catch your fancy. It has numberous beautifully-restored 17th -century buildings, shops and its many traditional Cretan restaurants 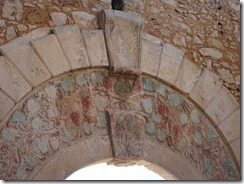 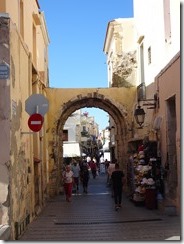 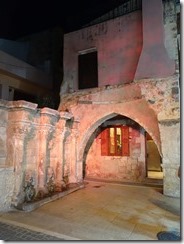 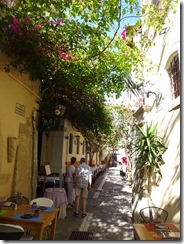 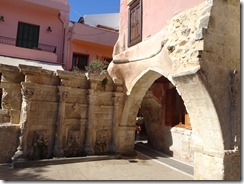 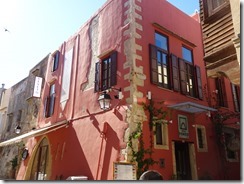 Rethymno’s Harborside is another beautiful area. It has nice views of the fortress and lighthouse and has seemingly never-ending rows of seafood restaurants with their displays of ultra-fresh fish and huge, outdoor seating areas. 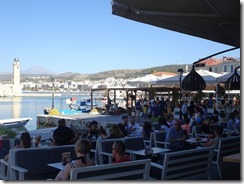 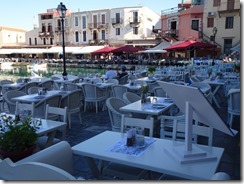 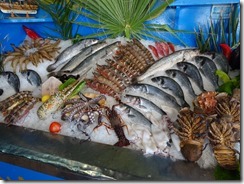 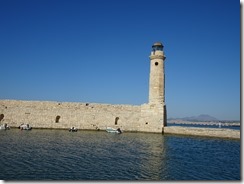 We had one dinner inside the walled city, and one lunch, just outside the city on a seaside restaurant with lovely views of the rocky coastline, a relaxing beach and a lovely view of the walled Old Town area.

Taverna Galera, is on the shore, just west of the city.  Joyce had a very nice seafood salad (lettuce, tomato, tuna, calamari, octopus, mussels and Louis-style dressing). Tom had a very un-seafood like dish that has been on most of the Cretan menus we have seen, pan-fried calf’s liver. Although we were very pleased with both our dishes and the view, the service left much to be desired. 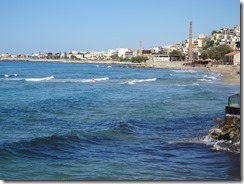 Melina is a dinner restaurant that offers three dishes (lamb, chicken and pork belly) that are cooked in a way that we rarely see: once in El Califante, Patagonia, in southernmost Argentina and once in Ushuaia Argentina. The meat is stood vertically about a foot from a fire, with the fatty side well-salted and facing away from the flames. The meat is cooked in this manner for several hours, while the fat steadily drips away and the outside layer turns crispy. We ordered two dishes cooked in this manner. The lamb was just as we remembered from El Califante: juicy, with a crisp surface, and delicious. The chicken was somewhat less successful, having lost too much of its moisture. But dishes came with a medley of oven-roasted vegetables: potatoes, carrots, zucchini, eggplant and red, orange and green peppers, all of which were quite good. Wine was a bit of a saga, after being told that our first three selections were not available (they had only about a third of the wines on the list), we ended up settling for a 2016 Miliarakis Epudros Ocoos blend of Katsifali and Mantilaria, which we found to lack both character and substance. Bread came with a nice choice of sun-dried tomato and olive tapenade spreads for the bread and dinner was followed by a complimentary chocolate walnut cake with chocolate sauce and a carafe of Raki (aka, Tsikouro or Grappa). 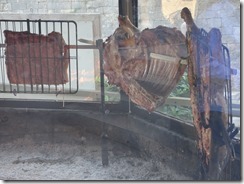 Menta City Boutique Hotel. The hotel was about a 10-15 minute walk outside of the old town walls and up a small hill. It is a fairly new facility…clean, bright, modern. Breakfast was on the top patio with a great view. Room was comfortable. The air seemed to shut off periodically. Not sure if we did something wrong or that was just how it worked. It was a reasonable price for a 4 star hotel, but the location was a factor in a lower pricing. We had free parking in front of the hotel.