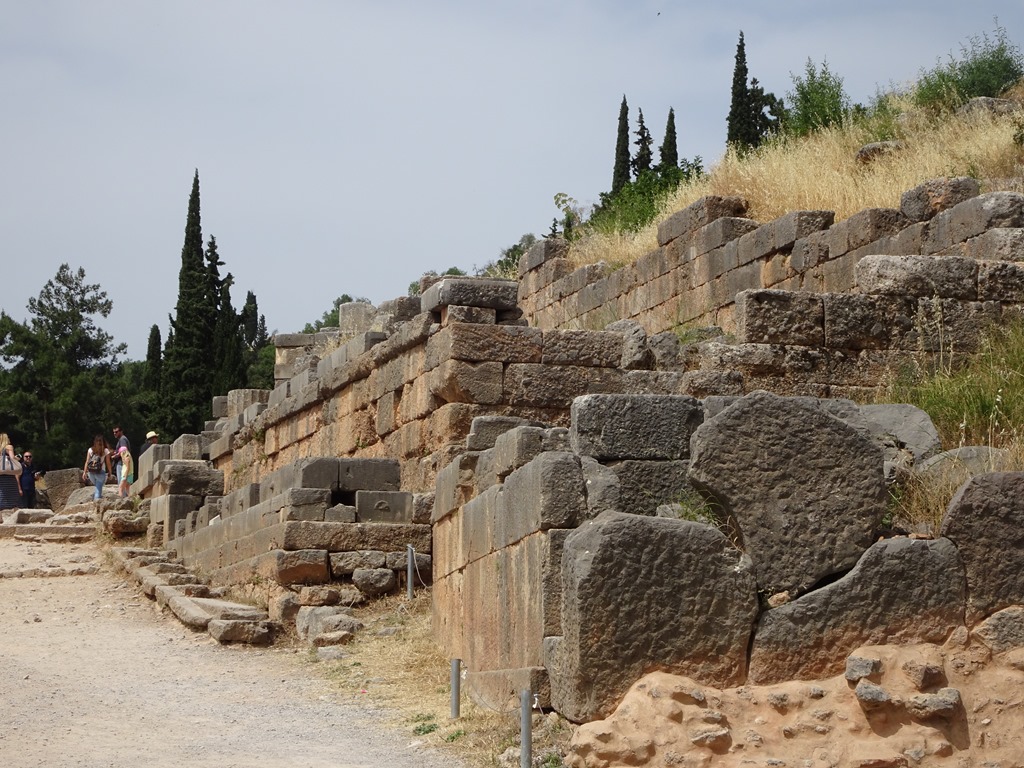 While in Athens Greece, we decided to take a day trip to visit the site of the Oracles that were instrumental in helping the ancient Greeks (in fact, those from all Hellenistic kingdoms) in making decisions on everything from whether to marry or buy a home or, for rulers, decisions on whether to make war with another kingdom. Rather than make the long drive and try to decipher the remains of the temple and its artifacts on our own, we took a tour offered by GoTours.

The long, two-plus-hour drive took us past historic sights that we caught glimpses of from the bus windows:

Along the way, our guide told us of the mythical and practical founding of Delphi. The myth: Zeus released two eagles, ordering them to fly in opposite directions and designated their meeting point as the center of the earth. (Sounds like the ancient Greeks determined the earth was round about 1.500 years before the rest of Europe). The more practical rationale was the location of a fissure in the earth’s crust from which escaping gas (probably some form of natural gas or sulphur dioxide) created a stupor which was interpreted as a trance in which the subject would hear the voice of Apollo.

This led to the founding of the site in the eight century B.C. and within another century, Delphi was recognized as the single most important religious site in not just the Greek world, but the entire Hellenistic world. People came from wide and far, by ship, to a steep climb up the sacred mountain, to honor Apollo and to consult the Oracle with questions ranging from a citizen’s decision to marry through a King’s determination as to whether to invade another country—in return for a payment and the sacrifice of an animal.

The Oracle, while in a trance, issues statements that, allegedly, could only be interpreted and communicated through a priest. A priest who, wishing to maintain his revered status and perks often responded in ambiguities that could be interpreted in different ways. As legend has it, in the mid 6th century B.C., King Croesus of Lydia, seeking advice as to whether to invade Persia, was told that an invasion would result in the defeat of a great empire. The empire, as it turned out, was his own. Alexander the Great, on the other hand, was, supposedly, told much more unequivocally, that he would conquer the world, which he was well on track to doing until he died at age 33.

The Oracles and the priests, however, provided something of another hedge to prognostications. The waiting chamber of the forum was, apparently, adorned with teachings of Greek philosopher’s: Teaching such as “know thyself” and “nothing in excess: everything in moderation”. The recipient of the projection, therefore, was supposed to interpret them in context of the teaching of the great Greek philosophers; philosophers who were enshrined in grand statues in the temple.

But despite the ambiguities and hedging, even the most war-prone of the Hellenistic city-states acknowledged the importance of Delphi and the need to protect it. They therefore entered into a confederation whereby each would donate some combination of money, men and equipment to protect the site. And to create a bond among the nations, they staged a Pan-Hellenic sports competitions every four years, the winners of which would be awarded coveted laurel (aka, bay leaf) wreaths. (A tradition that continued until it was eventually banned by the Romans.). But even this coordination and camaraderie couldn’t overcome the city-states predefinition for and glorification of conquest. Athens, for example, built a monument on the Delphi grounds commemorating its victory over the Persians. When Sparta defeated Athens in the Peloponnesian War, it constructed a monument commemorating its victory—placing it directly across from the Athen’s monument.

But nothing it seems, not even Apollo, lasts forever.

Entry into the temple complex occurs in stages. First, a walk through the shops of the Roman Forum, a shopping complex. 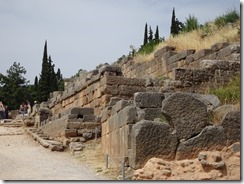 The traditional road to the ceremonial site began just after the Forum with a walk up the marble-paved Sacred Way. This road was lined by about 3,000 monuments (including those commemorating Athens victory over Persia and Sparta’s over Athens). While some of these monuments remain in the Delphi Museum, more than 500 were apparently, appropriated by the Roman Emperor Nero for his palaces. Among the monuments, each of the city-states and clans also had their own Treasury Houses in which members of that clan placed statues and other tributes to the gods. Although only the Athenian Treasury has been rebuilt, parts of this and other buildings are displayed in the museum (see below). 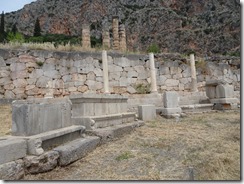 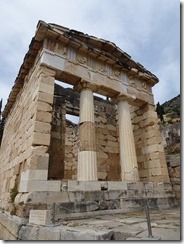 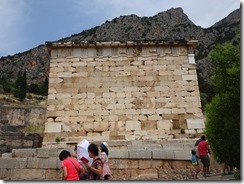 The Rock of Sybil, now little more than a platform, was the spot from which the priestess pronounced the oracles that would be interpreted by the priest. Nearby, a green (representing the oxidized bronze of the original) helix-like spire on which a gold trident was mounted. Just beyond used to be the Altar of Chiots (now in Istanbul) on which animals used to be sacrificed before entry into the temple waiting room, which was lined with statues of and quotes from the great philosophers. The temple itself, which used to be the most grand of the structures, currently consists of only a platform and a few columns. It was here that the priest interpreted the Oracle’s pronouncements to the accompaniment of music from the theater that resides a few dozen meters above the temple. 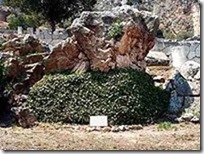 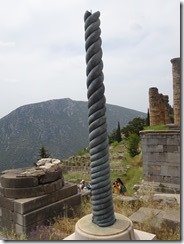 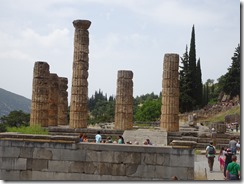 While most people go from the temple to the museum, we took a detour, up a few dozen meters (elevation gain: not distance) to the 2,500 year-old, 5,000-person theater, and then a hundred or so meters further to the stadium, which was built by the Romans. 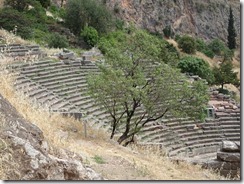 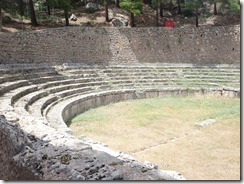 The Delphi museum displays some of the most important remnants of the Sacred Way, the Treasury Houses and the Temple grounds. It begins and ends with birds-eye representations of the way Delphi would have looked in its heyday, about 600 B.C. and provides a representation of the huge ivory and gold statue of Apollo. It provides examples of many of the types of offerings that would have been placed in the Temple Houses and reconstructions of some of the monuments that lined the Sacred Way. 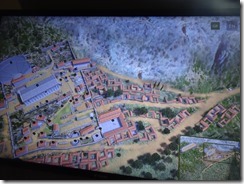 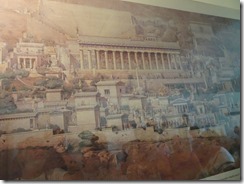 There are decorations and pediments that had been recovered from a number of the Treasury Houses, many of which, in typical ancient Greek fashion, represent battle scenes: some actual (as from the Trojan War), some mythical (as in battles between gods and giants). 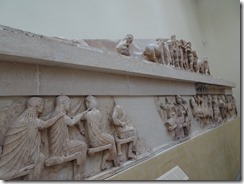 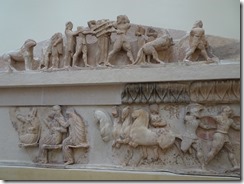 And of course there were kouras, some about 10 feet tool: Some in marble, some in ivory and gold (the latter of which no longer exist). Also other life sized-figures, such as wooden bull covered in pressed silver, one of Dionysus (also ivory and gold). There are marble representations of life-sized athletes and philosophers (especially Socrates) and one of Antioos, who was Hadrian’s lover. 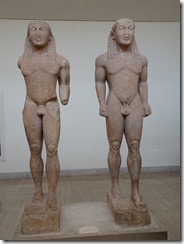 Then came the highlight of the collection, a 419 BC bronze of The Charioteer, a figure who, in the original as mounted on a chariot with a team of horses. Although only the winner of the chariot race survives, it is magnificent, even though it is no longer covered in pressed gold with ivory eyes and dark pupils. The beauty is not just the majesty of the figure, but also the details such as the fingernails nd toenails, the muscle tone and the hair, curling form the sweat. Quite a conclusion to the an overview of what was once the most revered and elaborate site in the entire Hellenistic world. 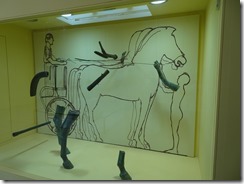 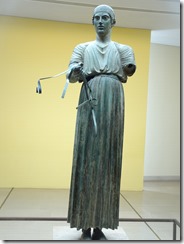 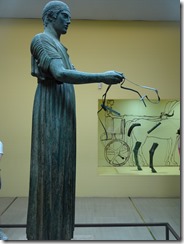 Apollonia. Although we had little choice but to eat at this tourist stop (this is where the tour stopped for lunch), we passed (wisely) on the fixed menu that was part of the tour in favor of a la carte ordering. Although it was not gourmet dining, we did find two of the three dishes we ordered (cabbage rolls with lemon-egg sauce and moussaka) to be pretty good and only found one (spinach pie) that we wished we had not ordered. And while we, along with one other a la carte couple, sat separately from the rest of the group, we even found the service to be pretty good.