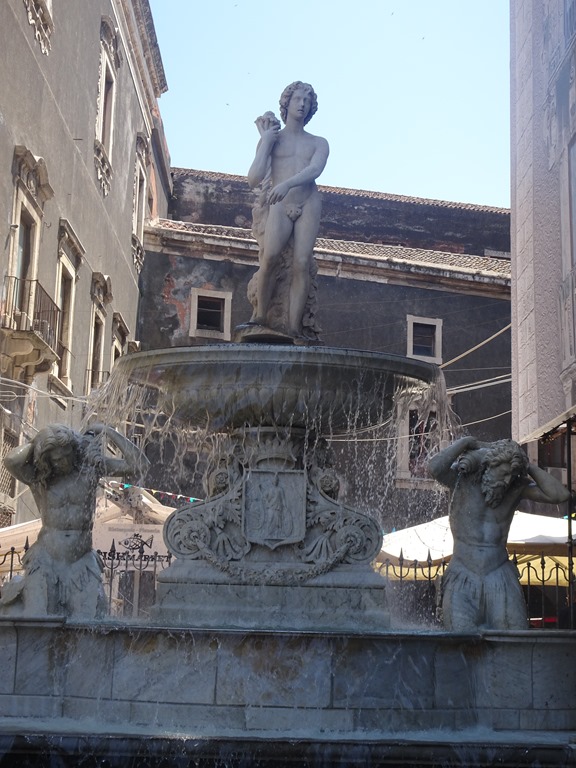 Catania is largely an industrial and shipping city. Like most of the other southeast Sicilian towns, it has suffered more than its share of devastation; certainly from the huge (7.4)  1693 earthquake that destroyed many cities in the area, but especially from numerous Mount Etna eruptions.

Although Catania is certainly not one of the island’s prettier cities, it does have some lovely buildings, especially its Doumo and a number of its churches and palazzos. But, while most of its neighbors built their Baroque buildings in limestone, many of Catania’s are built from the black lava so generously provided by Mt. Etna. 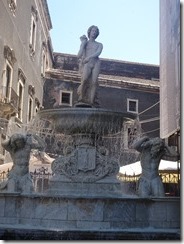 The grandest and most lovely of these structures are in and around Piazza del Doumo. That piazza is dominated by the huge, lovely Badia di Sant’Agata cathedral with its multiple and elaborate sculptures. The plaza is also home to the pretty Palazzo Senatorio (the town hall) and the Elephant Fountain: A fountain topped by the symbol of the city—a black lava elephant that carries an Egyptian obelisk on its back. And other lovely marble fountain, tucked in a corner of the square, is almost lost amidst its larger neighbors. 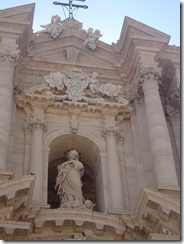 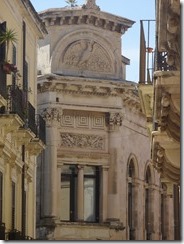 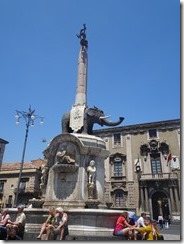 Piazza Doumo is surrounded by a number of other piazzas, most with their own ornate churches, public buildings and fountains. For example: 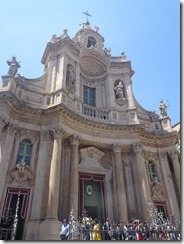 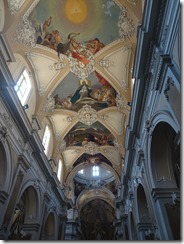 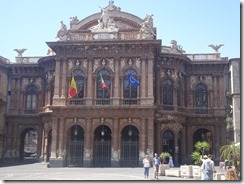 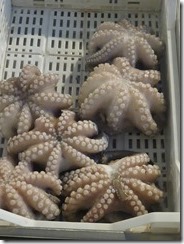 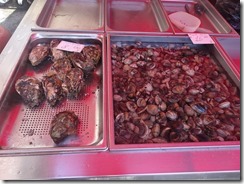 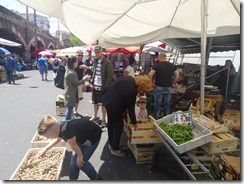 A number of the city’s other Baroque masterpieces are located on streets away from the major piazzas. Some, such as Palazzo Biscaria, Palazzo Cultura and a number of others, have very ornate entryways, balconies or other decorate details, but otherwise, relatively plain facades. 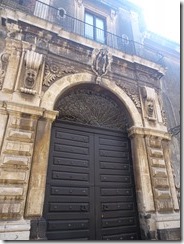 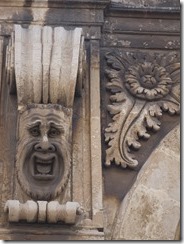 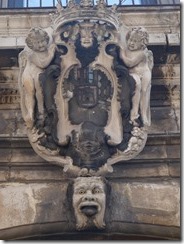 A few, like Palazzo Sanciungi and Palazzo Mangonelli, have much more elaborate facades. The day we visited, the Palazzo Mangonelli was home to an upscale crafts and artisanal food market in which every room was filled with tables displaying everything from blouses, jewelry and other accessories to desserts, snacks, wines and liqueurs. We looked briefly at everything, tasted and bought some snacks and even got to taste four Mt. Etna wines and a Crème de Cacao liqueur. For the most part, however, we were far too awed by the palace’s rooms and gardens to pay much attention to the products. Mangonelli is one of the most beautiful mansions we have ever visited. Although each room is magnificent, each is different: different wall coverings and designs, different type of furniture and most have different marble floor designs. Most impressive, however, are the frescoed and coffered ceilings, each different and each lovely. 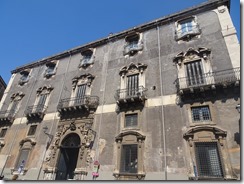 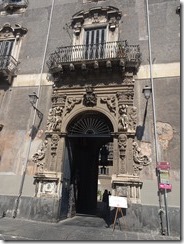 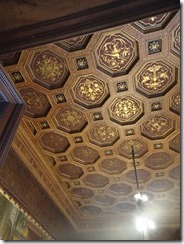 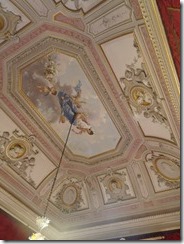 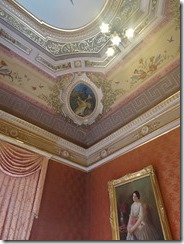 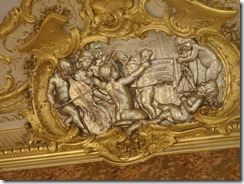 While all are engaging the ballroom, in particular, is exquisite. Virtually everything, other than the floor-to-ceiling mirrors and the ceiling frescos are in some shade of gold: fabric wall coverings, the gold mirror frames and the gilded stucco detailing. 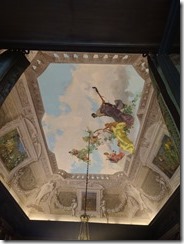 The gardens, both upper and lower, are also very nice, especially the patterned pebble sidewalk that leads alongside the building. We went in on a lark and left with a new sense of luxury. And oh yeah, the crafts were nice too! 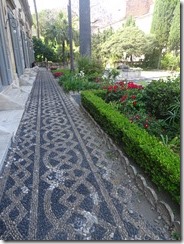 Although Catania does not have the rich Pre-Christian heritage or ruins of a Syracusa, much less of an Agrigento, it does have at least one small excavation of a Roman-era (third century BC) amphitheater, this, in the city’s Piazza Stesicoro. 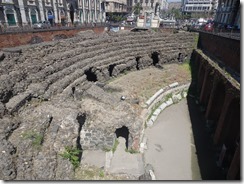 Right next to Pizaa Stesicoro, but on the opposite end of the time spectrum, is the city’s primary commercial shopping street, Via Etnea. This street is aligned so that, on a clear day (which we did not have), you are supposed to be able to see Mt. Etna. 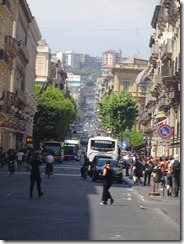 If it  weren’t for our need to fly out of Catania, this would not be on our “go-see” list. At least our tour of Palazzo Mangonelli made it more tolerable.

La Paglia Antica Trattoria. Our plan was to have lunch at the widely recommended Antica Marina Trattoria, one of the seafood restaurants surrounding the fish market. Hwever, we found it fully booked. Proceeding on the rash assumption that the neighboring, almost-filled La Paglia Antica Trattoria, which had an almost identical menu, would have similar food (and the similar entertainment of the ongoing fish market right in front ot it), we decided to take a chance. We shared a roasted mixed seafood platter of calamari, swordfish, prawns and octopus; spaghetti with sea urchin (like our previous Mediterranean sea urchin, earthy, but less sweet and somewhat more acidic than those with which we are familiar) and two glasses of a Mt. Etna Vino Blanco. We certainly weren’t blown away. Note to self: don’t expect a restaurant next door to a popular restaurant to be good.

Imagine Tom’s excitement when he discovered that donkey was one of Catania’s specialty food. It’s not that he had any latent craving for donkey meat, but anytime he runs into a new type of food, he has to try it. After a little research, he learned that Me Cumpori Turiddo was particularly well known for its donkey. He did not, however, realize that it is also one of the city’s premier slow food restaurants and would be packed on a Saturday night. (Nor, of course, did either of us even realize it was Saturday, sine we both lose track of days when we travel.) In any case, the restaurant was totally booked and our only option was to eat at the bistro, with a very limited menu. That meant that donkey ribs, donkey entrecote, donkey fillet and donkey meatballs with sauce were not options. The only donkey meat available to bistro patrons were donkey charcuterie (salami and mortadella) and donkey meatball sandwiches, with pate, cheese and tomato on housemade rolls. And since it was a slow-food restaurant, everything was sourced locally from vetted sources, such as the Ragusa donkey, the Giattatane onion and the Vestedda cheese. Perhaps, but it didn’t seem to help. Tom was hard-pressed to explain the taste differences between pork and donkey salami and mortadella and the meatballs, while nicely spiced, were dry and not especially enjoyable. Nor was Joyce especially impressed by her macaroni and cauliflower quiche with pepato fresca cheese and toasted bread crumbs. Perhaps another time with the full restaurant menu—and without the donkey. 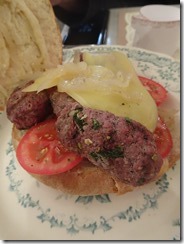 As our main reason for staying in Catania was to catch an early morning flight, we stayed at the Catania International Airport Hotel. The hotel is very close to the airport so it is convenient for flights. They have a shuttle bus that runs back and forth and was very prompt. But nothing else is around there. We had an issue turning on the AC but they sent someone immediately to fix it. Comfortable, clean and good for flights out. But we wouldn’t stay there for any other reason.