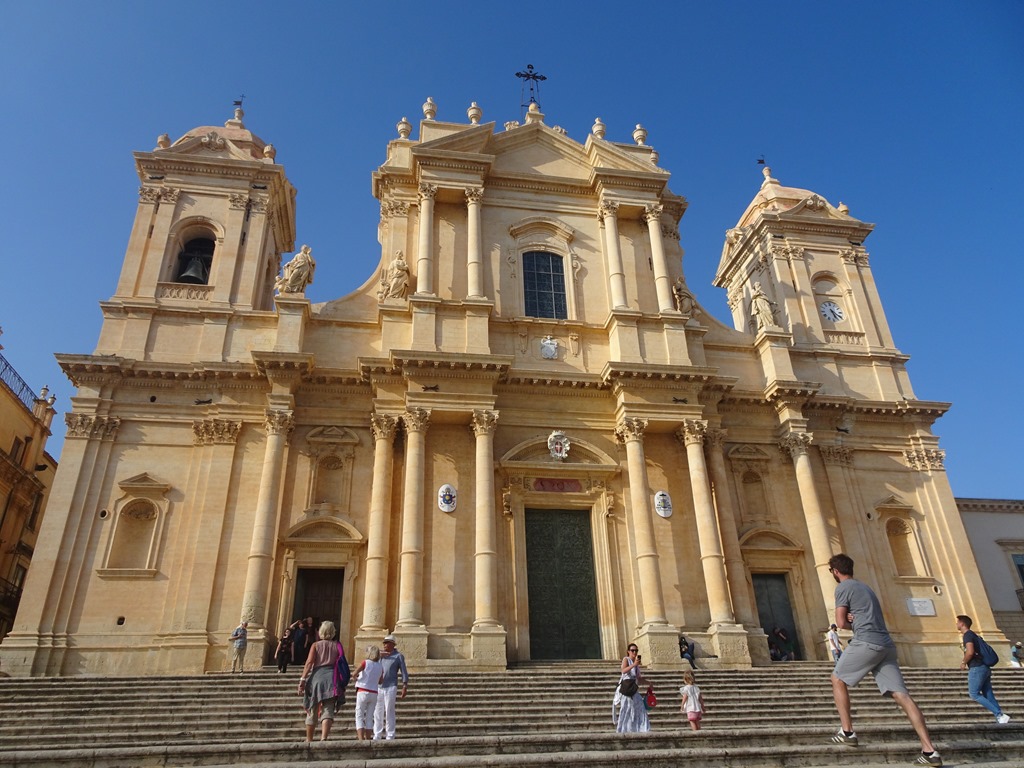 Noto is another Sicilian town in Italy that was destroyed by the huge (7.4)  1693 earthquake, which was the most powerful in Italian history and destroyed many cities. It is the showcase for Baroque of Val d Noto architecture. For a relatively small city, it has been graced with a number of beautiful buildings, as evidenced by the number on the UNESCO World Heritage list. This is particularly true for Basilica di San Nicolo (the Duomo), Palazzo Ducezio (City Hall) and Palazzo Nicolai di Villadorata, the1737 Baroque style mansion of dramatically frescoed and painted walls and ceiling of its ballroom. Even this grand three-quarter block-long Palazzo, however, pales in comparison with the even larger, gander Palazzo Trigona. 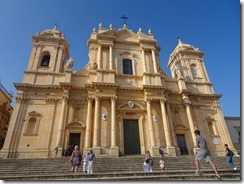 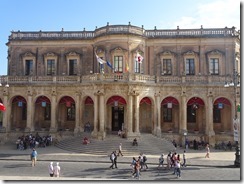 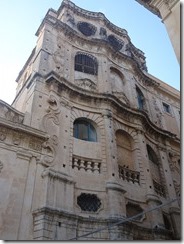 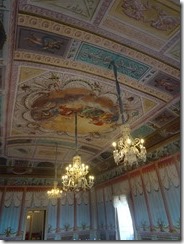 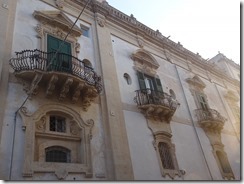 The city has dozens of beautiful (especially their exteriors) churches and some with unusual features, such as Chiesa di Montevergini’s concave and San Domenico’s convex façades, Santa Chiara’s oval interior. Interiors, however, tend to be much less elaborately decorated—usually white, with few paintings or frescos, perhaps some stucco or gold trim—than their counterparts that we visited in Rome, Amalfi and even Palermo. 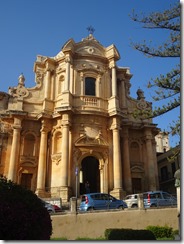 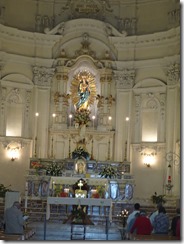 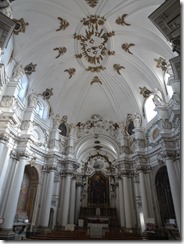 Most of these grand structures are built of the local, white tufa limestone that turns a soft, honey color in the sunlight. Nowhere is this shown to greater effect than on the west-facing façade of San Salvatore at sunset. A close second is the glow of the nighttime-lighted Duomo. 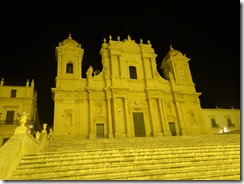 A Mastrra was our choice for our one dinner in Noto. We chose two very nice main dishes. Spaghetti with olive oil and sea urchin was very good, although Mediterranean sea urchin seems to be similarly earthy, but less sweet and somewhat more acidic than we are familiar with from California. We, however, had no reservations with the fish soup with swordfish, prawns, clams, mussels an calamari in a rich, flavorful tomato sauce. But how to pair a wine with such different dishes? Our server had a just the answer, a young, light, minerally, slightly fruity red from the volcanic soil and cool climate of Mt. Etna. In this case, a 2016 Tornator Etna Rosso that is a blend of two indigenous grapes, Nerelo Moscalese and Nerello Cappuccio. Nor could we resist the lure of a local ricotta cannoli, our first of the trip. Our server, however, felt that we could not truly enjoy this without another local specialty, a deep, brownish, Noto Moscato.

B&B Casa Ronco Camelia. It was clean and in a good location. Street parking was easy. They emailed me in the morning of our arrival asking me what time we would be arriving. As I get email when I am on wifi, I never saw the email. When we arrived at 5 pm (our confirmation showed checking from 2-8), no one was there and no one answered their phone. About 45 minutes later, they returned my call and we agreed to meet in about 10 minutes. Not a great start but he room was clean and bright. The mattress had deep indentations from many uses but it was comfortable. Although our host does not speak English, we figured out things together.She really worked hard to converse with us. It didn’t look like the room had air conditioning which was fine for May but we wondered about August as the temperatures get higher. Breakfast was very good with multiple things to choose from. There was also a washing machine in the kitchen. Not sure if guests could use it or not.