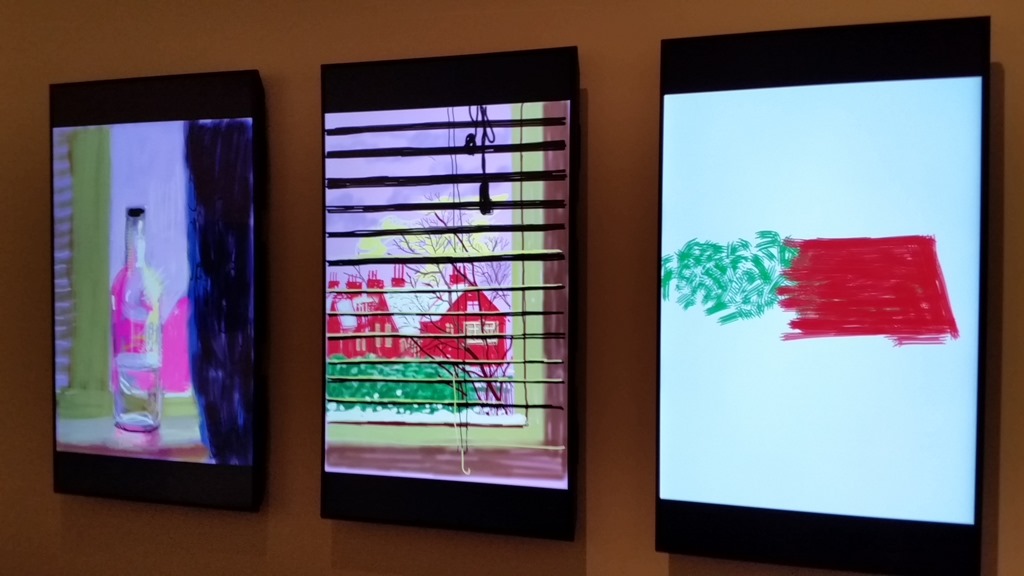 The New York Historical Society (77th Street at Central Park West) is a museum and library that focuses on the history of New York and the nation.

In 2017, we spent hours in this always fascinating museum. While we spent some time in its permanent collection reviewing the history of the city from its founding as a Dutch colony through the early 20th century, we spent most of our time visiting a number of its special exhibits.

This large (3,000 sq ft) exhibit portrayed the causes, conduct, consequences, and aftermath of the Vietnam War, both in Vietnam and back on the U.S. home front. The exhibit adds little to Ken Burns’ even more comprehensive PBS documentary. It, however, is an excellent overview.

It began with the aftermath of WWII when famine killed more than a million people and the Korean War prompted President Truman to begin the process that would lead through continual escalation through four more presidencies. It used timelines, photos, videos, panels, and select exhibits to profile the escalation, the key battles, the passing of the Tonkin Bay Resolution, and the Tet Offensive, which while technically failing, ended up demoralizing the South and America and strengthening the North’s resolve.

Throughout, it examined the ineffectiveness and corruption of the South’s progression of governments and especially, the War’s effect on the U.S. It examined the growth of the anti-war movement and the unequal impact of the draft which ended up with 40 percent of American men of draft age serving in the military—with 10 percent serving in Vietnam, 17,700 dying and tens of thousands of others suffering physical and emotional injuries. It discussed the growing polarization of the country in which 45 percent of Americans were against the war and many of the rest—the so-called “silent majority” provided the political support required to continually escalate. It examined how the war led Johnson to decide against running for a second term, Nixon’s (successful) efforts to sabotage the peace process for political advantage, and his and Kissinger’s ultimate negotiations of the Paris Accords, which led to “Peace with Honor”—the ignominious exit of the Americans and total victory the ultimate collapse not only of the South but also of Cambodia.

This exhibit portrayed how early 20th-century middle-class, bohemian women of Greenwich Village took up the banner of women’s suffrage from the late 19th-century pioneers of upstate New York (see our 2016 post on Seneca Falls’ Women’s Rights National Historic Park). It examined the birth of the movement in the garment industry strikes and Triangle Waistcoast factory fire of 1909 and 1910 and the WWI peace movement. It traced the movement through the efforts of its leaders, how it capitalized on glamor to tell its story, and the marches, mass demonstrations, and petitions that eventually helped lead to the 19th Amendment in 1920. It then briefly explained the aftermath and partial fragmentation of the movement, with some women dropping out, others running for office and others joining the fight for racial equality.

This photo essay traced JFK’s life in pictures, from his childhood, his marriage, and his glamorous lifestyle, through the Cuba crisis and his ultimate assassination.

This exhibit examined the evolution and role that maps played in the early history of the colonies, the country, the Northeast, and specifically of New York and the city—beginning with a map of the continent in which only the coastal areas were known with the remainder being a totally blank space.

This permanent exhibit explains how Louis Comfort Tiffany capitalized on the transition from gas to electric lights to build his eponymous company. It displays about 100 Tiffany lamps of multiple styles and explains how Tiffany expanded beyond his own creative efforts by the hiring of women (especially Clara Driscoll) and the other “Tiffany Girls” He used women primarily to design lamps and to select and cut glass while using men to solder the pieces and to cast the lamp’s bases.