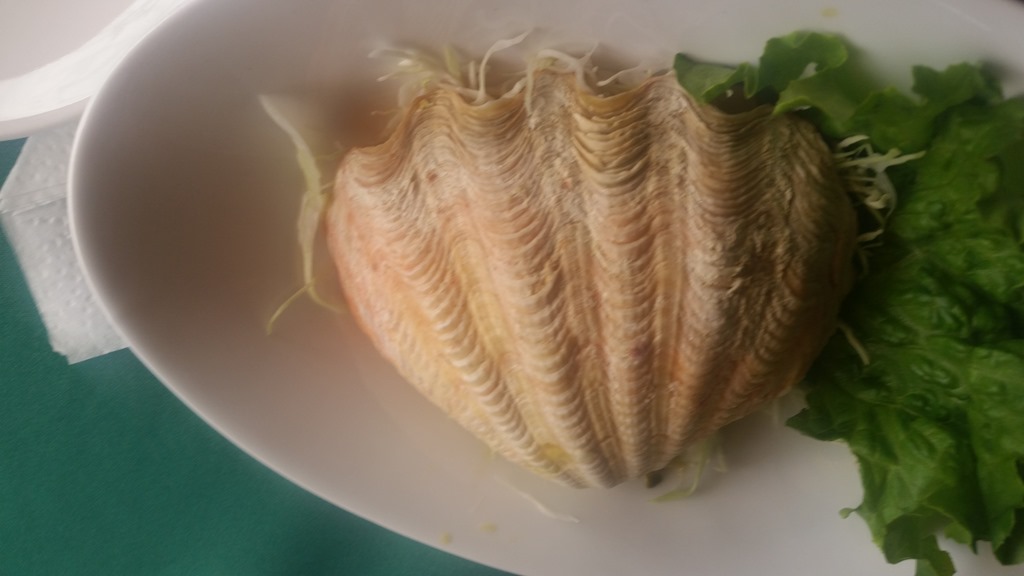 The island of Palau is the coral capital of Micronesia. The island’s lagoon and its ledges are known particularly for the drift diving and the pelagic fish of its famed Blue Hole and its Blue Corner wall dive. This being said, many of the island’s scenic coral gardens and colorful, tropical reef fish are also accessible to snorkelers.

Tom has wanted to go to Palau for years, from the days that we scuba drove (which we no longer do). While he was attracted to its legendary coral, his primary motivation had nothing to do with either coral or scuba diving. It was to snorkel in the land-locked brackish Jellyfish Lake. This lake is home to a species of jellyfish that have lived for so long without predators that they lost their ability to sting. While small jellies occupy the water near the surface, the larger adults, about the size of softballs, are somewhat deeper, although still visible from the surface and easily accessible to free divers.

Sounds fascinating? We certainly thought so. There was only one problem. Between the time we scheduled the trip and the time we got there, the lake had been temporarily closed due to unusually low water levels that killed a number of jellies and threatened the health of the entire ecosystem. We, therefore, had to “make do” with snorkeling among some of the most colorful, most beautiful hard coral, tropical fish and anemone in the world, with about 1,500 different species of coral and 450 of fishes. The waters around Palau’s Peleliu Island, meanwhile, has about 20 frequently dived wrecks and tons of abandoned war material. Although we saw some WW II artifacts on our kayak/snorkeling trips there, we decided to pass on Peleliu island to focus on the coral and fish of the Rock Islands. We had, after all, just come from three days of WW II wreck snorkeling and artifact exploration in and around Truk Lagoon, where we snorkeled shallower, more accessible wrecks.

The 240,000 square mile, 300+-island archipelago (mostly islets with only eight true islands) was formed by coral reefs that grew atop a 100 mile-long string of volcanic craters. Parrotfish (which created the sand which lays atop the coral) and mangroves (the salt water-tolerant vegetation around which organic material accumulated) did much of the rest. Waves and tides, meanwhile, eroded the base of the land, giving the coral islands their characteristic, mushroom-like shapes.

The archipelago was settled, primarily from present-day Indonesia and Malaysia, about 2,500 years ago. The British discovered it in the 18th century. It then was passed from the Brits, the Spanish and the Germans, before being given to Japan after WW I. Japan occupied and developed the island until 1944. Its reign ended with the bloody (10,000 American casualties alone), three month-long naval and amphibious Battle of Peleliu. The Japanese occupation, the battle and the nation’s liberation are commemorated in the form of wreck dives, abandoned war material and the country’s WW II museum. After being freed from WW II Japan, and becoming a protectorate of the United States, the nation gained its independence in 1994. Recognizing the importance of its pristine marine ecosystem, the country became a pioneer in protecting its seas and all that lived in them

Palau was, overall, a snorkeling super-destination for us. There was only one semi-disappointment. Since the waters of Palau are also a shark sanctuary that is home to about 130 different species, we expected to see at least a few smaller reef sharks. But, since we had the opportunity to snorkel with dozens of these, and their larger black-tip cousins in Bora Bora, we have no big complaints.

But before we talk about the wonderful snorkeling, let’s explore Koror Island.

Koror, with its 20,000 residents, remains by far, the nation’s largest city, with about two-thirds of its total population. Although it is no longer the capital, it has, by far, the largest number of hotels, restaurants, shops and things to do. Although most of these “things” are shopping, the Belau National Museum does provide a nice introduction to the country’s history and culture.

The museum provides a nice, compact introduction to the island’s history and culture. Its special, 50th anniversary exhibition is divided into three primary segments, from the country’s pre-Western contact days, through its colonial, WW II and post-war period, to its transition to democracy, independence and modernity.

It provides an overview of the country’s natural history and displays and portraying its endemic plant, animal and insect species, with particular discussions of its efforts to preserve and monitor the progress of endangered species such as megapodes and green sea turtles. Its pre-contact cultural exhibits discusses and displays traditional fishing and agricultural methods and tools and leaf and fiber weaving products. It has models of traditional Palauan buildings and outrigger canoes, discusses the importance of plants in the people’s traditional identity and its evolution as a matriarchal society.

The large section on Western contacts briefly mentions initial sightings, the initial contacts established by the crew of the British ship “Antelope” and how the islands were initially transferred from the British, to the Spanish, to the Germans, the Japanese and then, after WW II, to the Americans.

It briefly mentions the mercantile role of the Germans in developing the coconut/copra and bauxite mining industries and related infrastructure (piers, bridges, Post Office, telegraph, etc.). It also provided the foundations of a missionary-based educational system. In fact, by 1911, 87 percent of all pupils were enrolled in missionary schools.

The primary focus of the post-contact history section dealt with the Japanese period, from WW I to WW II, and on the cultural, economic and even religious affinity with Japan. An affinity that was significantly based on the fact that as of 1938, Japanese immigrants accounted for an amazing 70 percent of the population.

The museum also provided overviews of the evolution and current state of Palauan:

The discussion of the war, as provided by narrative panels and personal remembrances, also tended to suggest a sensitivity and cultural alignment with Japan. One story, for example, discussed how a son found his father floating in a river after being shot in the back by American fighter planes. Another spoke of a civilian who found a starving, emaciated Japanese soldier who refused the civilian’s offer of food since he knew that he was going to die anyway and did not want to deprive the civilian of the food. Or perhaps it was a means of creating a bond with the overwhelming number of Japanese tourists who visit the island and the museum.

The modern section of the exhibition essentially begins with the post-WW II American period, when the Americans introduced “strange” customs, rebuilt much of the country’s infrastructure, established schools in each of Palau’s districts and created the foundations of a higher education system. It explained how Palau expanded cultural and economic relations with its Micronesian neighbors in the 1960s, the political separation from the U.S. in the ‘70s, how the new country created its Constitution and Congress in the ‘80s and instituted a second Constitutional Congress, established a Senate and entered into a “Free Association” agreement with the U.S. in the 1990s.

Additional exhibits provide a much more expansive view of the Palau’s historic and current relationship with Germany, brief overview of its historic and current relations with Spain and a remembrance of Taiwan—especially of Southern Taiwan the home of the original settlers of Palau and the rest of Micronesia. Interestingly, there was no such exhibit on ties with the U.S.

Anthia Café, where we relaxed after a hard day of kayaking and snorkeling. We had three dishes all of which were flavored with coconut and all of which were good. We began with a few Palaun Ukhaeb crabs with coconut, followed with Palauan clam steak with coconut sauce and grilled local squid with the same sauce; the first with a selection of steamed potatoes and vegetables, and the second with a different combination of sautéed vegetables in the same coconut sauce.

Mog Mog, a traditional Palauan seafood restaurant where tom went native, beginning with Palauan Giant Clam in coconut milk and finishing with a dish that hejust had to experience: Fruit Bat in coconut soup. The clam was chewy and tasty and the soup, creamy and very tasty with loads of onions, parsley and fresh spices thrown in for flavor. Then there was the bat: laying atop the soup with its wings folded around its body. After the requisite pictures, our server removed the bat from the soup, unfolded it for another picture and then took the bat to the kitchen to separate the flesh and innards from the skin and carved it for easier eating. The coconut soup, first of all, was delicious: rich and creamy with plenty of onions, parsley and other fresh spices for seasoning. Then the carved bat returned, with small red chili peppers where its eyes had been, I began to eat. While it has a very thin layer of fat between its skin and flesh, the meat tastes something like—you guessed it; chicken. It, however, is darker than chicken (more like the dark meat, and slightly more gamey. Although I generally enjoyed the meat, I was less impressed by the black liver. And to wash it all down, a Red Rooster (Palau’s national beer) black and tan (a combination of its light beer and stout).

Joyce, meanwhile, went with another form of traditional Palauan cuisine: Japanese. After being told that the restaurant was out of mangrove crab summer rolls with hibiscus, she defaulted to shrimp and vegetable tempura with a very non-traditional iced tea.

And after a day walking the hot and humid main street, we stopped for another quasi-Palauan treat, a coconut milk shake whose coconut milk, while having no ice cream, was loaded with tiny pieces of freshly crushed coconut. Not one of our favorite shakes.

Seafood Garden, the most disappointing of our Palau restaurant stops. We had a three-course meal beginning with land crab cooked in coconut cream (we preferred the same dish at Anthia Café), pan-fried land crab with garlic, onion and chives in a spicy soy-based sauce (much work for little meat and an uninspired sauce) and steamed mangrove clams with cellophane noodles and a soy-based dipping sauce (not our favorite clams). Since the wine list was so limited and uninspired, we had Asahi Dry beer.