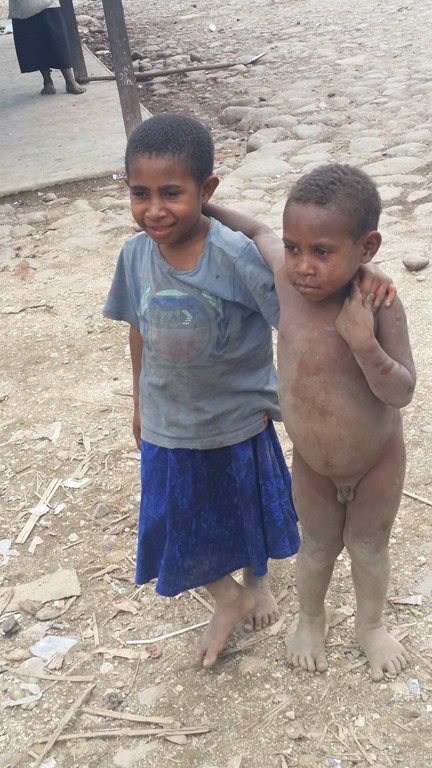 From Port Moresby, Papua New Guinea (PNG), we took a plane to Tari to visit the southern highlands. This area is characterized by a combination of tall (especially the 14,400-foot Mt. Giluwe) and mid-sized mountains, deep, broad valleys and rolling grasslands. Our destination was Ambua Lodge in the 7,000-foot Tari Gap on the on the upper ridge of the Tari Valley. One of the most remote regions of the PNG highlands, it was the last of the country that Westerners explored. The first formal expedition was not until 1934! Even then, most of the region remained unexplored and totally unpatrolled until the mid-1950s. The government had little formal presence in most of these areas until the late-1970s and 1980s. Westerners or Western goods, religion and medicine didn’t really begin to arrive until the early 20th century.

The Huli people who live in this area were slow to adapt to Western ways, and many resisted. The region, long the center of clan conflicts, was also slow to get into the spirit of cooperation. They still build tall mud walls to mark and to protect their lands. Some entrances are arranged in patterns, and occasionally with dead ends, to further deter trespassers. And since conflict remains frequent, men continue to carry machetes—just in case. 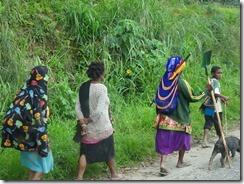 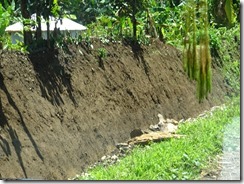 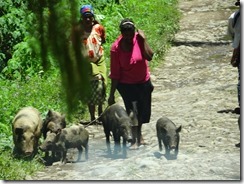 Our flight, after rescheduling and a delay (which seems to be the norm in PNG), finally arrived in Tari, the capital of the 360,000-person Huli province well into the afternoon. Imagine our surprise to find the area just outside the airport gates were jammed with locals anxious to get a glimpse of the new arrivals. No, it was not that we had a celebrity in our midst. It is that with no television or radio, watching the handful of daily plane arrivals and departures is a form of collective entertainment. And since the airport is just across the street from the town market, many people were already in the area.

The 45-minute drive to Ambua Lodge took us past the biggest construction project this area has seen since ExxonMobil built a natural gas pipeline through an hour away last decade. This new construction, the only steel-frame (in fact, the only non-wood, thatch or corrugated steel buildings, much less the only two-story buildings) in town are slated to house the provincial offices. We were temporarily lulled into a false sense of security by the town center’s paved road.

This, however, did not last long. Since the official in charge of building a paved road had been jailed for corruption, paving had stopped and we spent most of the trip on a deeply rutted mud road that was even more challenging as we arrived during the regular afternoon downpour. Although we passed only a couple of cars, there were a handful of homes. Every kilometer or so, we also ran into bus stops, each of which was marked by wood or corrugated steel food stand and occasionally, a couple of people. We also saw a number of other, more interesting structures: tiny, roughly 10 or 12 square foot, well-maintained houses built atop concrete foundations and in a style reminiscent of 1950-era Levittown houses. These we learned, were actually graves. The houses were the home of the souls of the deceased. 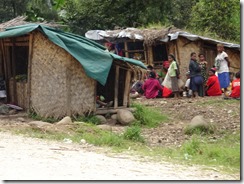 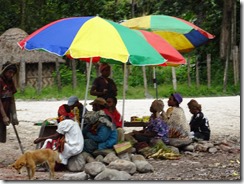 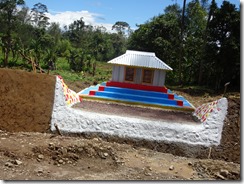 By the time we checked into our lodge and had a late lunch at the beautifully-sited (on the side of a hill, overlooking a valley), beautifully-landscaped lodge, we had time for a short and pretty, albeit very muddy, introduction to the foothills of the Southern Highlands. Our journey took us into a lovely jungle valley with a large, couple hundred foot tall waterfall.

Our second hike came the next morning at the ungodly hour of 6:15  AM. This was for a birding walk on which we were anticipating and were rewarded for the muddy trek by seeing six Birds of Paradise birds. But since all were at great distances, usually partially covered and seldom posed for long, we weren’t able to get any good pictures.

While we had the opportunity for a few additional birding walks, one was enough for us. We satisfied ourselves with the tales and pictures from other bird observers.

Another lovely, longer (roughly two hour) hike took us deep into a shaded, rainforest valley, following a river down though heavily mossed rocks and trees. We crossed three 25 year-old vine bridges (which were in amazingly good shape) and passed two lovely waterfalls. Alas, no birds or animals, but a lovely little hike. 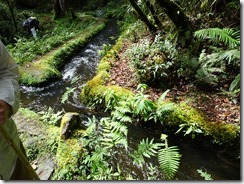 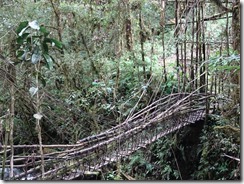 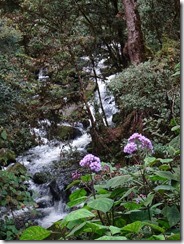 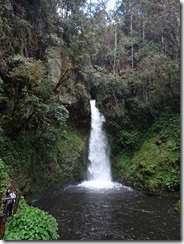 Then we had a guided tour through the incredible garden of one of the guides. While he had a very fair share of sweet potato, taro, banana, cabbage and other fruit and vegetable plants and trees, we were there for his collection of about 30 different species of orchids that were scattered throughout lovely ferns and other tropical plants. As if these weren’t enough of a treat, we then got up close and personal with his people-friendly, pet tree kangaroo. 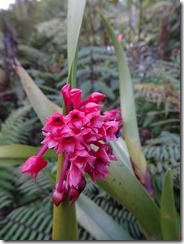 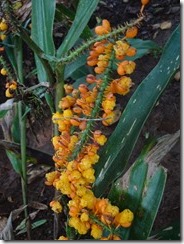 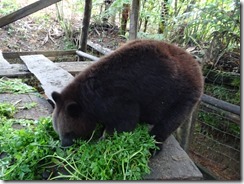 Drives through the Huli Countryside

The poverty here is pervasive. Poorly maintained dirt roads serviced only by occasional run-down buses, single-room woven bark, thatched-roof, or corrugated steel huts, mud walls (to denote and protect property) and food stands (one of the few ways of earning money) at and between every bus stop, many of which are crowded with socializing residents. These stands are a particularly interesting site during periodic afternoon rainstorms when the stands and many of the people are covered by large, bright, multi-colored umbrellas to protect from rain and sun. 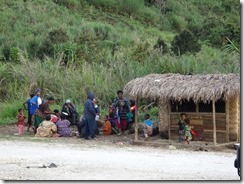 The villages themselves are characterized by agricultural fields, displays of handmade crafts and soot-filled, non-ventilated kitchens in which women, often with their children, cook meals and dry branches and Pandamus leaves for use in building huts and making bags. Although none of these huts have electricity (our lodge, by the way, is powered by hydropower from its own dams), we saw one hut with a small, roughly six-by-eight-inch solar panel which is used to charge flashlight and electric lanterns for use in evenings.

And everywhere, despite the poverty and the violence (none of which we saw or experienced), we ran into friendly, happy, smiling people (many with black, beetle nut-stained teeth) speaking with each other, openly greeting tourists and begging for us to take their pictures. almost everyone that we passed in our bus or on the road, smiled and waved at us. And all of this, much to the surprise of the type of experienced and adventurous tourists who visit PNG, with no thought of asking for money.