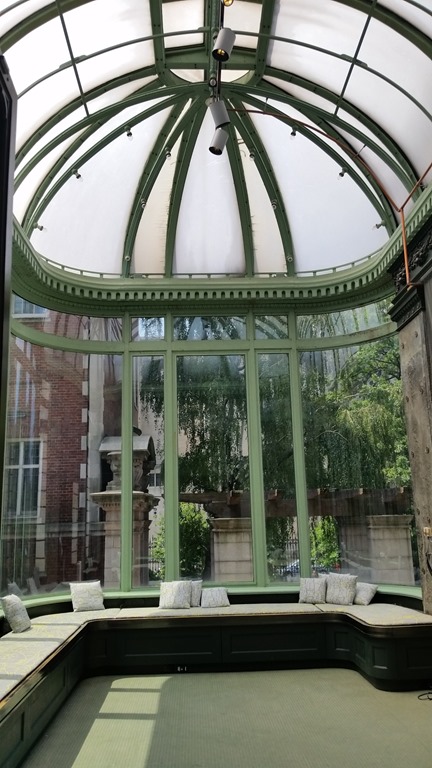 New York City’s Museum of Modern Art, or MOMA, has one of the–if not the most comprehensive–collections of modern art in the world (over 200,000). Its Post-Impressionists collection starts with Cezanne, the generally acknowledged father of modern art, and includes others such as Van Gogh, Bonnard, and Rousseau. It progresses through Cubism (Picasso, Braque, etc.), Futurist (Kandinsky, Chagall and so forth), Geometric Abstraction (Legar, Mondrian, Picasso), Surrealism (Miro, Magritte and again—Picasso), Abstract Expressionism (DeKooning, Pollock, Still, Rothko, etc.), Russian Avant-Garde (Rodchenko, Malevich) and Mexican Modernism (Rivera, Kahlo, Orozco). While Picasso crossed multiple genres and was represented in multiple galleries, a handful of pioneers got their own galleries. These were Matisse, de Chirico, Duchamp, Brancusi, and Monet (exclusively for his water lily series).

Unfinished Conversations. This exhibit contains work from about a dozen artists that are fairly new to the MOMA collection. These works are dedicated to three broad, interrelated themes: social protest, the effect of history on the formation of identity, and how art juxtaposes fact and fiction. Many at least as we are told) allude to acts of state surveillance, censorship, repression, and violence and the resistance and activism they provoke.

This retrospective focused largely on how Rauschenberg continually evolved his styles through a series of creative collaborations with friends from all different fields. It began in the artist’s college years in the late 1940s, where he went to a school (Black Mountain College) with professors who challenged students to create art from miscellaneous “found objects” and even trash—a practice in which Rauschenberg was to become a pioneer and leading practitioner. He continued this work after college, when friend Cy Twombly and he traveled in Italy and Morocco, picking up interesting pieces of found scrap and creating small assemblies, and then in New York, where he, Twombly, and two other friends (dancer/choreographer Merce Cunningham and composer John Cage) established a studio in which he also began experimenting with plain black and white palettes (sometimes incorporating scrap into the paintings.

By the late ’50s, he began incorporating ever-larger found objects into his works. These included one work that was designed around a stuffed eagle and another that incorporated a full-scale stuffed goat, which he inserted into a used tire. His painting, meanwhile, also began to incorporate, if not actually represent, more traditional “painterly” subjects, as when we created a series of 34 illustrations illustrating Dante’s Inferno, and his palette gravitated toward red, as in a series of dance sets and costumes around performances choreographed by friend Merce Cunningham.

By the mid-’60s, he had been creating more complex, large-scale constructions (again largely around found objects) and choreographing his own performances around them. He also learned the silk-screening process (at the workshop of a friend, Andy Warhol) and created a silk-screen library of hundreds of printed images that he mixed and matched into a series of large-scale canvases. His work with large-scale, found-object assemblies also began to evolve—then in collaboration with a couple of Bell Laboratory engineers with whom he began creating audio and kinetic pieces enabled by leading-edge electronics. Examples included a few room-sized installations, such as “Oracle” (which used AM radio and wireless transistor circuity to create a series of metal musical contraptions) and “Mud Muse” which used electronics to choreograph mud bubbles around music in a large tub of mud. He, in fact, became so interested in integrating technology and art that he began working with new technologies including closed-circuit TVs and sonar, and established an exchange by which artists and technologists could share ideas and create their own collaborations.

By the 1960s, the artist created a studio complex on Florida’s Captiva Island, which gave him the opportunity to work on larger-scale projects and to escape the hectic pace of his New York life to be able to reflect and to move in new directions. He spend time in India, working with textile designers, and created a series of works of multi-colored silk pieces that fluttered in the wind and began working with Macintosh computers to create and incorporate digital images into his work. He also returned to dance collaborations, this time with choreographer Trisha Brown, with whom he created a combination of photographic slides to be projected on the back of stage sets to create an ever-changing backdrop to the performances.

This exhibition, compiled primarily from Wright’s own archives, provides a perspective on many dimensions of an architectural practice that consist of designs of more than 1,000 buildings, including more than 500 that were actually realized. Not only was Wright one of the most prolific architects of all time, he was also the most influential—and one of the most shameless self-promoters. We have been a fan for the last 40 years, touring dozens of his buildings across the country and touring both of his schools and his residence/studio. This exhibition, which is divided into 12 sections, provided yet another view of the master’s work.

Rather than track the full arc of his career, it begins with an overview of some of his most important buildings (such as Fallingwater, Robie House, Johnson Wax Building, Unity Temple, and others) and then provides more detailed overviews of designs for key buildings (including Imperial Hotel and the Mile High Building), categories (like Urban designs and NYC buildings) and design concepts (such as the changing geometric patterns of his designs, his use of ornamentation and his pioneering use of building systems to create more affordable, modular construction. For example:

This exhibit focuses on the difficult road and sometimes provides an overview of stunning results of women artists who struggled to develop their own voices and command attention and respect in an era (roughly from 1945 to 1968) where they had few role models or mentors, and in which men dominated the art world, and especially that of abstract art. The exhibit portrays more than 100 works of all media (paintings, sculptures, photographs, drawings, prints, textiles, ceramics, and so forth) and all types of abstraction, by more than 50 artists. These works, which are presented generally in chronological order, highlight work by artists including Helen Frankenthaler, Joan Mitchell, Lee Krasner, Louise Nevelson, and Eva Hess.

Atlas was an innovative documentary filmmaker and videographer who became preoccupied with using six numbers (1-6) to illustrate a continually expanding and contracting universe via intricately choreographed video installations that highlight the importance and ubiquity of mathematical algorithms in our increasingly technologized society.

An avowed feminist with a habit of incorporating subtle political and anti-war messages into her work, this exhibit provides a combination of her photographs, murals, and other types of media in which she reformats some of her existing content to other media. This includes black and white line tracings of her photos and the incorporation of photographic images into paperweights.

The exhibit was divided into several stages during which the artist, who had no training in sculpture, broke the rules to create a new genre of sculpture while simultaneously extracting insights that would be fed back into his painting and judging from some of the humor in the pieces, having a lot of fun at the same time. This exhibit had numerous examples of all Cindy Sherman’s major photographic series: fashion, centerfold, grotesques, sex, history, clowns, headshots, society portraits, and collages. It explained how she did all this work herself, without even an assistant, and most importantly, showed the emotional power of her work–her ability to parody and caricature society and conditions, while simultaneously conveying emotions ranging from sympathy to pity to disgust.