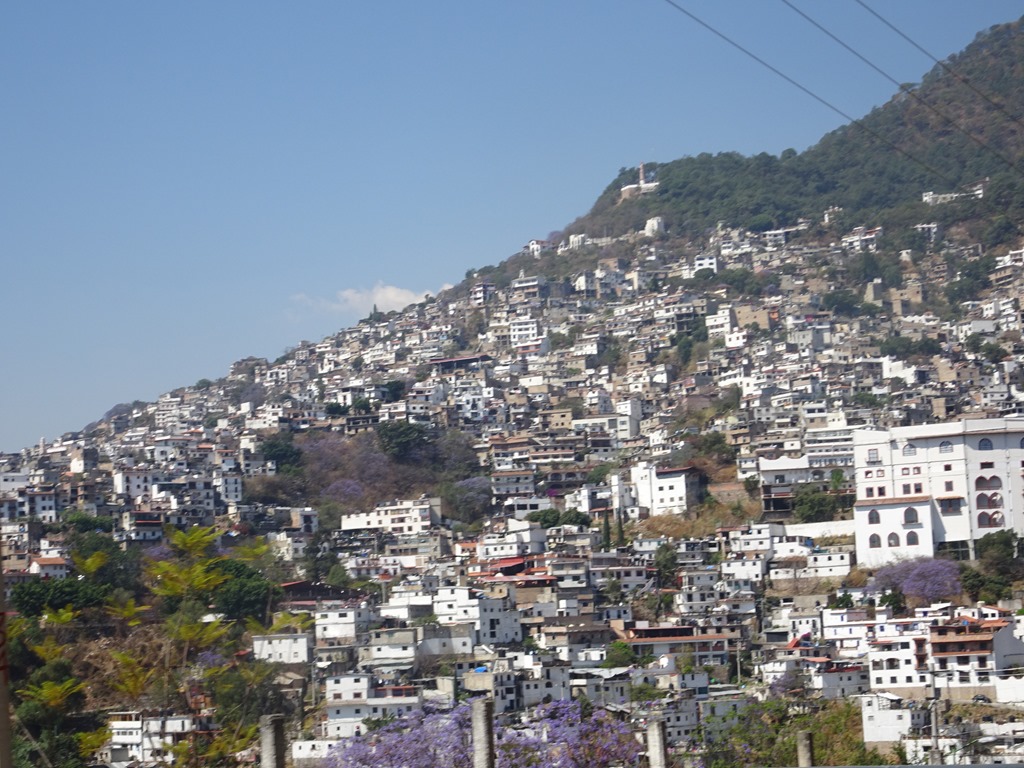 Taxco is a colonial city, cut into the side of the rugged Atatzin Mountain. It shouts its dramatic setting and its charming atmosphere of whitewashed buildings with reddish-orange Spanish tile roofs from well before you even enter the town. It gets more dramatic and charming the further you progress up the hill into the town center. 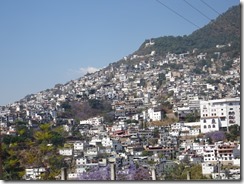 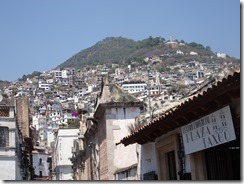 Taxco has so far enjoyed three lives, all based on silver:

It is now on the cusp of establishing itself as one of the world’s premier mountain biking centers.

While we are happy to just stroll the historic, colorful streets, browse the silver shops and take in the mountain scenery, the city also has one world-class sight and a number of noteworthy ones.

The world-class site is the Santa Prisca Church. The church is an 18th-century masterpiece with an incredibly ornate carved stone façade that stretches all the way to its clock tower and two bell towers. While we were awed from our very first view, we became increasingly impressed the more we saw—culminating in a lunch from a balcony across the square in which we found ourselves examining every detail. And as if the façade weren’t enough, the altar area is covered by a large ceramic dome. And speaking of the altar, the altar and the entire interior of the church is just as dramatic as the façade. All elaborate, high-relief, hand-carved wood gilded in 24-karat gold—not just the altar, but a lovely chapel, and side all panels as well. A large parish room in the back of the church is just as dramatic, with floor-to-ceiling murals, hand-carved desk and cabinets, and carved, gilded décor. Overall, this relatively small church, paid for by silver magnate and city patron Jose de la Borda), is one of the most impressive we have ever seem—more so even than a number of huge European cathedrals. 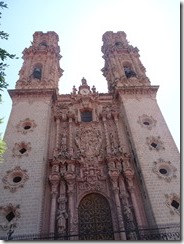 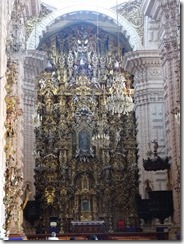 Some of the city’s other interesting sites include: 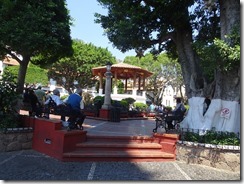 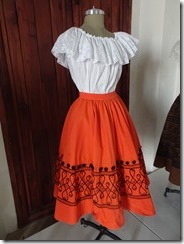 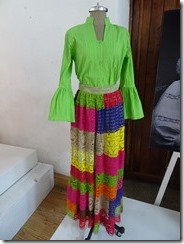 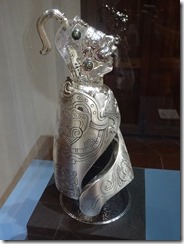 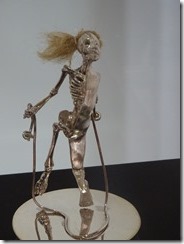 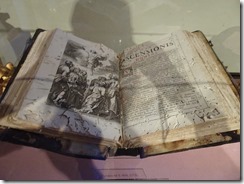 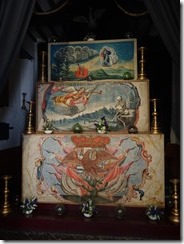 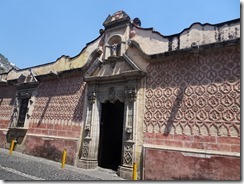 Flor de la Vida. This roof-top balcony restaurant at which we had lunch overlooking Plaza Borda (which was being prepared for a festival), the Santa Prisca Church and Dome and the charming Taxco cityscape, offered a range of Mexican dishes. We had two appetizers: a very good melted cheese with Chistorra (fast-cured pork sausage) on tortillas and Mexican octopus cocktail with avocado, onions and avocado in a spicy tomato-based sauce (which was actually more if a soup, than a sauce). We followed this with chicken fajitas with guacamole and refried beans—and a couple of traditional margaritas. We also received incredible assistance from our server, who provided tremendous help in arranging out return trip to Cuernavaca.

Our Taxco trip also provided a vivid demonstration of the level of security that has become increasingly common in this country. Although we have seen large numbers of police and military patrols through this entire trip, we saw and experienced more in this single day trip than in the other five days combined.

This began on our Uber ride from Cuernavaca to Taxco, where we saw a few roadblocks and spot checks and were stopped in one, where the officer checked the documents and asked a number of questions of our driver (and tried unsuccessfully to question us as we didn’t speak Spanish and he didn’t speak English) and then searched the trunk before letting us go.

When we arrived in Taxco, we saw heavily armed (machine guns and pistols) military police, usually in groups of two or three, everywhere we went, including on residential streets. Then, when we boarded a bus back to Curenavaca, the police not only searched bags, they also frisked us.

We never felt, nor anyone did anyone else appear to feel intimidated by this level of security. It just appeared to be a normal, everyday occurrence. It is, presumably, most heavily concentrated in states (such Guerrero, in which Taxco is located) in which higher levels of violence (especially west, toward and in Acapulco) have been experienced.

It is, however, a poignant reminder of how much tighter and more visible physical security is in some countries than it is in the U.S.