Chapultepec is a huge park that that is situated between Polanco and Condesa in Mexico City. It is twice the size of New York’s Central Park, much of it is open land. One section, called Bosque de Chapultepec, however, contains the vast majority of the park’s attractions and attracts huge numbers of people—especially on weekends and holidays. Among the dozens of attractions are: 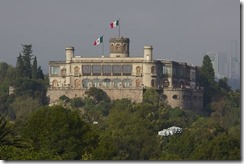 The highlight of the park’s museums and one in which we spent about five hours was the National Museum of Anthropology. The museum is huge, comprehensive, well-organized, informative and contains some of the most outstanding artifacts of Mexico’s history. The museum’s attractions begin outside the galleries with an ornate pillar that showers water down on visitors who choose to take or have their pictures under it. The pillar, however, is more than a spot for selfies. This single pillar also supports a huge (275-foot) courtyard canopy (purported to be the largest concrete structure in the world supported by a single pillar. 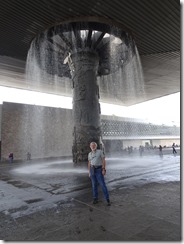 The museum is divided into two floors, the first of which is primarily dedicated to 11 Anthropology galleries that trace the history of Mesoamerica (with a particular focus on Mexico’s central plateau in which the city is located) from roughly 20,000 BC (when the first homo sapiens crossed the Aleutian land bridge from Asia to Alaska and began moving south to warmer climes) through 1521 (when Cortez conquered current-day Mexico and established it as a Spanish colony. The second floor contains eleven additional galleries focusing on the Ethnology of 11 culturally distinct regions of the country, examining the evolution of each of their cultures, economies, religious practices, social organizations, governing structures and educational practices. We focused our explorations overwhelmingly on the first floor, with an admittedly cursory overview of the second.

The Anthropology galleries begin with an overview of human migration to Mesoamerica and the initial movement into the central highlands (roughly 30,000-20,000 BC). It examined the growing diversification of these groups and the initial development of tools, and how the gradually warming climate (about 9000 BC) of the Holocene period prompted groups to begin to manipulate nature by selective planting, crop management and the creation of permanent settlements and eventually, actual cities. It took us through the growth of self-sufficient economies and the development of formal communities and cultures (from about 2300 BC to 100 AD) and how this led to the creation of social organizations and hierarchies, the development of ceramics and resultant creation of mixed economies and formal trade patterns. It examined the emergence of shamanism and how this led to the emergence of ceremonies, rituals and the creation of ceremonial centers, which in turn led to formalized religions, the development of formal architectural and construction practices (to build larger structures) and increasingly complex and ritualist ceramic designs.

Teotihuacan became the most important of these central highland ceremonial centers and increasingly a trading crossroads, economic center and political capital (from about 100 to 700 AD). It was developed in accordance with a formal architectural plan and included the creation of massive temples (Temple of the Sun and Temple of the Moon) and intricately designed religious sculptures (such as that of Chalchiuticue, the water goddess) and temples (especially the massive, intricate Pyramid of the Feathered Serpent (Quetzalcoatl, who was deemed to have created the universe and man). It also became the largest of the era’s population centers, housing more than 2,000 apartment compounds alone.

Teotihuacan eventually collapsed (probably due primarily to internal conflict). It splintered into a number of different power centers (such as Teotihuacan, Cantona and Cacaxla and eventually to the hegemony of the militaristic Toltecs (which lasted from about 700-1200 AD). They legitimized their power through religion (especially the worship of Quetzalcoatl) and secured it through the creation of trade networks.

The Toltec Empire also fell and led to the Mexica (i.e., Aztec) Empire (1200-1521 AD) that thrived on a combination of agriculture, trade, conquest and a hierarchical, strictly stratified culture of slaves, peasants, craftsman, nobility and priests—a culture that demanded tribute to one’s social superiors. The Aztecs:

All of this came to an end after the 1519 arrival of Cortez on the Caribbean coast. After easily dispatching initial resistance, he began his march inland. Montezuma, however, mistook the white-skinned, iron-clad soldiers, on their powerful steeds (they had never before seen horses) and with their deadly weapons as gods. While he sought to buy them off with gifts, Cortez used the time to build alliances with Montezuma’s opponents. Meanwhile, Montezuma invited Cortez into the capital of Tenochtitlan where Cortez imprisoned and eventually executed Montezuma.

This led to the colonial era, which is examined in a separate exhibition in the museum’s entry hall.

This leads to the Ethnography exhibits which examine the evolution of the histories, cultures, family lives, social organizations, governing structures, economies, religious practices, dress, artistic expression educational practices of 15 other Mezoamerican civilizations in other parts of what was to become Mexico and the southwestern United States. Among the more prominent examples are:

Overall, a fascinating museum in which we could have easily spent much more than the five hours that we we did spend. 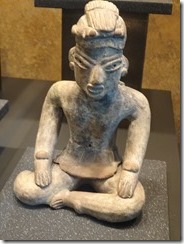 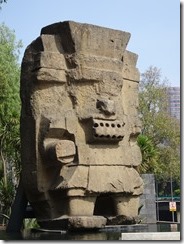 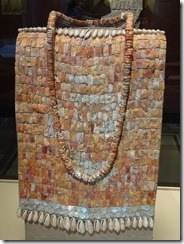 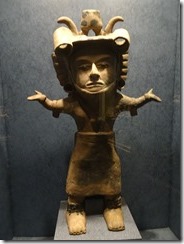 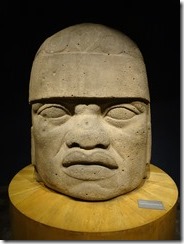 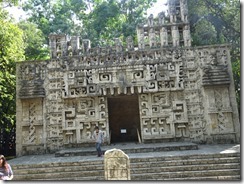 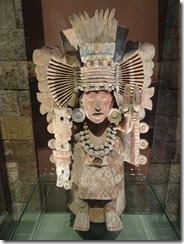 The Modern Art Museum is more modest and does not attempt to provide a comprehensive overview of Mexico’s modern art movements (both of native Mexican Artists and non-Mexicans who spend considerable periods in the country). Even so, it has some lovely and interesting works including works of all the country’s modern masters (Siqueiros, Tamayo, Kahlo, and especially Diego Rivera). We particularly enjoyed Geraldo Murellos’s portrayals of  ruggedness and colors of nature (especially his portrayals of volcanoes) and of the multi-artist review of family vigils.

There were also a number of temporary exhibits including: 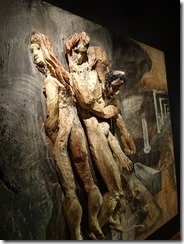 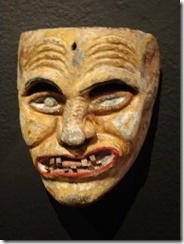 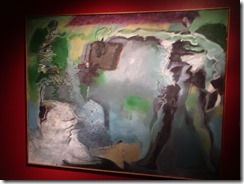 The museum also has an impressive sculpture garden, consisting again, of works by both Mexican and visiting artists.