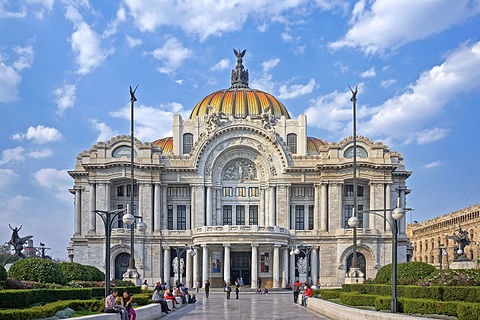 Alameda Central is section of the central part of Mexico City that begins a couple blocks from the Zocala. It is named after the poplar trees that populate Alameda Central Park. The area which was created in the 18th century, contains a number of notable structures

The Palace is the highlight of this neighborhood. Completed in 1934, it has an Art Nouveau marble exterior with pre-Columbian decoration, a dramatic dome and a geometric, Art Deco interior. Its interior wall are graced by several dramatic murals by artists including David Alfaro Siqueiros, Rufino Tamayo, Jose Orozco and of course, Diego Rivera whose “Man, the Controller of the Universe”, recreates a number of the pro-Communist, anti-Capitalist themes that David Rockefeller demanded be removed from the famous mural that Rivera created for Rockefeller Center. One of the palace’s most famous elements, however, is a dramatic, colorful, glass mosaic stage curtain created by Tiffany Studios that contains more than 1 million glass tiles.

The building also contains a number of galleries that, when we visited, had art exhibits based on themes including the Mexican Revolution, industrialization, the emergence of Mexican Modernist art and the emergence of Nazism. There were, as in most of the exhibits we saw in this city, extensive representation of Diego Rivera, including an oil in which he explored cubist concepts. 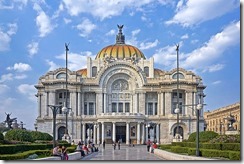 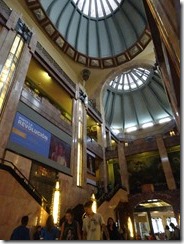 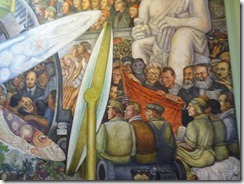 The Postal Palace is an incredible wrought iron and marble structure decorated with Murano crystal that was built in 1907 to symbolize Mexico’s emergence as a major country. In addition to the building itself, it displays models of dozens of the city’s primary buildings that are constructed of matches and a large mural created with 3,400 postage stamps. 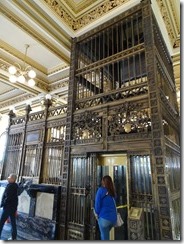 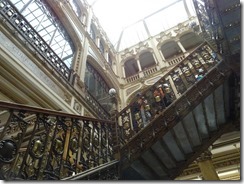 This was a 16th century palace of the Counts of Orizaba. A 1737 refurbishment saw the exterior covered in Puebla blue and white tiles and the elaborate paneled interior (which was not open when we were there) decorated with tiles, murals and gold-framed mirrors.

Its carved exterior only suggests at what is purported to be so lavish as to have competed with Casa de los Azulejos as the colony’s most incredible residence.

The district also has a number of more contemporary buildings, the most notable of which is:

Constructed in 1956, it was Mexico’s tallest building, topping out at 44 floors (600 feet). While many were skeptical that such a tower could survive an earthquake on this ground, its 52-meter pilings have allowed it to withstand several quakes that have damaged surrounding buildings. Unusual for such a skyscraper, its windows not only open, but swivel 360 degrees, allowing them to be cleaned from the inside. 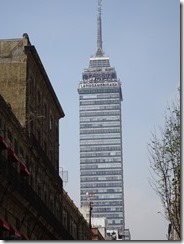 And then there’s the columned Hemiciclo a Juarez monument that fronts Alameda Central park on Avenida Juarez and serves as a meeting place for people in the park.