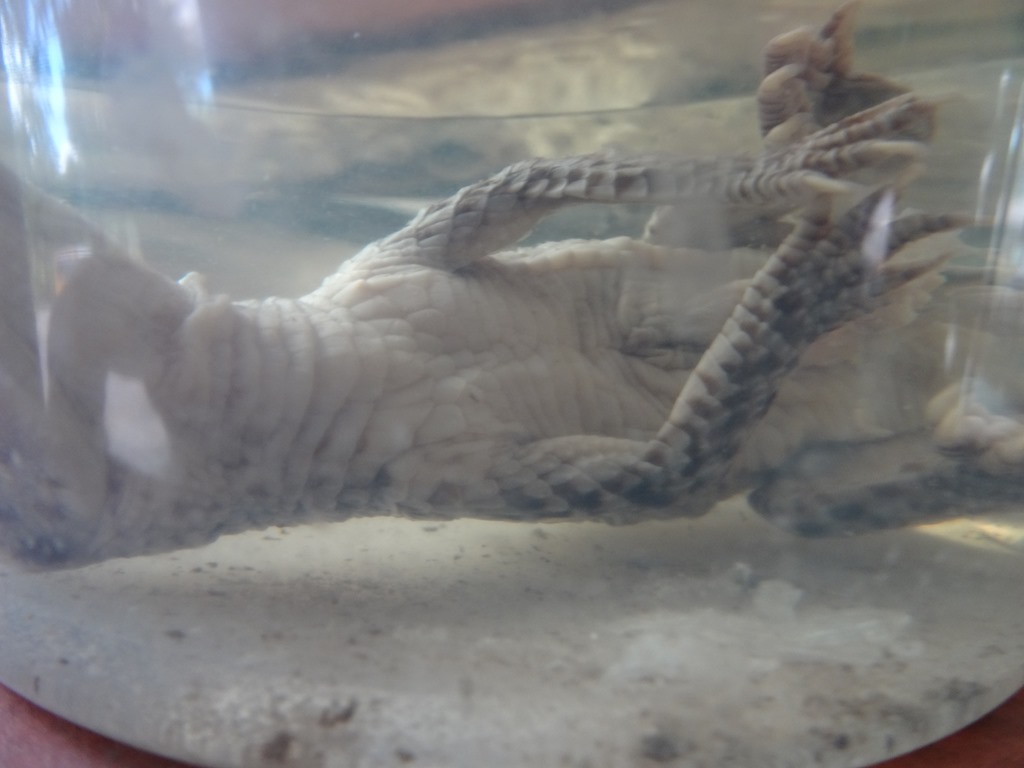 Cuba is a small island. Yet it has many interesting places. We left the Vinales Valley heading southeast toward Cienfuegos. After passing south of Havana we reached the Zapata Peninsula, named for the landowner to whom Spain granted the property in 1639. Largely swampland, the area is only sparsely populated. It is, however, one of the country’s primary wildlife refuges. We made one stop on the peninsula

This facility, home to about 4,000 crocodiles at a time, has a primary mission of breeding crocs for return to the wild. It breeds adult Cuban crocodiles (which are a few feet smaller than American crocs when full grown), incubates the eggs and grows the animals until they are five years of age—the beginning of a crocodile’s breeding cycle. At this time, they release about 200 into the wild. (A few others are sold to restaurants as a specialty item—a practice that helps defray the cost of operating the center.)

The center has preserved a few eggs, fetuses and young babies to allow visitors to see the entire life cycle. It also has live crocs in outside pens that are segmented by age—such as birth to six months, six to 18 months, 18 to 36 months and so forth, up to those of the largest adults. These adults, which begin to breed at between five and seven years, can grow to over ten feet in length and can live as long as 70-100 years. 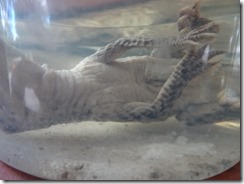 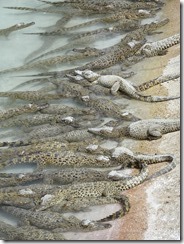 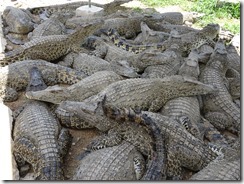 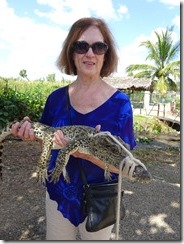 When the female gives birth, keepers enter the pens at night to remove the eggs to artificial nests where they are protected both from hungry adults and from nature. Crocs, like alligators, can become either male or female, depending on the temperature of the nest. Generally, temperatures below 34 degrees C produces females and those above that produce males. Once they are born, however, the only way to determine a croc’s sex before breeding age is through an internal exam (think a rectal exam).

From there we traveled along or near the southern cost, past many swimming beaches and, slightly offshore to coral reefs and a number of popular dive sites.

Santa Clara Cuba was founded in 1689. Its main square, Leoncio Vidal Park, is very pretty, with a band shell in the center and surrounded by the art museum, municipal palace, theater and other pretty buildings. 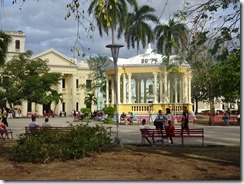 The primary reason we visited to the city, however, was for its critical role in being the site of the last battle of the Communist revolution. While Fidel Castro led the fighting on the East, Che Guevara was the mastermind of the fighting in the center of the country. He, therefore, is the local hero, commemorated by two key monuments:

Che Guevara Monument and Museum is topped by a monument to the local hero and, underground, his mausoleum (with plaques to him and his colleagues, an eternal flame and a garden) and a museum that traces the history of his life. This begins with his birth, his medical training, travel through South American were he committed to addressing the inequality and suffering that he saw, his meeting with Fidel in Mexico, his leadership of the Central Cuba and subsequent role in the Cuban government (primarily in economic and diplomatic posts) and his subsequent move to and fight and eventual execution in Bolivia. It portrays his life through photos, copies of letter and a number of artifacts from different stages of his life—from his medical lab coat, through his guns and his field telephone and radio. 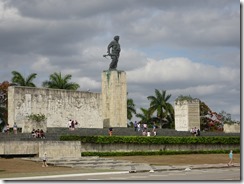 Blindado Train Monument, which commemorates Che’s and 100 of his guerrillas’ capturing of the city against 3,000 0f Batista’s troops and his execution of the final campaign of the war where, on December 28, 1958, he used a tractor to destroy the track and derail a train that carried 408 Batista soldiers and weapons that were intended to reinforce the last of Batista’s embattled troops in the east. Once the train was derailed, he used Molatov cocktails to force soldiers from the train and, instead of killing them, offered them the opportunity to renounce Batista and join the guerillas in their triumphal march into Havana. 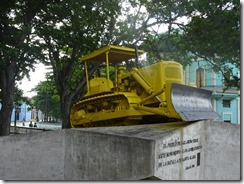 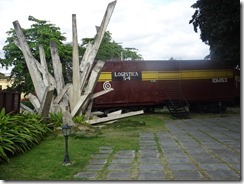 Remedios is town with a pretty, nicely preserved central square (Plaza Marti) that is surrounded by two churches, two hotels and a number of smaller, one-story buildings. The Neo-Classical San Juan Bautista Church is the largest building in and the highlight of the square, notable particularly for its recently renovated Baroque interior, its beautiful gold altar and chapels. 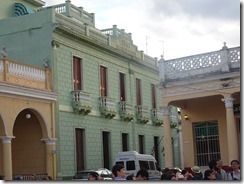 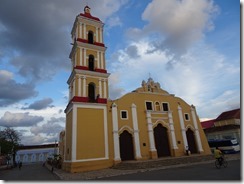 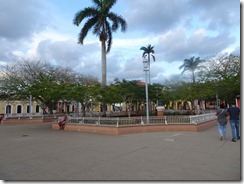 We had one meal in Remedios and ate at Encanto Barcelona. We added an appetizer of nice, lightly fried shrimp to what seemed to become our regular dinner order of grilled lobster tail (with butter and parsley sauce) with salad and rice. Although the lobster was smaller than those we had recently, they were relatively tasty. We were happy to find an unoaked chardonnay (Santa Digna 2015, from Chile).

Our hotel was Encanto Barcelona, which is nicely located right in the main plaza. It had a beautiful lobby and common areas (surprisingly, the toilet in the lobby did not have a toilet seat…which was unexpected based on how nicely done the lobby was). Our room had a small entrance room that was overstuffed with boxy furniture and a tv. The actual bedroom had a huge chair in it even though it took up much too much space. The room itself seemed a little date but that was due to old boxy furniture. Also, while the bathroom was recently renovated (great rain shower), the old bathroom entrance door wasn’t updated, which contributed to the dated-room look.  While the bedspreads and curtains were new, they were still in an old style. The windows did not block the street noise, but it wasn’t a huge issue for us. Breakfast was decent and included the standard Cuban hotel breakfast items (you could order an omelet too). They even had doughnuts which is not normal. Bottom line, good location and comfortable room.