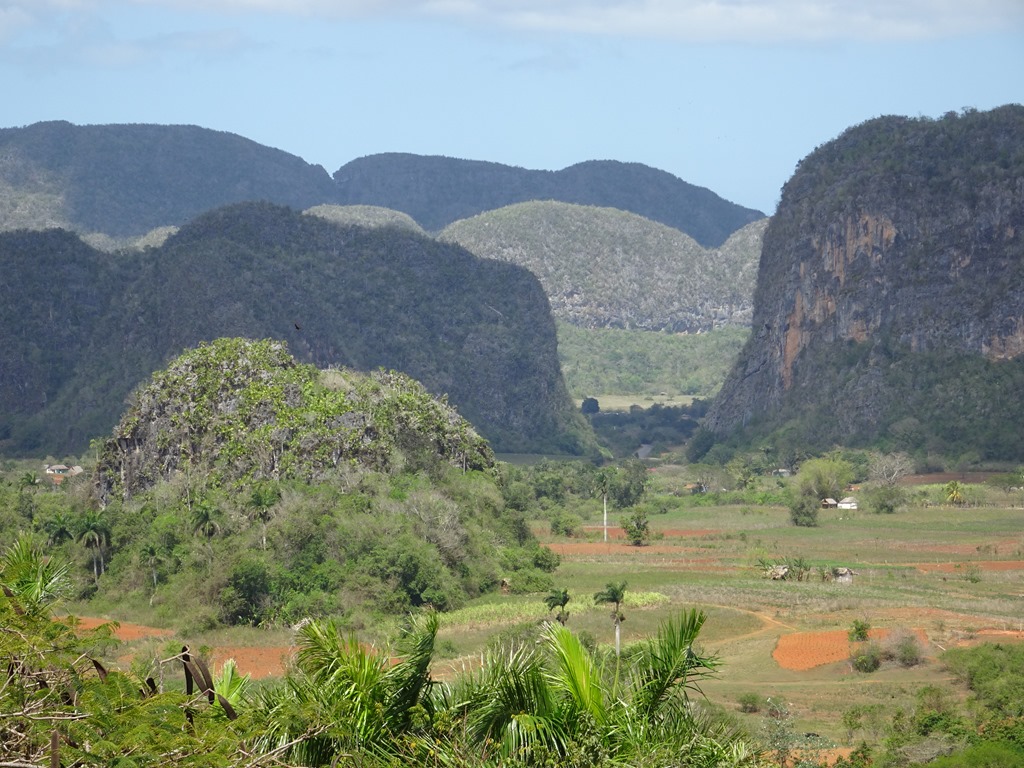 West of Havana is the Vinales Valley. This area is doubly blessed:

After a roughly 1.5 hour drive from Havana, we reached the peak of the road overlooking Pinar del Rios, a ridge lined with a combination of pine and tropical trees and great views of the valley and the karst “mogotes” below. Although our guide offered us the opportunity for a horse ride through mountain passes and farms, Joyce’s back problems prevented us from taking advantage of the opportunity. 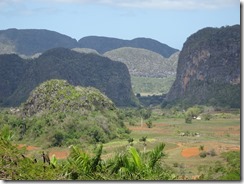 Sights of the Vinales Valley

Among the valley’s many interesting sites are the: 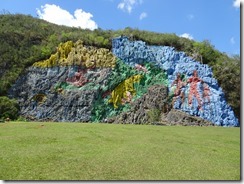 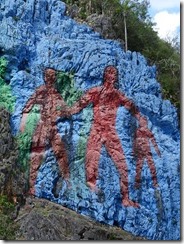 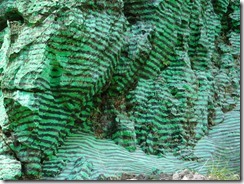 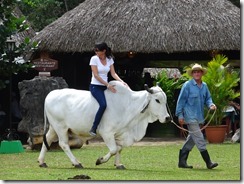 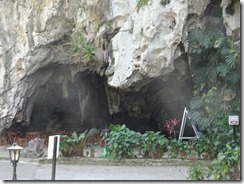 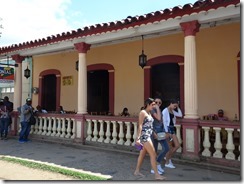 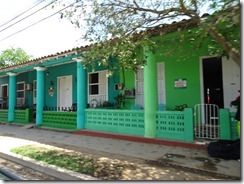 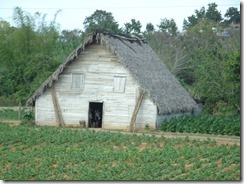 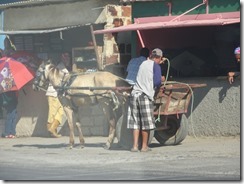 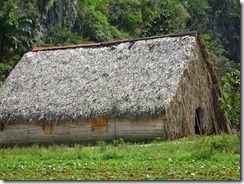 Speaking of tobacco curing houses, we insisted on a return visit to a tobacco farm, with its rows of tobacco plants, a curing house filled with bunches of aromatic leaves hanging from nine levels of drying racks that stretch from floor to ceiling and a farmer that is more than willing to explain the entire growing process while simultaneously demonstrating the rolling of cured leaves into cigars. Among the primary steps are:

After this, the farmer sells the tobacco, selected, grown and cured to the specifications of the buyer, to a state-owned cigar company (such as Partagas) who rolls, brands the cigars. The famer pays the government 80 percent of the proceeds and keeps the remainder, which is used both to support his family and reinvest in his farm. The farmer also retains some of the leaves for his own use—primarily to roll into cigars which he can sell himself. The farmer we visited, kept some of the tobacco that he sells to Partagas (which uses the first, strongest aroma leaf from a plant) and to Montecristo (for Montecristo #4) to sell to visitors at roughly two-thirds the cost charged by the factory store.

Tom bought the same unmarked bundle of ten Montecristo #4s–which were one-third-the price of his Cohibas (of which he had already bought six at the factory)—for 30 CUCs (roughly $30). A bargain, perhaps. But when he bought the same bundle, from the same farmer five years ago, he charged 10 CUCs. Inflation. 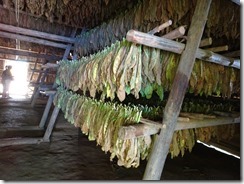 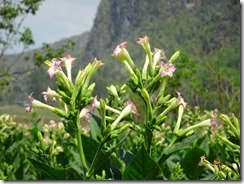 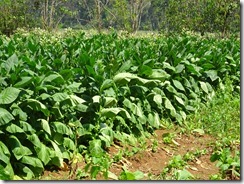 The Natural Beauty of Soroa

After an amazing lunch (see below), we drove about half way back toward Havana to the town of Soroa. There, we took a leisurely walk through a nicely landscaped botanical garden (Orguideirio Soroa) that had a huge variety of ferns, many types of beautiful flowers (whose Latin and Spanish names we could not interpret), and even a few cacti. The highlight, however, was the wonderful orchid house with its roughly two dozen species of incredible flowers. 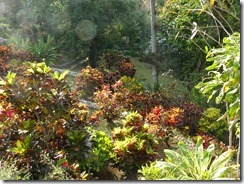 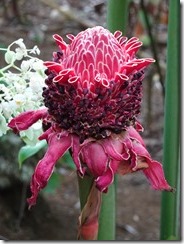 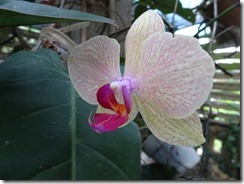 Then we took a leisurely walk down to (not to speak of back up from) a waterfall, Cascada Soroa. The steep steps took us through a forest and is rich in birdlife and ends at a pool (very popular for summer swimming) at the base of a roughly 100-foot waterfall. These falls, as shown by the photo at the entrance, are a raging torrent by the end of the rainy season. We, however, were there in the dry season. Our reward was more of a trickle than a torrent. It was, however, still pretty and well worth the walk. 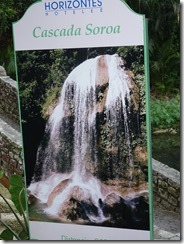 Now, back to lunch. We had lunch at this ecologically-friendly farm that grows relatively small quantities of dozens of different fruits, vegetables and herbs. Their primary mission is to educate the public about sustainable agriculture and different types of ingredients that can be used in preparing food. 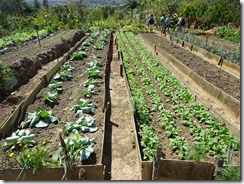 It also has a restaurant that serves meals based on their own produce and organically and sustainably grown fish and meat.

After a 45-minute guided tour of the farm, we sat down for lunch. And what a lunch it was!

We began with a homemade welcome drink consisting of pineapple juice, coconut milk, basil, lemongrass and other herbs, that were blended with ice into a creamy, foamy liquid, and topped with several sprinkles of cinnamon what we mixed into the drink to our own taste.

Then came the food. Rather than order from a menu, you pay a fixed price and get everything they prepare. And I mean EVERYTHING. When we sat down, we first got a huge bowl of vegetable soup. Soup that was so delicious that we would have been happy to make it a full meal. There was, however, no chance of that. Before we even finished the soup, every inch of the table, plus an overflow space on an unoccupied bench behind us, with filled with more than a dozen plates that were absolutely filled with virtually every type of vegetable that you can imagine, not to speak of one large piece of chicken for each of us and full plates of pork and sautés of fish and beef. 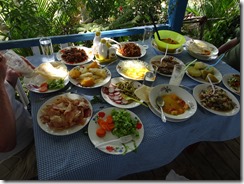 Vegetables included, but were in no means limited to organic lettuce, tomato, onions pepper, radish, cucumber, squash, sweet potato, yucca, and a little bit of fruit (pineapple, mango, etc.) for good luck. Some were served raw, others steamed, baked or fried. Yucca flakes were baked into thin wafers and sweet potato slices fried into delicious (with no need for salt) chips. Black beans, of course, were served with rice.

So much food that the restaurant offers a deal—if you eat everything that is served, the meal is free. The three of us couldn’t even qualify for this competition. After eating much more than our fill of this incredible meal, most of the plates appeared not to even have been touched. No way that we were going to get our money back. But no big loss. All of this food—not to speak of all the water you want and a bottomless bottle of white rum left on every table costs a grand total of 10 CUC (about $10) per person. But even after we called “uncle”, the service was not yet finished. They finished us off (both literally and figuratively) with a generous slice of flan that was so good that we all finished it. Then, we struggled to rise from the table and waddle back to our car.

Not just a farm and a restaurant; Finca Agroecologia is also an experience.

We finally made our way to our hotel: Castle in the Clouds. This medieval castle-like mansion was originally built by a large land owner. Set atop a mountain, it offers incredible views of the countryside and other mountain ranges. Although the property had fallen into disrepair since the revolution, it has just been renovated into a luxury boutique (six rooms) hotel at which we stayed and had dinner. Dinner consisted of salad and lobster sautéed with vegetables. The hotel—not to speak of the view—is lovely. But it still has some quirks to work out. The shower did not drain properly, the room cleaner left the hand held shower so that it faced out. That meant that when we turned on the water, it went all over the bathroom. The bedroom was somewhat small but we had a second room filled with a TV, refrigerator and luggage rack. Also had a couple of uncomfortable chairs.Not sure who would ever use the room. Some outside steps lacked lights so naturally Joyce tripped and fell in the darkness.

The staff, which were extraordinarily diligent and helpful, were also still in the process of gaining their sea legs as the hotel is fairly new. We, however, have no question that they will find their way and produce the type of experience expected of this quality property.

In spite of the “learning curve”, this is a beautiful and restful place to stay.