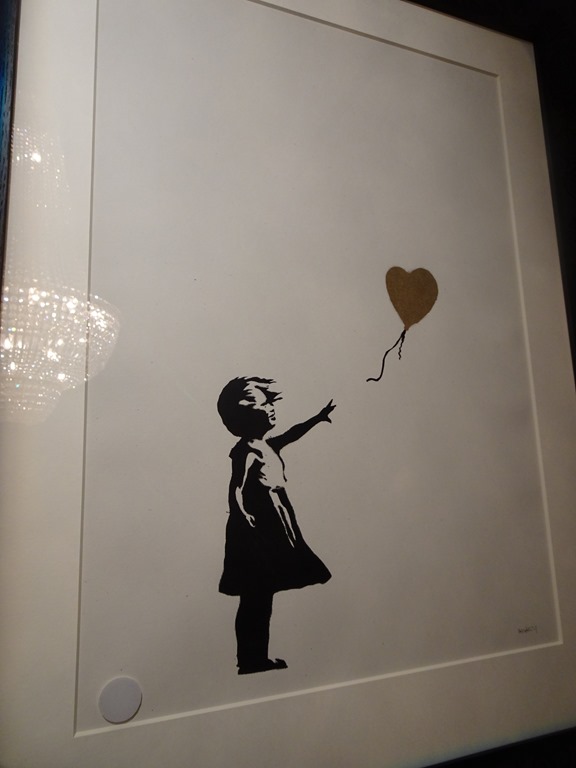 Melbourne is loaded with art. The city has many galleries and local art fairs (such as the below-discussed Rose Street Art Fair and St. Kilda Esplanade Market). It also has a large collection of museums in the city’s Cultural Precinct, each of which hosts different exhibitions. Although we would have loved to visit a number of them we were especially intrigued by two: a National Gallery of Victoria (NGV) exhibition of the works of David Hockney; and a less formal exhibition of more than 100 works by the street artist, Banksy.

The Art of Banksy

This exhibit contains more than 100 pieces produced by “Banksy” that was compiled and presented by the international street artist phenomenon’s former agent. It begins with the question whether the mysterious hooded figure who began as a prankster creating illegal graffiti in 1990s Bristol England, and has since evolved into a still mysterious international artistic icon is indeed a vandal and criminal, or an artistic genius for the new era. He has almost single-handedly transformed “street art” from being a crime for which people are prosecuted, into a recognized art form that is commissioned by property owners, encouraged (in some cases and areas, such as Melbourne’s Hozier Lane) by cities and bought for enormous prices by collectors.

Although the exhibit certainly didn’t answer the question, it portrayed the evolution of his work from freeform to stencils to his controversial decoration of cows and elephants; and the difference between his street art (which is created with the intention of being temporary) and inside art (which is intended to be permanent and displayed in homes, offices or museums). It provided examples of all types of work, from those such as ”Girl with Balloon”, “Kids on Guns” and “Flower Thrower” to less known images of a tank and a platoon of storm troopers wearing happy faces, to “Trolley Hunters” in which a band of prehistoric hunters are shown stalking a couple of shopping carts. From an image of the Wizard of Oz’s Dorothy’s basket being searched by security police, to a stature that resembles Michelangelo’s “David” as a suicide bomber. Most apply some form of irony to a deadly serious issue. All deliver an underlying political or social message. 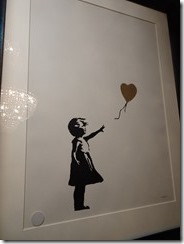 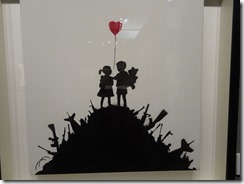 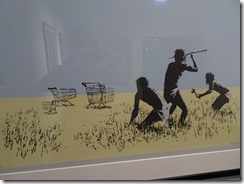 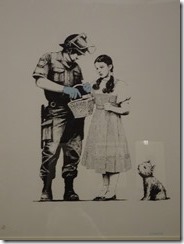 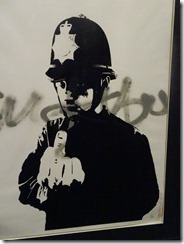 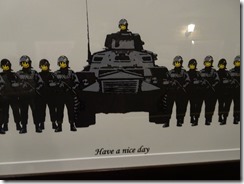 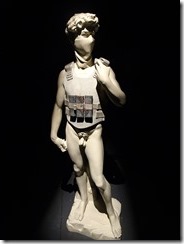 This exhibit is a large, 1,000+-piece survey of Hockney’s works. The 79-year-old master, who is England’s most renowned current artist, has gone though many iterations over his long career. Although we were most familiar with his Southern California poolside paintings, his work has been totally redefined by computers over the last couple of decades. Since we arrived just in time for a tour of the exhibit, we joined in and were rewarded with an excellent introduction to Hockney and his recent work.

The exhibit begins by showing how the artist initially began using experimenting with, and gradually perfecting the use of iPhones and iPads as substitutes for the sketch pad he always used to carry with him and how he used the replay feature of his application to watch and better understand the process by which he actually sketched images—and by showing a comparison between displaying the resulting image on paper and a display screen, the improved vibrancy and luminescence of the image. This, as we saw through the exhibition, led him to create more and more of his finished work explicitly for displays on computer displays. 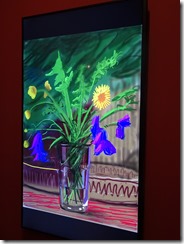 We then entered the first of several full-room installations that were created specifically for the exhibit. These included the evocative “Bigger Trees on the Water” that evokes an immersive experience that almost makes one feel they are in the middle of a forest; and “Four Seasons” a magical (especially the winter scene) four-display video sequence of walking along the same, lovely forested dirt road in each of the four seasons—and the critical role that computers play in the creation and management of each of these complex processes. 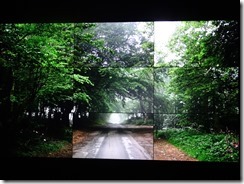 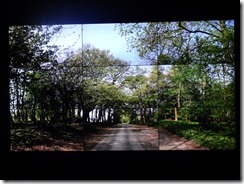 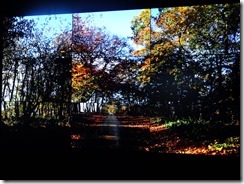 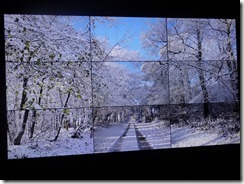 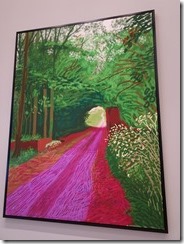 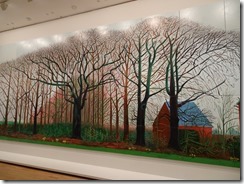 A series documenting his return to Yosemite Valley helped to demonstrate both his use and the value of computers in his creative process and his debt to Matisse in the evocative and provocative use of vivid colors and combinations. His fog-shrouded representation of the Merced Valley is especially engaging. 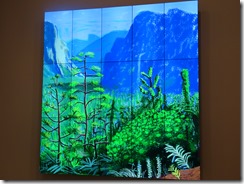 Our guide then explained the traumas the artist endured in the 1990s after suffering a small stroke, the loss of a growing number of friends from AIDs and the tragic and legally complicated drug/alcohol-induced death of particularly lose friend and these events led to the therapeutic process of creating two series—one on “Country Roads” and another “82 Portraits and 1 Still Life” in which he painted “dress and pose as you wish” portraits of 82 friends and relatives—each in the same chair and each over a three-day setting in which he attempted to portray the true personalities of each. 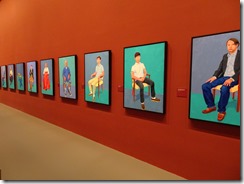 We then explored a couple of his fascinating experimental pieces, such as “The Card Players” where he took multiple photos of each individual element of the painting and assembled them in a way that simultaneously mixes very different perspectives, but still, despite its visual incongruities, seems to come together into a unified whole. Then there is the multi-panel video piece, “Jugglers” (that we have actually seen once before at the Guggenheim) which uses 18 different, independent screens to show a progression of jugglers, each performing different routines with different props, moving in front of, behind and beside each other from screen to screen. The exhibit, and the incredibly informative tour ended at the wonderful, previously discussed “Four Seasons” video art presentation. 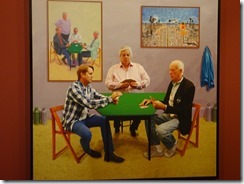 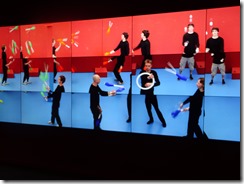 The National Gallery of Victoria Collection

After exploring the Hockney exhibition, we toured the rest of the museum, which provides a high-level overview of European (especially British and Northern European), and to a lesser extent Asian art, over the centuries. The European collection is strongest in its portrayal of 18th- and early 19th-century European art. Combining multiple fine art media, as well as decorative arts, it provides a credible overview with some nice representations of British masters like Turner and Constable, and some unexpected decorative arts pieces including furniture, a Tiffany vase, ceramics and a very unusual cradle.

We were especially intrigued by one gallery that was specifically laid-out in the format of a 19th-century “Salon” show, in which hundreds of works are displayed in virtually random order, in multiple rows that stretch practically from floor to ceiling. Although we have often read and heard how such displays were presented, this was the first time we experienced the actual visual impact. (We will take today’s more restrained, more curated approach.) 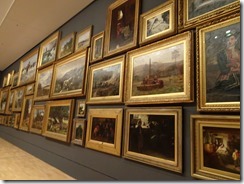 The late 19th– through mid-20th-century collection is much more limited, but does provide roughly one work apiece from most of the leading Impressionists and small, typically five- to ten-work overviews of 20th-century movements including surrealism, cubism, fauvism, modernism, expressionism, Art Nouveau and the Bauhus movement. Not much depth or explanation, but some lovely pieces and fun surrealist film clips.

The rather small Asian section of the museum, attempts to cover 18 countries, from Persia through Japan, has a couple of particularly nJapanese exhibits. These include: 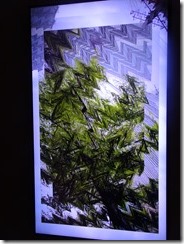 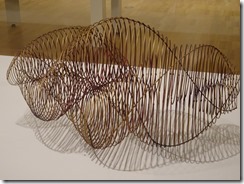 Melbourne is filled with some wonderful, and very crowded, restaurants. Our hotel did an excellent job is steering us towards many that we enjoyed

Although our South River complex restaurant experiences ranged from fair to very good, we greatly preferred the atmosphere, the casual environment, the knowledge and reasonableness of the staffs and especially the inventiveness of the food at the hot Flinders Lane restaurants at which we ate. We thoroughly enjoyed every one of them and would recommend each without hesitation. The only drawback was the almost impossible task of scoring reservations at reasonable dining hours. Every one of them was packed. This being said, we managed to get into every one we wanted by getting there early enough (or at just the right time) to get a walk-in seat or by going for lunch, which is somewhat easier to get into than at dinner—especially during the pre-holiday season when we were in Melbourne.

We stayed at the Westin Melbourne. It was a little confusing to find the turn into the hotel initially, but once we found it, it was fine. The staff makes this place shine. No question was too small, no ask went unanswered. All were great. A special thank you to James and Paul at the concierge desk. Great recommendations for restaurants and very patient in answering questions and giving directions. Front desk staff also very helpful. The room was very comfortable as one would expect for this level of a hotel. The bed was too soft for us on the first night so they changed it for a firmer one. When we returned a few days later, they had already changed out the bed to our liking. Wifi was free for members and worked well. Locations was central. Room had normal hot water pot, robes, slippers etc. Very comfortable and well worth the money.