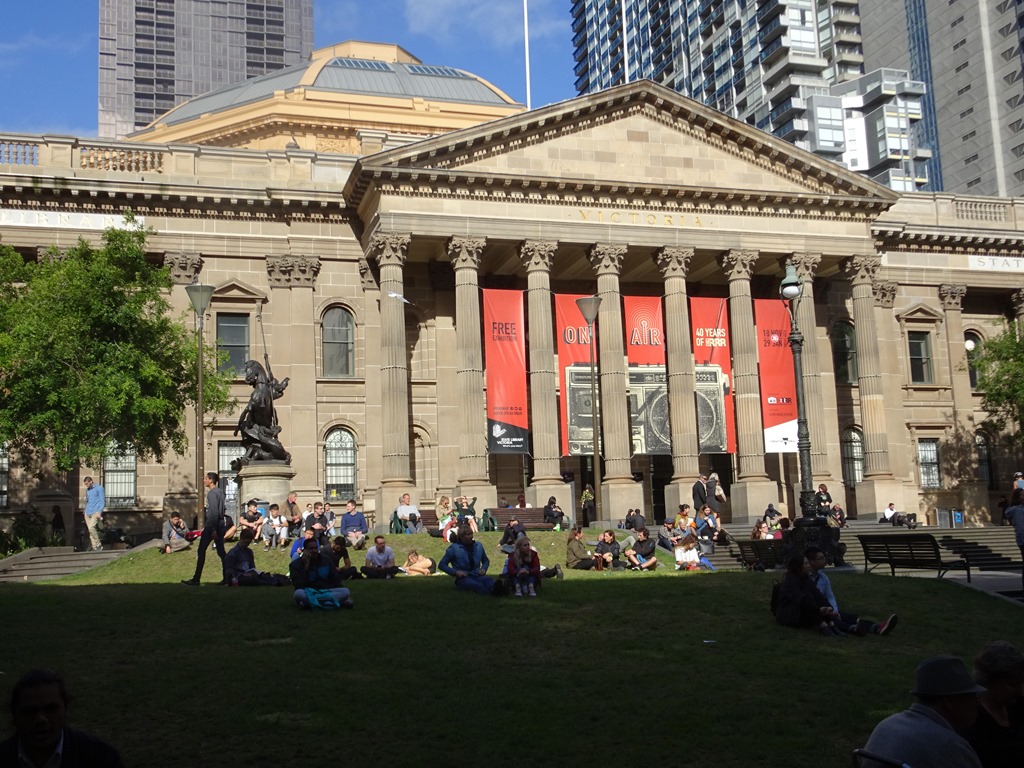 It had been a number of years since we last visited Melbourne. On this trip to Australia, we especially wanted to make a repeat visit. We remembered it as a very kind city (truth be known, most Australian are kind. But when Joyce had a delayed reaction to the sun right after we had ordered our food in  a restaurant many yeasr ago, the restaurant not only packed up the food to take back to the hotel on plates, but they came by the next day to pick up the plates.)

Melbourne was founded in 1835 and initially grew rapidly by selling property to early settlers. It exploded when gold was discovered 70 miles away in 1851; quadrupling its population in a mere 10 years. These gold riches funded the building of wide streets, large parks, museums, colleges and many grand, stately Victorian buildings. While much younger than its rambunctious rival city Sydney—which has long-since surpassed Melbourne in size—it has been viewed, and generally acted as the staid, refined and responsible sibling to its older, prodigal sibling.

Although it took a long time to dispel this image, Melbourne has grown into a much more cosmopolitan city of more than 4 million people (in the metro area) from 110 different ethnicities, who speak 130 different languages. It has fostered and developed cutting-edge arts, its restaurant and nightclub scene has exploded and its adventuresome side has been exposed, such as in its funding of dozens of avant garde buildings, its efforts to keep the city (and its extensive tram system) running 24 hours a day, and its efforts to encourage and permit large bodies of street art.

We reacquainted ourselves with Australia’s grande dame by taking a very informative, three-hour walking tour with “I’m Free Tours”. This tour, as with many others we have taken, integrated a history of the city into an overview of many of the city’s primary sites and a number of tips as to how to take advantage of what the city has to offer. First for the history:

Victoria and the Melbourne area have been home to aborigines for an estimated 40,000 years. In 1835, an English-born Tasmanian land speculator named John Batman came to what is now Melbourne and crafted an agreement (which the indigenous people could not read) to “purchase” 600,000 acres of land for a bunch of blankets and tools. Although the agreement was declared invalid, Tasmanian farmers bought land from Batman and poured into the fertile land, which grew to a population of 77,000 in 20 years. This created a fait a complete and the government eventually endorsed the sale.

Bolstered by this growth and the difficult communication with Sydney, the much older, larger capital of New South Wales, the Victorian government petitioned England to become an independent colony. A mere couple weeks after this petition was formally accepted, gold was discovered nearby hills in 1851. This led to a Gold Rush which proved to be larger than those of California, Alaska and Canada combined. The population exploded and, since Victoria had become an independent colony, the vast majority of the wealth remained in the state, rather than being funneled off to Sydney. Melbourne grew so rapidly that it not only became larger than Sydney, but also the second largest city in the British Empire, behind only London. And since so much of the wealth remained in Melbourne, it became also temporarily, the richest city in the world.

This wealth led to the economic boom of the 1880s and the funding of huge infrastructure projects and grand Victorian buildings—both public and private. By 1893, the wealth and the building boom crashed. Melbourne fell into a deep depression and 50,000 people left the city (which resulted in Sydney recapturing its initial position as the country’s largest city, a title it has retained ever since. It finally took its place in the “civilized” world when it finally created a modern sewage system in 1897.

In 1901, the growing number of Australian colonies united into a single country. Since neither of the country’s two major cities could agree on which should become the nation’s capital, they entered into the same type of bargain that resulted in Washington D.C. becoming a new, planned capital city that was created in the swamps. The country decided to create its own new, planned, capital city of Canberra, roughly halfway between the two large cities. In the 27 years that it took to create this new capital and prepare it for occupancy, Melbourne was named as the interim capital.

Our tour took us past a number of the central city’s most historic sights, down its most notable streets, and through many of its most popular arcades and vibrant lanes and alleyways. Among these sights are: 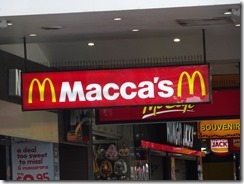 We also explored the interior of some of the CBD and neighboring sights on our own. Among these were:

Victoria State Library, with its beautiful dome that spans what used to be a large reading room, but is now an internet access room. The library also has a number of rotating exhibits that explore different parts of the state’s history. One, for example, examined the 40-year history of RRR, an independent, community-supported, un-playlisted radio station that champions local, alternative, independent music that is sometimes recorded, and sometimes played live on the air.

Of greater interest to us was a large exhibit that explored “The Changing Face of Victoria. The exhibit described and presented archived artifacts and photos that traced the history and culture of the state from its founding by John Batman, through the 1850s Gold Rush, the population and economic boom of the 1880s, the depression of the 1990s, the state’s status as an independent colony and its incorporation into the Australian nation, its participation both World Wars, its hosting of the 1956 Summer Olympics and the evolution of its culture (from football through classical music and from auto travel to public protests). Although the entire exhibit was interesting, we were especially taken by suit of armor worn by bushranger, Ned Kelly (see the above discussion of our CBD walking tour for a discussion of the exploits of Kelly and his gang). 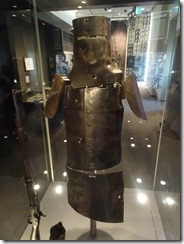 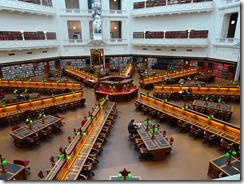 Parliament Building, where we took a tour to learn the history of, understand what goes on in, and to see the details of this 1850-60-era building that was designed and built during and funded by the Gold Rush. It was intended to demonstrate the wealth and grandeur of what was then, one of the wealthiest cities in the world. The tour took us through, and fully explained the functions and operations of the structure’s five most important rooms: The 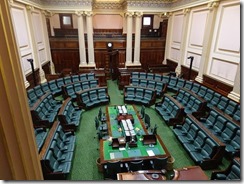 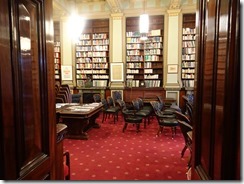 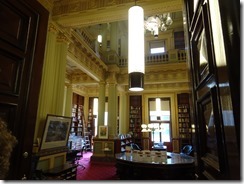 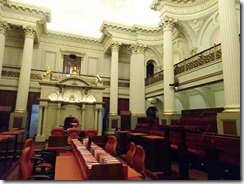 Our guide explained the imagery and symbolism of the images in each of the beautiful chambers, how each one was constructed in only 10 months and the relative role of each chamber in the legislative process. He explained and displayed the sometimes rowdy processes by which they went about their daily business and then staged a mock debate and vote to demonstrate the process. We learned about the some of the world firsts that occurred in these chambers (such as the first eight-hour work day and the first mandatory seat belt law). We even saw the graffiti that journalists in the press gallery created while waiting for news that they could actually report. Overall, a nice overview of a wonderfully impressive building.

Hotel Windsor, the grand 1887-era hotel which has and still plays host to royalty and stars, and still serves High Tea every afternoon.

Bourke Street Mall, which was all decked out for the Christmas season with model tree ornaments hung above the mall and the annual display of Christmas windows at the Myers department store (similar to Macy’s in New York).

South Bank of the Yarra River, including the striking Convention Center and Exhibition Center with its cantilevered roof, the Southgate restaurant and shopping complex and most impressive of all, the huge, upscale Crown complex. This latter complex contains dozens of upscale restaurants that span a large portion of the river bank, a hotel, casino and a lovely upscale shopping mall that has one of the most amazing Christmas displays we have ever seen. In addition to a huge, elaborately decorated tree, it has a highlight display that changes every year, This year’s was a display of about dozen roughly 12-foot tall Christmas ornaments that line a large staircase. The ornaments open in sequence, with each displaying an elaborate Christmas scene.

Queen Victoria Market, a two-square block, 17 acre landmark is the largest open-air market in the southern hemisphere. Built in 1878, it was initially dedicated to produce, but has since been expanded to add meat, seafood, deli, specialty foods and a number of non-food items. It isn’t that we losing interest in markets. We would absolutely love to have one just like this near our own home. But after visiting and gushing over the selection of fresh everything in so many markets around the world, we are running out of superlatives to describe them.

National Opal Collection, a “museum”/retail store where we began by going through a high-level computer-guided overview of the origin, the mining and the classifications of opals—about 70 percent of the world’s production of which is in Australia. 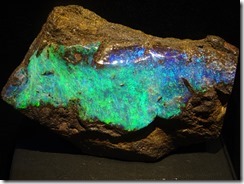 Street Entertainers that are spread across the city, in every CBD mall, all along the riverfront, in parks and on a number of street corners.

The interplay of the old and the new, with 19th century Victorian masterpieces and two-story terraced homes with cast-iron-laced balconies and fences, with modern skyscrapers and modernist buildings.

The overall youth and vitality of the city, where people seem to be taking full advantage of and contributing to the atmosphere of the young and dynamic city.

The comprehensive mass transit system, which includes a huge tram system that is claimed to be the largest in the world, with 250 kilometers of tracks and 500 cars. All tram rides are free within the CBT trams (and extend for miles out of city to distant suburbs and connect with trains to more distant locations). The free service includes a free Circle Line (around CBD) that uses vintage cars that run around the city (every 15 minutes in each direction) and includes a narration with many interesting facts and descriptions of sites that are accessible from each stop.