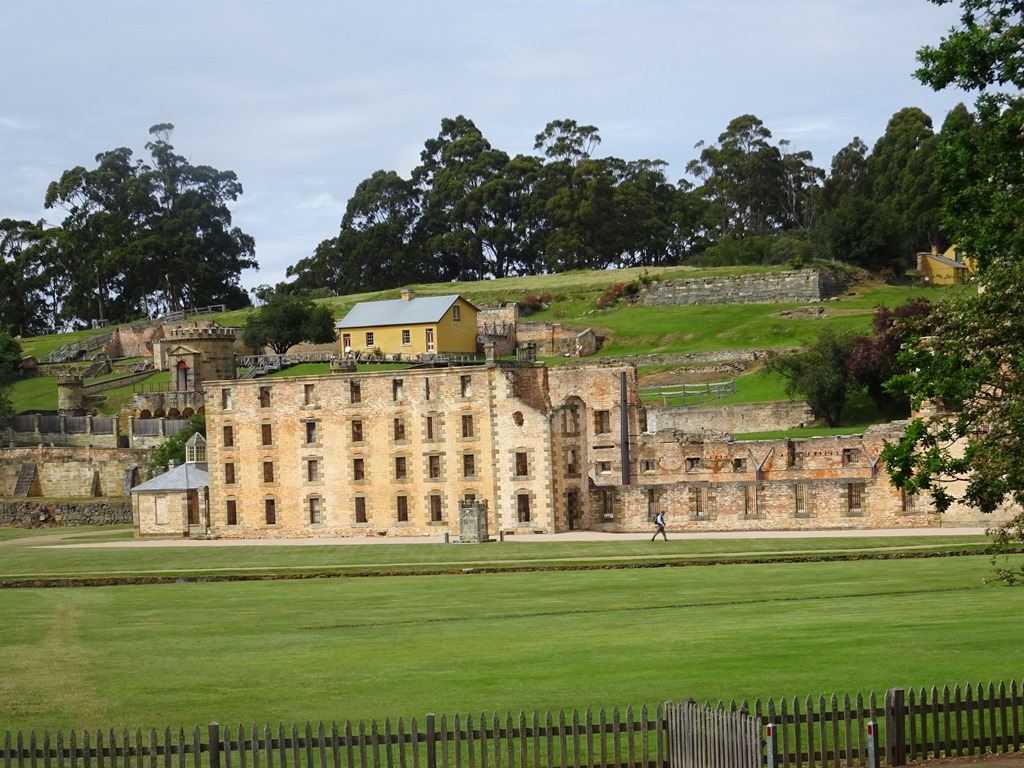 Tasmania, or “Tassie” as the Aussies call it, is an island the size of Switzerland. It lies about 120 miles off the south coast of Australia—the last stop before Antarctica. Although discovered by Europeans as early as 1642, it was first settled as a harsh British penal colony.

Today, life in Tassie is much less harsh. The land, with its cool climate, rugged shorelines, open landscapes, rolling hills and mountains and many national parks is one of the country’s primary recreation areas. Moreover, its huge variety of plentiful fish and shellfish, its beef and sheep, and its long, cool temperature growing climate make it a culinary haven. It is the source of some of the country’s best seafood, meat, produce, cheese and cool-weather varietal wines.

We had a week there and started near the southern tip of the island. The next several blogs follow our Tassie route, including:

We began our exploration of “Tassie” near its southern tip in Port Arthur—to The Port Arthur Historic Site which is the home of the primary penal colony and current World Heritage Site.  The site’s about 30 restored buildings, a museum and a number of ruins attempts to tell the story of this end-of-the-world outpost that was home to convicts, soldiers and guards, and to a handful of hearty families who tried to make a life for themselves at this remote settlement. Our admission price included entrance to the information center where an exhibit provided insight into living conditions. They also have several tours of the grounds including a high-level 45-minute introductory walking tour did a great job of explaining life in Port Arthur. Our admission also included a rather cursory (and frankly, somewhat a waste of time) harbor cruise of the two offshore islands. We also had time to take our own, independent walk through the grounds (including watching part of an ongoing archeological dig), with particular time in the grand Commandant’s house, in the museum (with artifacts that highlight the very different conditions experienced by the prisoners, the soldiers and the civilian officials and their families) and finally, the dreaded “Separate Prison” (solitary confinement and sensory deprivation cells), later converted into an insane asylum. 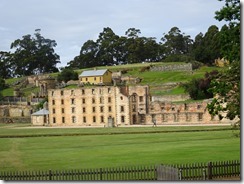 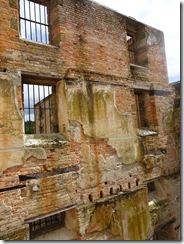 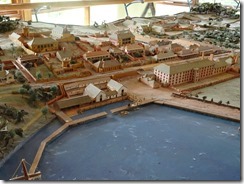 England sent about 166,000 convicts there (including boys of age 5 and above). Most were the worst of the worst types of prisoners—those who continually got into trouble in the regular prisons, and those who tried to escape. The place was so isolated that escape attempts were futile—it was a place to punish, rather than to rehabilitate prisoners. And punish they did. Prisoners first suffered from a hard a long, difficult and very crowded passage beneath deck of a ship…no room to lay down, and without enough  space to completely stand. Once they arrived, they were assigned to labor details based on past experiences and skills (if they had any).

While the colony began in 1830 as a small, prison-run lumber camp, it ended up producing a wide range of goods, for both its own and for government use, and increasingly to sell to third parties: everything from shoes, to bricks to ships. Prisoners reclaimed land from the shallow bay, quarried rocks, built roads and their own buildings, and even ran a coal mine (in a nearby location). Less violent convicts were leased out to local settlers to provide low-cost labor. Some worked in chain gangs. Others earned relatively “cushy” jobs, such as serving as cooks, carpenters, hospital orderlies, household service for prison officials and even as overseers, who monitored and meted out punishment to other convicts. Some were taught trades, during 12-hour work days plus, another two-to-three hours per evening instruction.

Disruptive and violent criminals, and those who tried  (but never, in the history of the colony, succeeded) to escape were dealt with extremely harshly. Some were forced to wear, carry, walk in and work in leg irons that, depending on offence, could weigh more 20 kilograms. Lashes, which were usually administered by particularly vicious and sadistic convicts, could come in sets of up to 100 (all monitored by surgeons who were responsible for stopping them when the victim was within “an inch of their lives). Even then, after the victim was dragged up to the hospital, their raw and bloody backs were treated with salves of animal fat, salt and lemon! Once recovered, any remaining lashes were administered. Some convicts received well over 1,000 lashes over their sentences. 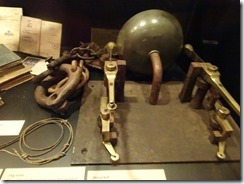 Nor was physical pain the worst punishment. Solitary confinement, which could last for months, entailed identification only by cell number and total silence. Men were locked up for 23 hours a day, with one hour for exercise in a bricked-in enclosure during which the men were required to wear hoods. Those who objected to this treatment were subjected to sensory deprivation—stripped and confined to small, cold, damp, dark stone cells with no mattresses and served only bread and water for days on end. Sentences of 45 days of such treatment was not uncommon. Convicted murderers were sometimes sentenced to as much as 24 months of such treatment. No surprise that some were driven mad. Many others were driven to recidivism, with some serving five or more terms and, when they were old and decrepit, their terms were over and the prison closed, became wards of the state, unable to survive in society.

Cruelty in dealing with criminal was not just a practice, it was the philosophy under which this and other penal institutions were run. The idea was to grind “deviant” behavior out of people by making punishment so severe—and so visible (as in forced attendance at floggings)—as to make violation of laws and rules unthinkable. It was not until 1853 when the Commonwealth stopped sending new prisoners to Port Arthur, and after the closing of the facility, that this approach was discredited and abandoned.

By the time the penal colony finally closed in 1877, the buildings had been converted into institutions for aged and physically and mentally infirm convicts. Much of the land and many of the buildings were sold or auctioned off for materials and the area was transformed into a township named Camarvon, in an effort to reduce the stigma of what had since become seen as a discredited and inhumane institution. The government purchased it in 1979 and converted into a National Historic Site.

While the prisoners’ lives were no pieces of cake, enlisted soldiers didn’t always fare much better. Enlistees, who often came from the same social classes and backgrounds as the prisoners (and often identified more closely with prisoners than with their officers) typically had to endure seven-year, and often 14-year assignments in this bleak environment, far from friends and families. And while they did get to live in stone barracks, rather than the wooden barracks in which many prisoners lived, they sometimes endured punishments (such as lashings) that were even more severe than those of prisoners. Some in fact, were prisoners before they joined the military.

But while prisoners and enlisted men may have suffered, the lives of officers, high-level civil servants and their families were a very different story. The camp’s ten commandants, who by all accounts lived very comfortable (and in some of cases extravagant) lives, believed that officers and civil officials, all of whom came from upper classes of society, were their of their own free wills and should to be encouraged to remain. They lived in fine, prisoner-built homes, had servants, had exclusive access to their own gardens and even a botanical garden and cricket courts, and even had opportunities to hunt, fish and eat fresh meat and fish. While their social lives may have generally been limited to people in their own classes, they even got some external social stimulation from whaling captains and explorers who often visited.

The Port Arthur area, however, contains more than the penal colony. It is also a site of great natural beauty: an incredibly rugged coastline that has been created over the millennia as the winds, rains and waves of fierce Antarctic storms pummel the rock of the southern Tasmanian coast. A coast that in different spots, demonstrates the inevitable effect that water has on rock. A small section of the Southern Tasmanian coastline demonstrates many of these effects, all within a couple miles of each other. For example, at sites like the Tasman Blowhole, Tasman Arch, Devil’s Kitchen and Tessellated Pavement, you can see:

Or sometimes, the continual interaction between rock and water create other magnificent features, such as tessellated rocks, an eerily regular, geometric pattern of cracks and rises that appear to have been created by man, rather than by the much less structured forces of nature. 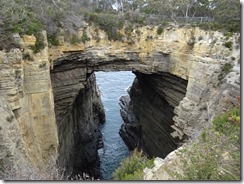 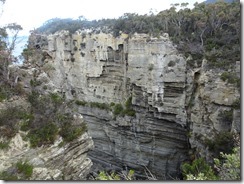 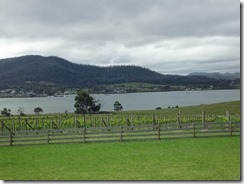 Port Arthur is in a somewhat remote area. We stayed at the rustic Stewart Bay Lodge. The unit was surprisingly nice and well done. It had a large living room and kitchen area. Bedroom and bathrooms were good size. All furnishings are clean and in good order. It had a washer dryer but we couldn’t figure out how to make it work. The only wifi was at the restaurant. Nor did the unit have a telephone (so we couldn’t call the office to figure out how to use the washer/dryer). All-in-all, a nice place to stay.