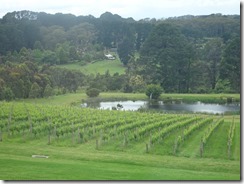 Our primary reason for staying in Queenscliff Australia was to catch a ferry the next morning to go into the Mornington Peninsula Wine Region. This cool climate region, just off the Tasman Sea, specializes in pinot noir, chardonnay, pinot gris and lesser amounts of even some Syrah. Our ferry let us off in the peninsula town of Sorrento. Our approach to land provided views of seaside cliffs, many of which were topped by large vacation homes. The town of Sorrento, meanwhile, combines rows of upscale homes and apartments, a quaint main street lined with specialty shops (including the type of produce and vegetable stores that we who live in San Francisco (and most other U.S. towns) can only dream of. 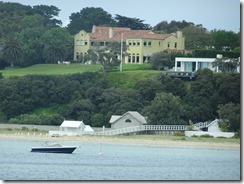 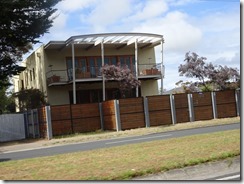 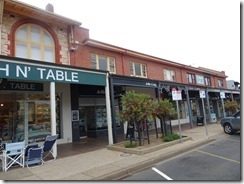 Then, as we drove down the cost to less affluent tourist towns, we passed campgrounds and beaches lined with rows of small, attractively painted, one- or two-room beach houses. Then, up, up, up the steep, forested and scenic Arthur’s Seat Road, passed scenic lookouts to the top of a tourist gondola to the top of the road and two view restaurants. 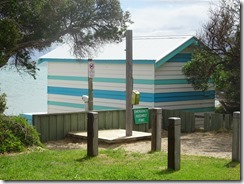 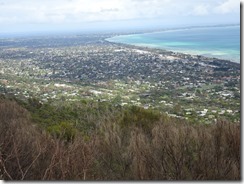 Although the scenery was lovely, we were not there for sightseeing. We were there to sample the region’s wines. And sample we did—ten wineries that had either been recommended by winemakers we had met along the way, or those whose wines we had sampled (and enjoyed) at restaurants. We sampled wines in both of the peninsula’s primary growing regions—in the center of the peninsula around the town of Red Hill and, further north, near the town of Mornington.

We found that many of the wines from the higher-altitude (about 200-300 meter), the cooler climate (about two degrees Celsius) and the volcanic soil of the Red Hill area didn’t have the body, the concentration of flavor, or the complexity that we tend to prefer. While this was especially true of the Shirazes and the pinots, it was also true of many of the whites.

Yet, we found some exceptions. We found plenty of body and complexity in a number of the wines from two of this region’s wineries:

We were also impressed by a number of the wines from two wineries that produce grapes from the lower-altitude, warmer, limestone-based vineyards of the northern part of the peninsula. This environment—that in the hands of the right winemakers—can produce riper fruit, finer tannins and more balanced wines. We found a number of these wines, across different varietals and styles, from two wineries.

Some of the wineries that we visited (and some where we didn’t taste wines) share more in common than wine: absolutely stunning premises. Among the standouts in atmosphere are Polperro, with its beautiful landscaping; Montalto, with its sweeping vistas and sculpture garden; and especially Port Phillip with its dramatic facilities, its excellent restaurant (see below) and the amazing panoramic view over acres of vineyards, lawns, ponds, and distant landscape. 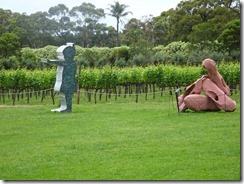 Although we went to Mornington primarily for the wines, we also took the time to partake in some food from two very different restaurants: The refined cuisine of the restaurant at the beautiful Port Phillip Winery and the large selection of relatively unadorned local seafood at The Rocks.

At Port Phillip Restaurant, we stared out the wall-to-wall windows while enjoying two-course lunches, each consisting of different dishes. These were Queensland spanner crab with squid ink pasta, puffed rice and the nice texture of crustacean crumble; sea trout mi cuit with greens and grain mustard sabayon; sole en papillote with mussels, veloute, asparagus and pistachios; and beer-braised suckling pig with crispy hocks, cabbage, apple and coffee-beer sauce. While we were absolutely tempted to partake in one of our favorite Kooyong wines with lunch, we had to pass. After all, we had a full afternoon of tasting before us.

The Rocks has a beautiful view over Mornington Harbor. It also has a large selection of fresh, local seafood. We tried to sample as many different types of shellfish as possible. We began with a mixed shellfish tasting plate, which included chilled South Australian and Tasmanian (the latter of which was our favorite) oysters, prawns, pippies (small clams), mussels, marinated octopus, scallops with salmon roe and local abalone. We then each had tempura softshell sliders (with shells that, while certainly not hard, were much more crunchy than we are used to), followed by a quartered blue swimmer crab with noodles and vegetables in a slightly soy-based lemongrass, onion and celery broth. While the noodles and broth were both quite good, the crab had a mushy texture. (Although we hadn’t had this crab before and didn’t know if this was normal, the manager agreed that it was not as it should be, comped the dish and offered us another dish (which we were too full to take advantage of). We added in a bottle of one of the day’s favorite wines from our tastings—the 2016 Yabbie Lake Pinot Gris.

We stayed at  Lindenderry at Red Hill. As with most places in wine regions, one needed a car to get here and to go anyplace. But it was beautifully set in a vineyard  The room was very big as is the bathroom. The place was nice, but it was also very expensive. At this price level, we expect more such as a magnifying mirror in bathroom, nicer towels, complimentary bottle of water, nicer shower, etc.