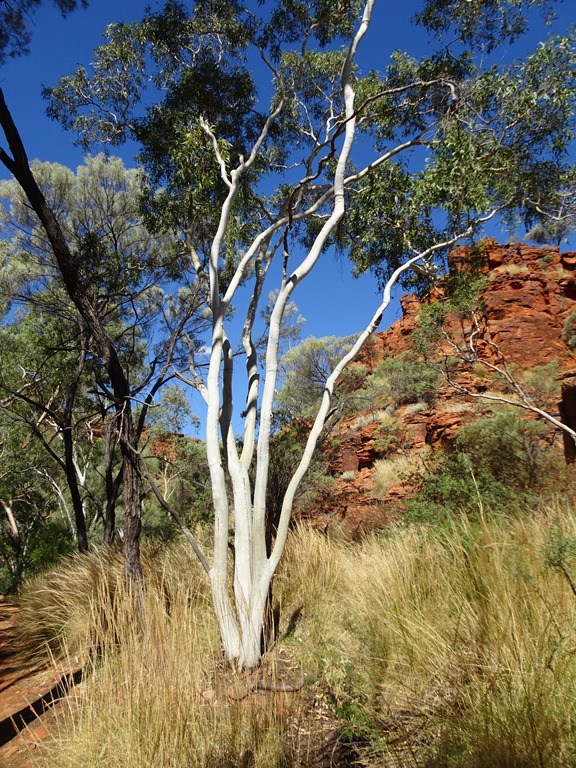 From Ayer’s Rock, we drove about 3 hours through the desolate outback to Kings Canon National Park in Australia’s Northern Territory.  In a region characterized primarily by rolling hills of red (iron-oxide-based) sand and sandstone, low grasslands and bushes, Kings Canyon provides a dramatic break from the routine. The deep canyon, flanked by steep, shear, 850-foot rock walls, was created about 350 million years ago when the rising, buckling and folding of the earth’s surface brought ancient Mareenie sandstone to the surface. Over the next several million years, rain and wind gradually widened and deepened the cracks in the sandstone, forming the canyon with shear walls that reach 800 feet in some spots.

As cracks in the canyon wall grew into fissures, large pieces of the wall fell into the canyon and were, over the millennia, worn down into smooth domes. The shaded canyon, which drained and retained water in surface’s cracks, provided a mecca for the growth of plants, including large patches of tall yellow grasses with deep roots that both stabilize the surface and help ensure a large water supply. This in turn, brought insects, reptiles, small birds (which ate the berries and fruits of the plants) and large raptors (that ate the reptiles). This ecosystem, brought invited stops from visiting mammals (especially wallabies, small Euro kangaroos and a number of rodents) and increasingly settlement by the Luritija people.

In spite of the very hot (100 degree), humid weather, we still managed two hikes in the area.

The first hike, Kings Creek Walk, was really an easy, 2.8 kilometer walk. The interpretive signs explained the wildlife and views of the dramatically-carved canyon walls. 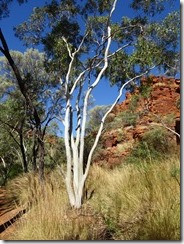 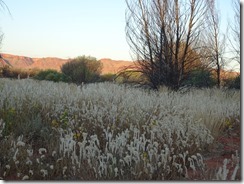 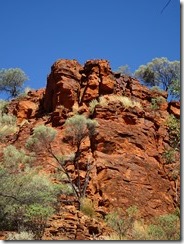 Although the Creek Walk is interesting and relaxing walk, and the only one that is feasible in the intense heat of the afternoon, the real prize came the next morning with a longer hike. The park wisely shuts down access to this hike at 9 AM on days when the temperature is hot so we started at 6:30 AM when it was still cool and breezy. This Kings Canyon Rim Walk is a six kilometer (about eight km including walks to a lovely viewpoint and through the Garden of Eden oasis) trek that begins with a very steep set of roughly 500 stone steps that lead up from the canyon floor to the north rim. But before you can really enjoy the area, you have to first get past the line of tourists that don’t normally hike and who don’t understand that they should move to the side when they need to catch their breathe so that others can pass them. Most of them fortunately stop at the top of the steps and leave the rest of the hike to those in better shape. 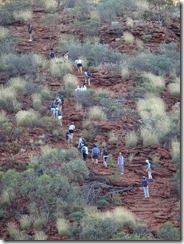 The hike then crosses a landscape of weathered sandstone domes, then back down into the canyon, through the lovely Garden of Eden and a permanent waterhole, then back up along the south rim to the starting point. 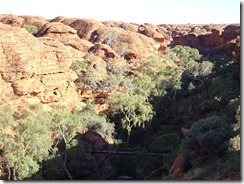 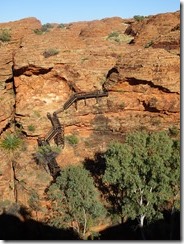 This, in particularly is a beautiful walk. The sandstone domes that began as sand, were compressed over the millennia under the pressure of an inland sea. Infusions of silica-rich water, meanwhile, acted as a type of cement to create the rock. The rock fractured into roughly square shape pieces, the edges of which were continually eroded to create a landscape of thousands of sandstone domes, each of which bore evidence of multiple layers of sand and ripples that was formed by winds that blew the initially free-flowing sand. 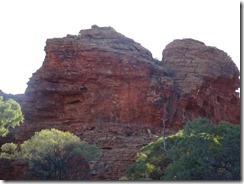 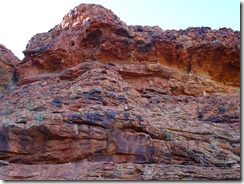 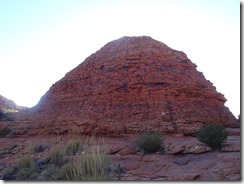 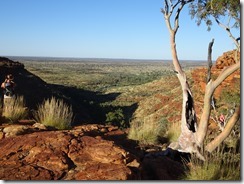 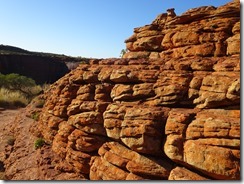 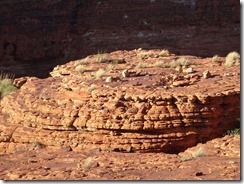 The most fascinating part of the trail can be glimpsed from views up from the bottom of the oasis, but especially from along the south rim, after you climb up from the canyon floor. You are rewarded by incredible views of sheer canyon walls that contain all the colors of the eons—the whitish-gray of the original sand, the reddish-brown of iron-oxide deposits, the dark rust-colored streaks from where rainwater filtered through the rock, and the black and green of algae that formed on moist surfaces. 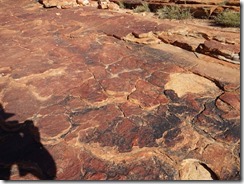 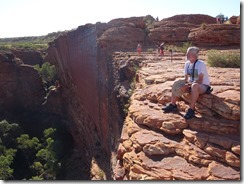 Another surprise came on the last leg of the walk. As we crossed another patch of sandstone domes, we came to a shaded depression that housed remnants of the time before Australia split from and whose plate drifted from what was then, a much warmer Antarctica. This remnant; a small patch of fern-like Cycads, that normally thrive in much moister climates, such as in the transition between rainforest and mangrove forest through which we walked along the Northern Queensland coast, on the way to Cape Tribulation. 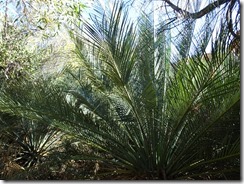 Kings Canyon also provided another opportunity to catch the glow of a sunset on another rock formation—this time on the canyon walls. Although this sunset was moderately better than the previous evenings at Ayer’s Rock, it nowhere near approached some of the mythic sunsets we have seen over other canyon walls (such as Grand Canyon), over mountain peaks (such as the Grand Tetons), or over bays and oceans (such as Acadia or even our own home in San Francisco). 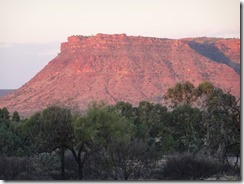 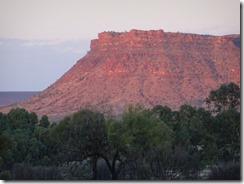 Dining options in the area’s of Kings Canyon Resort are, as would be expected, limited.

We stayed at the Kings Canyon Resort in one of the deluxe rooms. Upon opening our door to our room, we were met with a strong sewer smell. As explained to us, when a room is not used, the water in the toilet tends to dry out which allows the smell to escape into the room. Good explanation but we wanted another room. After they tried unsuccessfully to convince us that our room now smelled fine, they finally agreed to move us to another room which was ready a few hours later. We suspected the delay was lengthened as we weren’t cooperative with staying in the original room, but who knows. The room itself was comfortable other than the pillows. It had a great 2-person Jacuzzi (which we didn’t use) that had a large window to the outside. The room itself was a little dated but you are in the outback. All-in-all, it was fine.