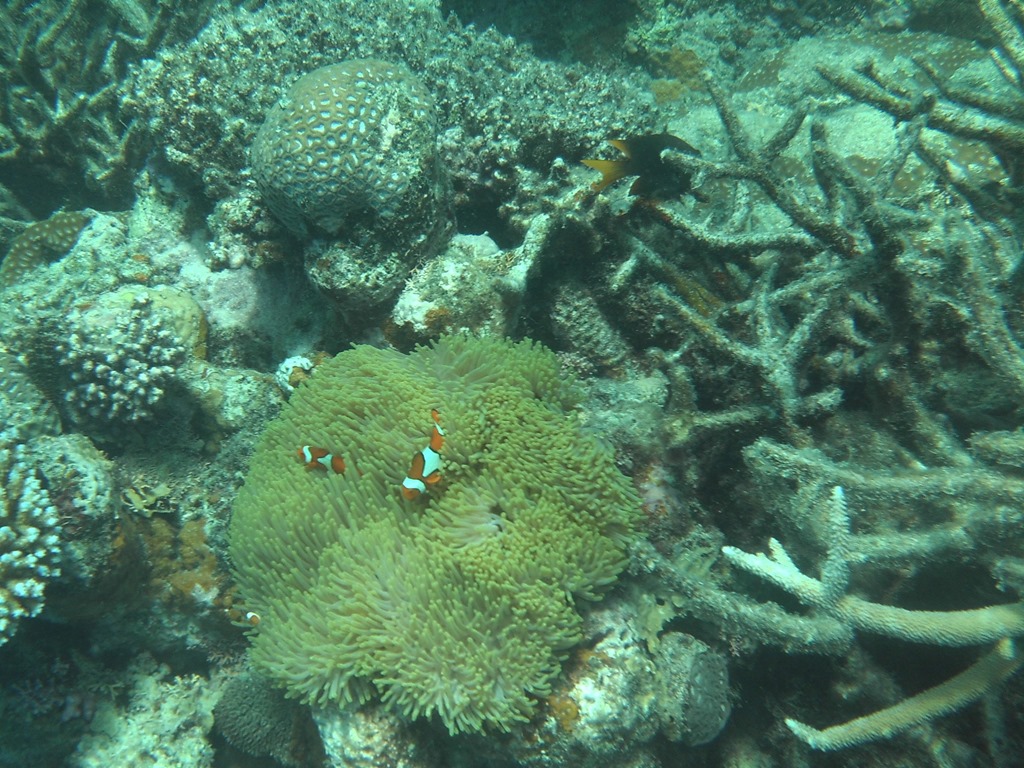 Our last full day in Port Douglas Australia was on a snorkeling trip to the Outer Reef of the Great Barrier Reef. On previous Australian trips, we dove and snorkeled a few section of the Great Barrier Reef. Each of these have been off of islands (Lizard, Heron and Wilson) to which we had to fly from the mainland. This day trip, with Wavelength Reef Cruises, explored some of the coral and fish in the inner and outer reefs off the coast from Port Douglas—no flying required.

Getting Educated on the Way

During the  hour-and-a-half cruise to just inside the outer edge of the reef, the excellent resident biologist began with an overview of the nature of the reef and the most effective ways of approaching fish. For example, don’t stare at them (move your head and eyes from side to side, as if you were navigating rather than focusing on a particular animal); approach them from the side (swim alongside them and gradually move closer rather than from the rear); and paddle slowly while keeping your arms at your side (rather than using them for propulsion).

He then asked the 30 snorkelers what we were most anxious to experience on the reef. While most were game for anything, a few people had special requests for sharks, turtles, manta rays, octopi and clownfish. He then discussed each one, identifying the environments and times of day in which we would find them, how best to look for each, the behaviors to look for and how best to approach each so as to get the best look. For example:

Then we went to 3 different dive sites—each as or more spectacular than the other. Once at each site we were free to snorkel anywhere we wished However, many of us spent much of our water time with our guide, who was able to find and identify creatures that we would have otherwise missed. We saw: 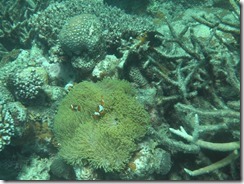 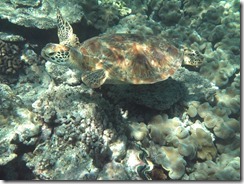 Then there were the: 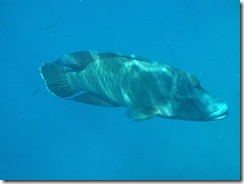 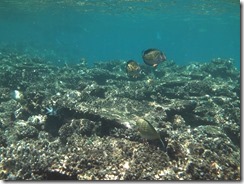 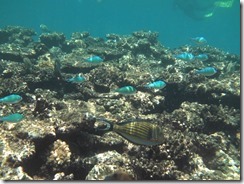 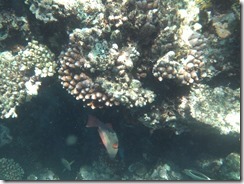 While the sea life was amazing, we also saw endless blankets of beautiful coral of virtually every type (brain, staghorn, elkhorn and especially elaborate plate) and of virtually every color (other than red and yellow). The colors (especially the brilliant blues) are particularly pronounced in the crystal clear waters outside the reef (the water was so calm that we were able to do a drift snorkel in this area). And we also saw a small handful of dramatic giant clams (although most of these had relatively monochromatic black mantles). 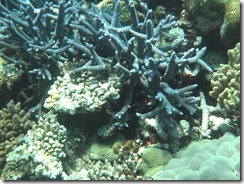 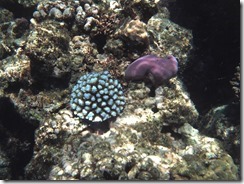 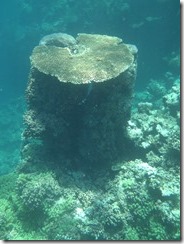 The guide also told us how to distinguish coral that is healthy (usually some shade of brown or burnt orange), stressed (typically a bright green, yellow, or blue) and bleached (grey) and the synergistic biological relationship between the coral and algae as the coral is stressed. He explained how the reef can create its own weather and continually rejuvenate the itself by creating updrafts of warm, moisture-laden air. These form into clouds that waters (both via rain and “cloud striping”, which occurs when trees pull moisture directly from low clouds and fog) the rainforest, carrys the nutrients from decomposing plants down to the mangrove swamps, and serves as a nursery for baby fish and coral that continually repopulates the reef. (Crocodiles also play a vital role in this cycle by eating and otherwise controlling the number of predator fish (barramundi, coral trout, etc.) that would otherwise eat the babies in the mangrove swamp nursery.

And we learned how changes in global and water temperatures and El Nino and La Nina patterns disrupt this complex cycle in ways that, while impossible (at least with current levels of climatic understanding) to fully predict, are particularly dramatic in this fragile, interconnected ecosystem. This is particularly true for the future of a reef in which many coral thrive in temperatures between 27 and 29 degrees (Celsius), but die in temperatures above 30 degrees.

This was, by far, the most educational of all of the snorkeling tours—and indeed of most of the many nature tours we have taken (with the notable exceptions of one-to-two week tours of the Galapagos and Antarctica). It was also one of the most beautiful of our many snorkeling trips. But for all the superlatives we can lavish on this tour, it was, for us, a preview to the main act—a three-day revisit to Lizard Island, one of our favorite spots in the entire world. And that is the topic of our next blog.