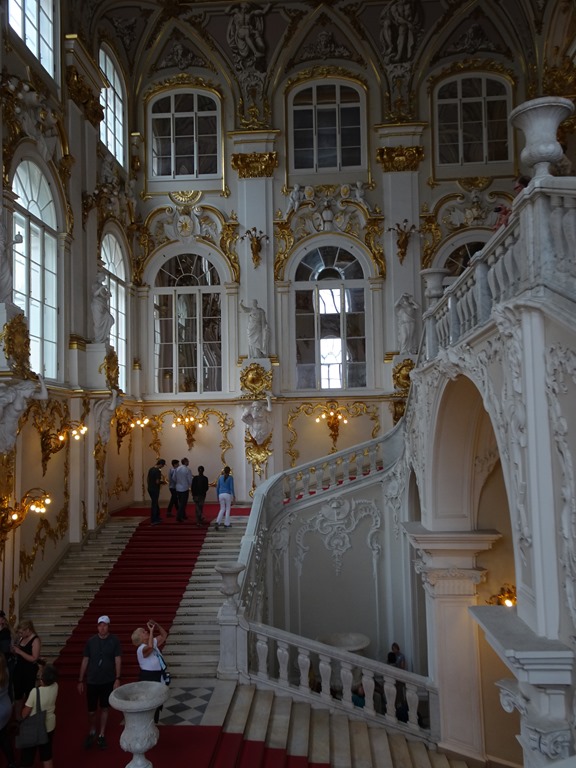 Our most vivid memory of our last trip to St. Petersburg was the Hermitage Museum. It was just as impressive the second time around.

The Hermitage Museum has a phenomenal collection of world art (with an overwhelming focus on Western European art) up through the 18th century. It is housed in an equally phenomenal set of four inter-connected former palaces of the Royal family (see our post on St. Petersburg architecture and palaces). These buildings were, during the Romanov era, and again, thanks to decades and billions of dollars of painstaking restoration, huge, luxurious and lavishly decorated: So much so that one is tempted to focus as much on the intricately patterned marble and parquet floors and the elaborately carved, gilded and painted walls and ceilings as on the phenomenal collection of art. We tried to maintain a balance.

Given the size of the museum and the collection and our limited familiarity with much of the main museum’s art—not to speak of the long lines of people waiting to get in, from early morning to mid-afternoon–we decided to take a small Viator group tour (five persons) that provided pre-opening early admission in front of the crowds After some initial confusion, our guide more than delivered on the company’s promises by guiding us to and providing informed explanations of many of the most important sections and individual masterpieces. And she did so in a way that avoided the worst of the crowds.

She began by explaining each of the four Hermitage buildings and how and by which of the Czars they were originally used, the origin and characteristics of their Russian Baroque style and the role and décor of each of the more than dozen State Rooms that we visited: everything from the exquisitely crafted parquet floors, to the intricately carved columns and walls, ceiling murals, the paintings and tapestries that lined the walls and the furniture and priceless decorative objects.

We began at the awe-inspiring Grand Staircase and progressed through rooms including: 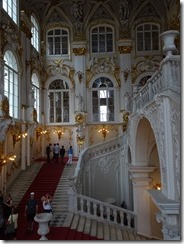 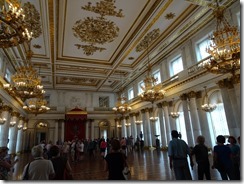 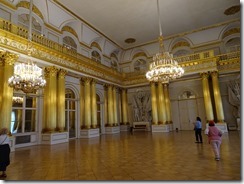 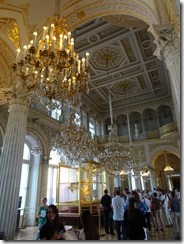 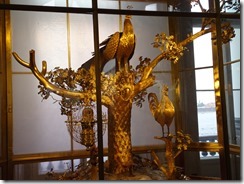 The floors, ceilings and carvings of the Painting Galleries are almost extravagant as those of the State Rooms. They, however, have a lot more going on inside the rooms. Our tour took us through various rooms filled with masterpieces.

Dutch Masters in the Hermitage Museum

The highlights in this room were the over 30 Rembrandts, the largest collection of his work outside Amsterdam. And not just any Rembrandts, but those including “Return of the Prodigal Son”, “Descent from the Cross”, “Portrait of an Old Man in Red” and “Abraham’s Sacrifice”. 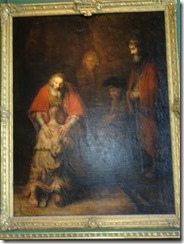 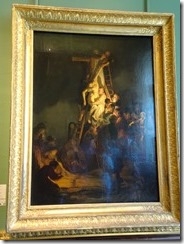 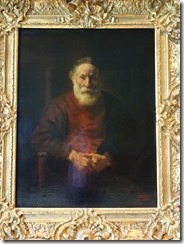 Here we saw della Robbia’s first use of painted terra cotta and two da Vinci paintings of “Madona and Child”, one from the very beginning of his career and one from near the end of his career. This allowed us, with the help of our guide, to see how the artist’s vision and style had evolved. The rooms of the Italian Galleries sometimes outshone the art, as in the spectacular Billiards Room, with its intricate parquet floor, doors of boiled tortoise shell, its carved plaster decorations and its tapestries. Art took over in the next room, with Titian’s “St. Sebastian” and a “Penitent Mary Magdalen” where the frame is as much a work of art as the painting. Then through the history and number of examples of Murano Glass 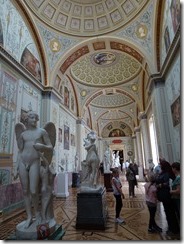 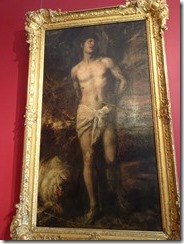 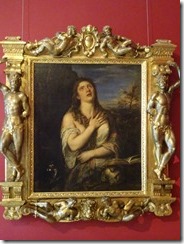 This room contains a copy of the artist’s Vatican mural and is the only non-original in the Hermitage. It is, nonetheless, one of the most incredible rooms, and one of the most impressive works of art in the entire museum. This is followed by a number of true Raphael originals including a “Madonna and Child” that he created (along with the lovely frame) when he was a student, “Holy Family” and Michelangelo’s “Crouching Boy” statue. 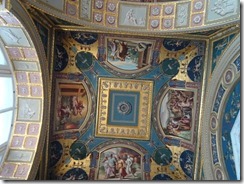 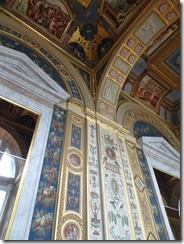 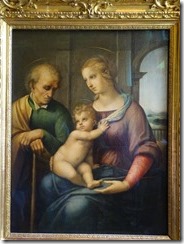 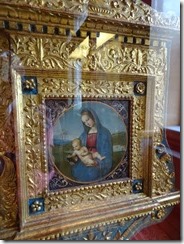 We entered the New Hermitage galleries to be greeted with an amazing Lapis Lazuli table. Since it is far larger than any individual piece of the brilliant blue stone, it is actually a mosaic that uses powdered stone to fuse the pieces in a way that that the tabletop, in all its glory on a gilt base, looks like a single magnificent stone. 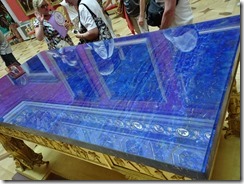 We then toured the galleries of the Bologna Academy (which pioneered Italian Baroque), the Venetian galleries (known for landscapes) and the Italian Sculpture Hall, with works including Canova’s “Three Graces” and the :”Kiss of Cupid and Psyche”. 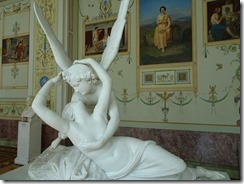 Although only two rooms, this collection contained masterworks of Velasquez, Goya and El Greco, the later in the form of “The Apostles Peter and Paul”. 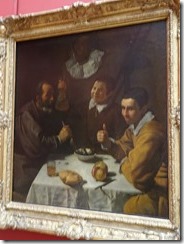 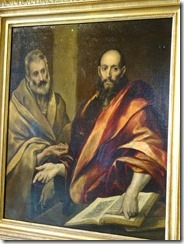 In this room,  artist/diplomat Peter Paul Rubens’ Union of Earth and Water” made an artistic realist’s argument for the union of Flanders and Wallonia and Frans Snyders produced an incredibly realistic series of representations of Belgian markets. 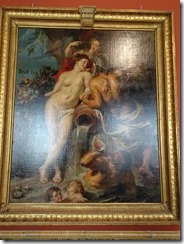 Peter the Great started this collection with a focus particularly on Greek and Roman art. While both exhibitions are extensive, the most impressive piece is certainly the massive Czarina Vase, a roughly 10-foot-by-20-foot dark green bowl that was made of three pieces of Jaspar. The museum also has a small, but impressive Egyptian collection with sculptures, a number of sarcophagi, including some nested ones, canopic jars and the museum’s single mummy. 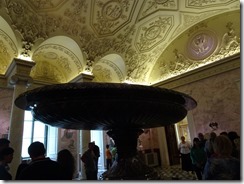 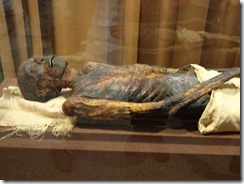 While our three-hour tour covered virtually all departments of the vast, pre-19th century section of the museum and was packed with information, we were in for a bit more exploration. So, we spent about another 90 minutes exploring a number of other sections.

This area included many, many portraits of royal families, suites of additional, fully furnished palace rooms and a “deadly fun” section of imagined ancient weapons created by contemporary metal artists. 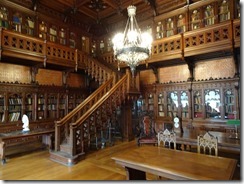 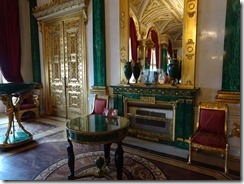 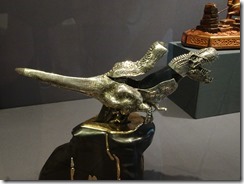 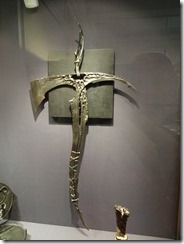 Fashion as an Art

This area contains an exhibit of outrageously beautiful designer gowns 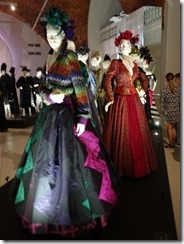 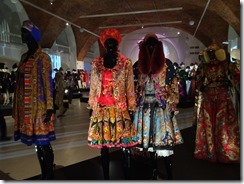 Among the highlights, at least for us, was a massive and frightful Mongolian ceremonial mask that is surrounded by miniature skulls.

While that was enough for a mad, one-day rush through the largest section of this massive and incredibly impressive museum, we had barely scratched the surface. First, while we blazed through all of the museum’s primary sections, we barely scratched the surface of the richness of the collection. Second, and most importantly, we did not even enter another huge building that housed the museums equally impressive collection of modern art. Even if we had time to do this in the same day (which we did not), we were already in severe states of sensory overload. This museum would have to wait for another day, and another tour.