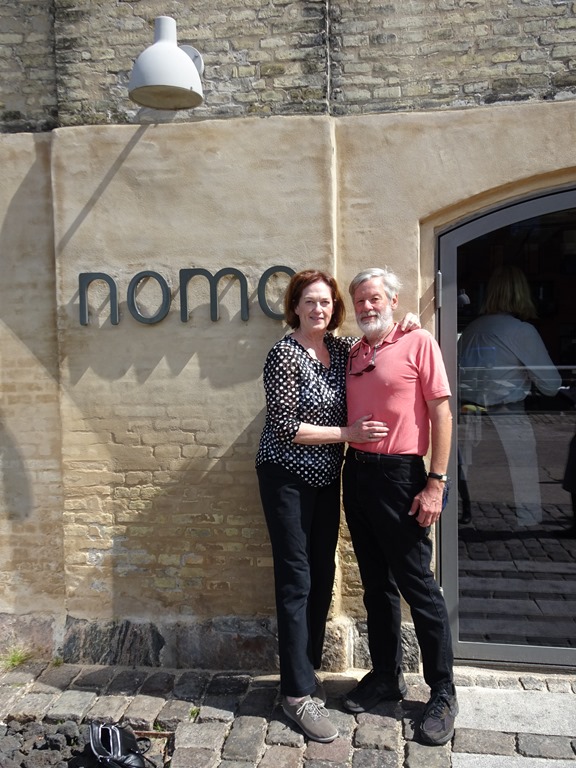 Eating in Copenhagen can be the crown prince, if not the king of world culinary destinations. Noma restaurant, with its ultra-star chef Rene Redzepi, is often number one, or at least within the top five rated restaurants in the world. And as if this weren’t enough, the city is packed with restaurants helmed by other world-class chefs who were trained by Redzepi and other world-renowned master chefs. Let’s start from the crème de la crème.

Noma is as much of an experience as it is a meal. Reservations in the ultra-exclusive twelve-table restaurant are typically booked within minutes of the time they are opened and wait lists are often up to 60 to 80 parties! Being from the U.S., we were sound asleep on the magic moment that reservations opened for the days we would be in Copenhagen. We, however, hit the lottery when one of our eight standby requests (covering every lunch and every dinner for which we would be in town) was accepted. We were so excited that, after a month of travel, we even wore fresh jeans (black, rather than blue) and pull-over shirts—although as it turned out, we were overdressed.

Every guest is greeted by a reception committee consisting of almost the entire kitchen and wait staff. Service is always immediate, friendly, and of course knowledgeable. Chefs verbally acknowledge team leader commands (in almost a cult-like fashion) as a means of ensuring that dishes are delivered to the diner within 20 seconds of the dish being completed. The entire dinner is seamlessly choreographed—every dish arrives exactly when appropriate—with a slight rest between courses during which the paired wines are poured and explained.

Although virtually every dish was delicious, we had some absolute favorites. These included our welcome dish of roasted rhubarb (cut and shaped as a rose) with seaweed that was as artistic as any dish we have had. We also enjoyed a number of our pre-dinner snacks—especially the pickled quail egg wrapped in nasturtium leaves These were followed by 14 additional courses. Among our favorites were chunks of Danish lobster nestled into poached onion leaves in a lavender and rose oil juice, turbot and raw shrimp with lavender and morel broth. Then there was one of the most phenomenal dishes we have ever had—steamed king crab with egg yolk and fermented umami-flavored broth. And, as would be expected, it worked perfectly with a dry, 2015 Schieferstern Purus dry Riesling. And to keep things interesting, how about sheep milk yogurt with a paste of fennel and thyme-fried wood ants with sorrel juice? Or a chocolate-sprayed clump of reindeer moss served with a chocolate-covered cep mushroom served on a bed of moss and stones? 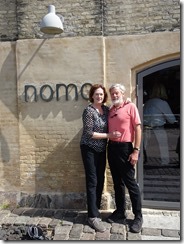 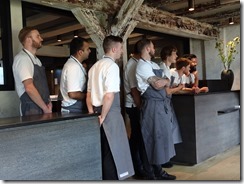 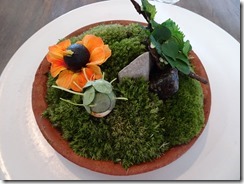 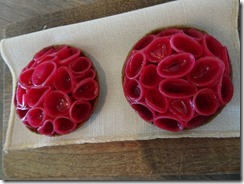 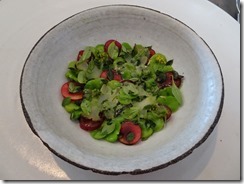 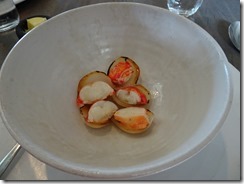 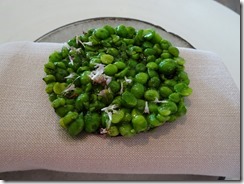 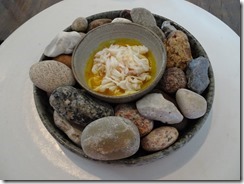 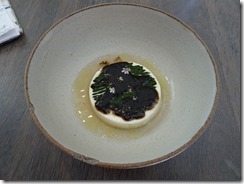 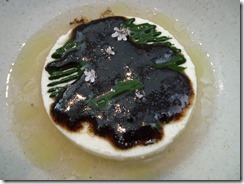 Noma specializes in wine made from small European, organic producers who do not use sulfites. Although we can’t say that any of the paired wines would be among our favorites for drinking on their own, each worked well with the dishes with which they were paired. A couple, such as the Riesling with the crab, were extraordinary!

After a leisurely dinner, we toured the kitchen, where we watched the painstaking and amazingly repetitive routines of preparing produce and preparing dishes such as the rhubarb rose. They explained how each station was organized and how they ensured the timeliness of each dish. We then went outside to see the different fermentation rooms used for each product, and the charcoal grills and then went upstairs to watch a dozen interns tirelessly prep ingredients and where the chef and sous chefs continually propose, experiment and jointly decide which new dishes will make it onto the continually evolving menu. 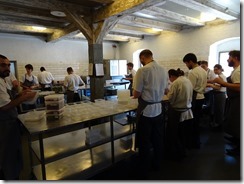 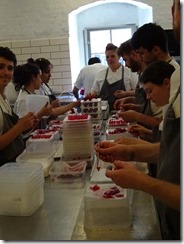 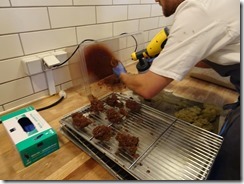 So, was Noma all that it was built up to be? It was absolutely an extraordinary experience of which the meal itself was only a part. The wine, the rustic ambiance, the impeccable service and the aura of a unique experience were almost as important.

We, however, don’t budget $1,000 for too many meals. Although we loved the experience, it is, for us, once in a lifetime. And maybe, just maybe, very over-priced. But, who are we to say. We paid it, we enjoyed it and we will have memories to talk about it.

Copenhagen dining, however, is about much more than Noma. It is also about the numerous other restaurant alumni who have opened their own, often Michelin star restaurants. We ate at two of these:

In our opinion, Kokkeriet deserves more than its single star. This small (only about a dozen table), seasonal restaurant is all about impeccably fresh ingredients, immaculate preparation, innovative presentation, perfectly crafted wine pairings and impeccable and friendly, but never obsequious service. It was an incredible dining experience—one of the best we have ever had and a lot less expensive than Noma. Every dish, from the five pre-dinner snacks, through the Amuse and eight courses were artful, delicious and harmonious with what came before and after. Although we thoroughly enjoyed every dish, we were especially impressed by the braised veal with pickled rhubarb with oyster and parsley broth; and klipfish with fried potato, mustard, thyme and egg yolk. The paired wines, which ranged from vintage Champagne (2014 Taittinger Vintage Brut) to unexpected and quirky (2014 South African Klein Constantia Sauvignon-blanc which was mineraly with a smooth, rounded finish) were not only wonderful on their own, but paired perfectly with the dishes they were intended to support. The ever-present servers, meanwhile, were extraordinarily friendly, helpful and knowledgeable.

Relae is another one-star Michellin restaurant, which focuses primarily on intricate, but simply-presented vegetable-centric dishes. After an Amuse, we did an abbreviated four-course menu (with one additional cheese plate) with a wine pairing. The results were mixed. We enjoyed each of the dishes, with their unusual ingredients and combinations: especially celtuce (an unusual cross between lettuce and celery) with pistachio gel, unripe strawberries and marigolds; lamb with dried leaves and the Danish cheese tart. And there were some unusual touches, like a broth of eggplant juice and basil stems that complemented an eggplant and basil dish. Overall, however, none struck us as being anywhere near as inspired or complex as any of the dishes at Kokkeriet. The paired wines, although some did work nicely with the dishes, were generally uninteresting and none were even remotely interesting enough to drink on their own.

This, however, is not to suggest that each of our Copenhagen meals were at Michelin-starred restaurants. We also had some regular a la carte meals; one consisting of two small dishes from two very casual places.

Fleische is located in Copenhagen’s Meatpacking District which, like that in New York, is becoming gentrified with restaurants and bars. Some butchers are being forced to move out. Others, such as Fleische are adapting quite well to these changes and joining the party. Casual and primarily small plates, the meat dishes were, as we expected, both very good: beef tartare with marrow and chips plus venison with chanterelles and green strawberries. We were also very pleased with the lightly-fried softshell crab with chili mayo accompanied by heart salad with the nice addition of slightly crunchy, immature green peach seeds (harvested young, before they form a shell). Although the wine list was sparse, the Chianti Classico worked for us.

Toldboden is a fun, casual, waterside place with a lively crowd, loads of outside seating and from our limited experience, very mediocre food. The cod ceviche consisted primarily of spring onions, and the “lobster hot dog” turned out to be a tiny lobster roll where the miniscule amount of lobster was subsumed in masses of mayo and spring onion. But while we were so disappointed that we decided to eat another lunch at another restaurant, the other patrons seemed pleased enough with their meals.

Smushi is where we planned to go before we discovered and decided to try Toldboden. It turned out to be the restaurant at which we had our real lunch. Located in a charming courtyard of tall, Dutch-style buildings, the restaurant is more of a Danish pastry shop than a restaurant. It does, however, offer a reasonably good selection of open-faced sandwiches where we had two (liver pate with bacon and roasted onion; and egg and shrimp with mayo and watercress) with a Chablis and an IPA (Ugly Duck). However,  we did have one major disappointment with our Smushi experience—we were not able to partake in any of the very tempting pastries.

This is one of Tivoli Gardens’ 40 different eating establishments and 20 restaurants. After an amazing, three-hour lunch at Noma, we were looking for a light, casual dinner of small plates. And since we were in Tivoli Garden’s anyway, the modernist, French-inspired brasserie with an outside terrace overlooking the gardens and the rides was perfect. Although Tom managed to misplace his notes on our dinner, we do recall we weren’t especially impressed by the food. We, however, were their primarily for drinks and an opportunity to enjoy the atmosphere. This did not disappoint.