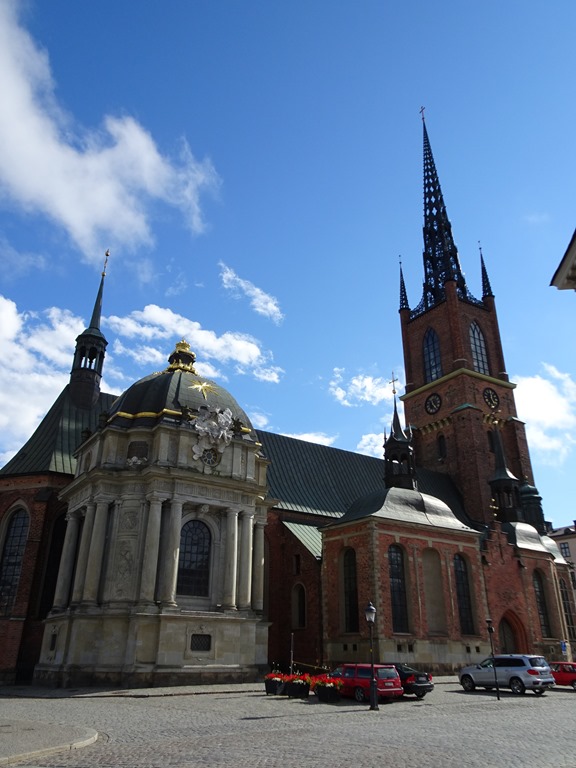 As we continue to explore Stockholm Sweden, we hit Riddarholmen Island. Just as the King, Queen and their children lived in Gamla Stan’s Royal Palace, the city’s lower ranking aristocracy needed a place of their own to live. Today, no one lives on the island. Still, it is filled with buildings which are owned by and used for government offices– except one: the Norstedts Publishing House . While one current government building (a Court of Appeals) used to be used as a Royal Palace, there is currently only one historic building that is still open to the public.

This 13th century monastery church that is now a museum. This church is notable for two primary reasons. First, it is the oldest surviving church and monastery in the city. Second, it is the burying spot for almost all Swedish monarchs since King Gustav Vasa. While the church itself is almost 700 years old, the unusual open-latticed iron steeple, which replaces a previous one that was destroyed by fire, was constructed in 1834.

The real history, however, is inside the church, which in addition to containing so many grand royal tombs, was also home of the elite Order of the Seraphim, with painted copper plates of, and in some cases, the original shields that denoted the honor. While many of the royal tombs are located in their own chapels, two are displayed in front of the alter. Some of the most refined artistic, not to speak of the most valuable (cast in gold and silver) of the coffins are in the burial crypt. And speaking of gold and silver, there is also the molded, hammered and chistled silver chandelier that was created in memory of Karl X Gustav. 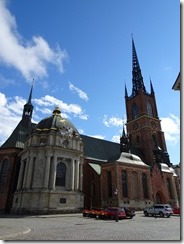 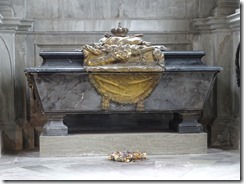 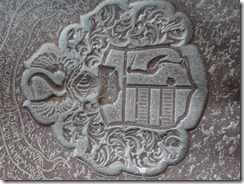 Another island, also included in Gamla Stan, is Helgeandsholmen. This island was and continues to remain the site of the country’s Parliament and now, a museum that displays the relics discovered during a renovation of the land beneath the legislative chamber.

The Parliament Building occupies a 130,000 square meter structure that contains two structures: an older structure with two chambers and offices to accommodate what was, until 1971, a two-chamber legislative arm; and a modern new chamber to accommodate the 349 members that have since been merged into a single body. We took a tour of the building, which began in the new chamber and learned about the unusual composition (nine parties with none generally having a majority) and rules of the parliament. For example, the Speaker, who has even more power than the Prime Minister, has to resign from Parliament in order to serve, and another leading party member is selected to take the speaker’s place. And, in an unusual courtesy, when one member has to miss a vote, a member of the opposition abstains so as not to affect the results. 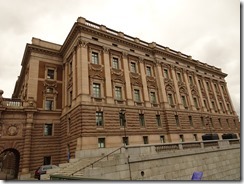 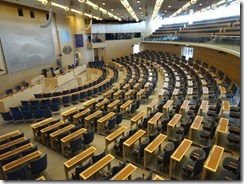 The older, more traditional sections of the building are the prettiest. This is especially true of the Old Council Room, which was used from 1866 to 1971, and is now used primarily by the largest party for its own party meetings; and of the Grand Gallery, which originally connected the two chambers of the original Parliament. The Gallery is especially notable for its incredible blue glass dome and some of the non-traditional-style portraits of previous speakers. 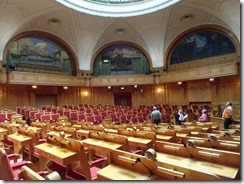 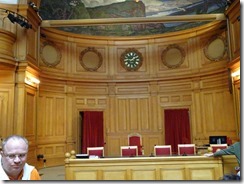 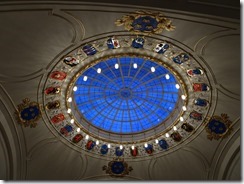 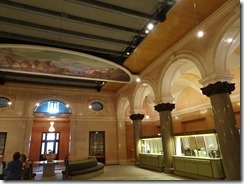 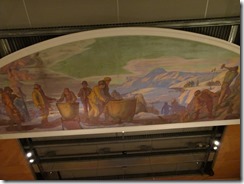