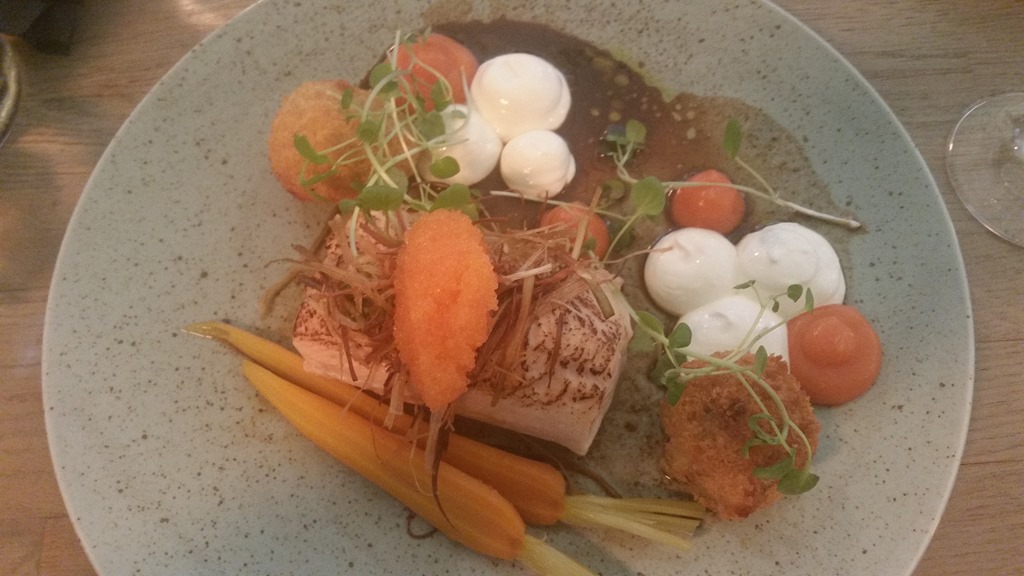 Our time in Goteborg Sweden was short. As such we only had a chance to eat at 2 Goteborg restaurants.

Fiskekrogen, is one of the city’s premier stops for its local food—West Coast fish and shellfish. We settled for an abbreviate sampling of three of the restaurant’s local dishes: a creamy lobster bisque with lobster mousseline, asparagus and carrots, blue mussels steamed in a very good, very rich white wine cream sauce, and another very good, more unusual dish, langoustine tartar covered with a layer of smoky, grilled sweet corn hay foam with dried monkfish caviar. Although we were less than impressed with the service, we enjoyed the food and, of course, the wine—another Chablis, this a 2014 from Domaine Pilson.

Siobaren, another local seafood institution, was in the Haga district. We shared three dishes and a bottle of wine. We began with fish roe, which was accompanied with almond potato cream cheese and bread pudding (although we preferred our roe straight). Entrees were pan-fried cod with beurre blanc, potato puree and onions. While good, we both preferred our other entrée; a big slab of grilled char with roe, smoked sour cream, herbs, carrots and potato croquettes. Wine was a 2015 Gruner Veltliner. All in all, a good place to eat. Get reservations in advance.

We stayed at the Avalon Hotel, which was a 10 minute walk from the train/bus station and was across the street from the Saluhallen food hall. It was walkable to all of the normal things you would want to see. And if you didn’t want to walk, Goteborg, like most European cities, has a great transportation system. Good breakfast (included in rate). Wifi was excellent. No complaints