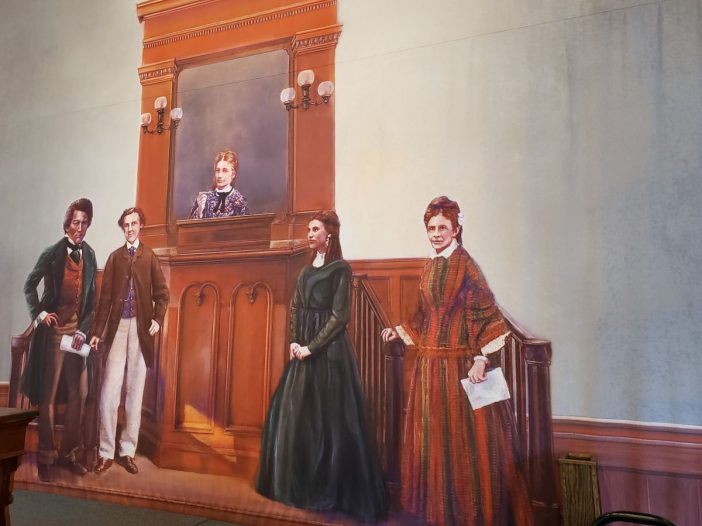 Seneca Falls is another pretty town in Central New York. It is situated on a river that used to be home to several mills. It is also home to another human rights cause—the equality of women. The city is now home to a number of monuments to this heritage:

It is amazing that we lived in the area for so many years and never visited this historic park.

Seneca Fall’s Women’s Right National Historic Park’s visitor center tells the story of the first Women’s Rights Convention held in Seneca Falls on July 19-20, 1848. A movie and exhibits explained the history, the accomplishments of, and some of the current challenges faced by the women’s movement.

The conference and the declaration were widely condemned and ridiculed resulting in a number of the initial signatories removing their names from the document. But it did raise visibility around the issue of women’s rights. A small but growing number of community and political leaders began to support the movement. The conference led to numerous newspaper articles and even the creation of some newspapers dedicated to the cause. This local convention was followed by a series of annual national conventions.

Although less comprehensive and somewhat less educationally focused than other National Historic Parks we have visited, it does provide a nice overview of the women’s rights movement. The movement was modeled after the Declaration of Independence and declared that “All men and women are created equal”. It laid out many of what the participants saw as the requirements for equality. These include many rights that were prohibited under most state laws including the rights to:

They also demanded full access to universities, only two of which then admitted and allowed women to earn Bachelor’s degrees, much less advanced degrees.

The suffragette movement began to take hold after the Civil War when leaders including Elizabeth Cady Stanton and Susan B. Anthony narrowed their goals from gaining full equality to the objective of gaining the right to vote. Women’s Suffrage, they reasoned, would lead to women’s participation in government and the creation of laws that would provide other rights they desired.

The movement suffered a number of setbacks along the way, including a break with their traditional Negro Rights partners and a split of the women’s movement into two factions. One group continued to aggressively pursue national rights. Another group favored more modest objectives, such as gaining voting rights on a state-by-state basis. The groups eventually reunited. By 1920, they obtained their goal of universal suffrage.

By then, however, different women’s groups had taken leading roles in other campaigns, such as abolition, anti-lynching, civil rights, temperance, and later, contraception. Although many of these did achieve some level of success, the overriding objective of complete women’s equality officially failed in 1982 with the defeat and abandonment of the Equal Rights Amendment.

Even successes, however, did not always lead to the intended results. Customs (such as women’s role in the home), myths (such as their inferior intellectual and athletic abilities), and even traditional conceptions of beauty (which lead to unhealthy perceptions of desired weight and the wearing of constraining shoes and clothes) perpetuated. Even the success of the suffrage movement in the 1920s did not necessarily lead to the desired results. By 1990, for example, women accounted for only six percent of all elected officials! Many of those who work outside the home are concentrated largely in female-dominated professions (such as nurses, teachers, data input clerks, administrative office workers, etc.).

Despite all these setbacks, successes have been many. While these were partially due to the right to vote (such as the need to cater to a growing role of women voters) other advances were attributable to such varied factors as:

A handful of women were doctors, lawyers, and ministers as early as the 1890s, Now, women equal or exceed the number of men in law schools and medical schools and have proven themselves in jobs including astrophysics, astronauts, U.S. Representatives, and Senators, Governors and U.S. Supreme Court Justices. They are carpenters, plumbers, race car drivers, and now even a Vice President of the United States. Women now serve not only as combat soldiers and officers but also in Special Forces units and the highest levels of the Pentagon and Department of Defense.

But for all their successes, women, as the exhibits point out, still face many obstacles. These include not only customs, perceptions, and predispositions. Active discrimination still exists among co-workers, hiring managers, and superiors. While the Me-To Movement has helped to draw attention to these issues, they still exist. Too many women are still subject to unwanted sexual demands in the workplace.

And even when women do obtain and retain their jobs, they are often paid less than 75 cents for every dollar made by men in most comparable jobs. Even women who make more money than their husbands or partners are still often expected to shoulder the majority of household and child-rearing responsibilities.

Although much progress has been made, the journey is still in progress.

The park is built on an abandoned railroad bed that runs next to the Seneca-Cayuga Canal. This pretty 0.9 mile trail begins with a series of statues and busts of women, most of whom played a role in the growth of the city.

The Seneca Falls area is also home to many Amish communities. You often see horses and buggies instead of cars on the roads. The area has a number of Amish grocery stores and furniture stores that are interesting to visit.

We stopped at the locally owned Sauders Store. It is more like an old-fashioned country store but it is huge at 40,000 square feet. The locally owned fruits and vegetables are delicious and the selection of grains and confections is awesome. And it even has a book section replete with multiple versions of the bible, a number of inspirational children’s books, and even a number of “Dick and Jane” readers. It is interesting to explore and to find unusual products as well as almost anything you need. The furniture store, meanwhile, was stocked with a range of handmade outdoor furniture—especially Adirondack and other chairs.

Seneca Falls is more of a day trip for us but we did need to find a place for lunch. Many dining spots were not open on our Monday visit in June 2022. We finally found Gould Restaurant. Our non-memorable lunch included a BLT salad and burger with swiss cheese, avocado, and bacon from the limited menu.