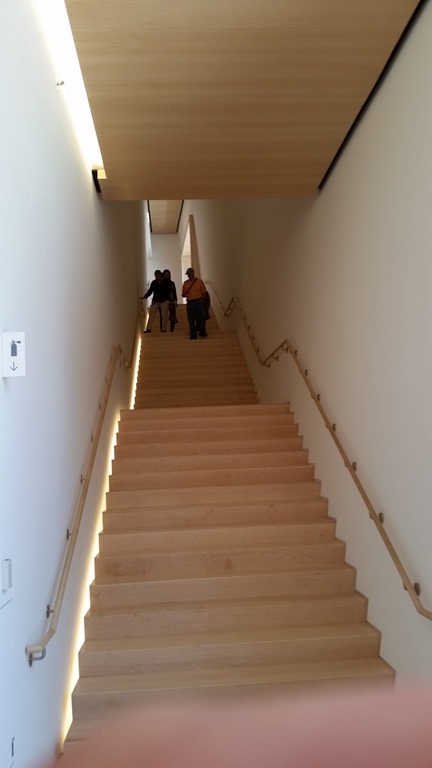 San Francisco’s modern art scene has been eclipsed by the five years of dusk resulting from the closure and reconstruction of SFMOMA. The much anticipated May 2016 reopening has not only lifted the pall, but has also exposed an innovative new design for museums and provided the public with access to the incredible Fisher Collection.

Although the front of the building and entrance have remained the same, much of everything else is different; from the sleek main stairway and its giant Calder mobile, to the publically accessible Howard Street entrance that allows anyone to experience the art of conceptualist Sol LeWitt and especially Richard Serra’s grand, 400-foot, 214-ton “Sequence” rusted steel sculpture. The beauty and the drama of the new building become even more evident as you go through the museum, experiencing its many outdoor spaces and sculpture gardens and the drama of gradually narrowing, window- and skylight-illuminated staircases that connect the upper floors.

And then there’s the exhibition space itself—all 170,000 square feet of it—nearly three times that of the original museum and larger, even, than New York’s MOMA. All of this space now holds a collection of 33,000 pieces, including more than 1,100 from Donald and Doris Fisher, a collection that provides particularly strong representation of masters including Alexander Calder, Ellsworth Kelly, Anselm Kiefer, Sol LeWitt, Gerhard Richter, Richard Serra, and Andy Warhol.

Although the building is certainly large, lovely, innovative and inviting, we were, of course, there primarily for the art.

We began our exploration on the second floor, the primary lobby, and a dozen galleries that contain many of the highlights of the museum’s original collection. Entry into these galleries makes one feel right at home, with some of the initial galleries, in particular, containing many of the same works, hanging in many of the same places as in the old museum. You enter, for example, into the French room, where you are face-to-face with Matisse’s wonderful “Woman with a Hat”. This is surrounded with works by Picasso, Bracque and others, and a special exhibit of small-scale Paul Klee prints. Then, into the North American gallery, where you are confronted by the same Diego Rivera “Flower Carrier” photo, and an intro to American Modernism. 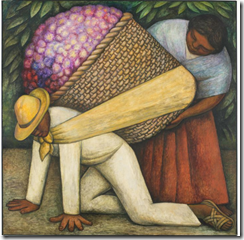 The galleries then lead to exhibits of prints, a somwhat eclectic gallery that explores very different representations of the human form, such as Edward Hopper’s portrait of isolation in a movie theater and Robert Arneson’s quirky sculptural self-portrait., “California Artist”.

We then began a journey into the Surreal (Dali, Duchamp, Magritte, etc.), the abstract (with examples of gestural and chromatic Abstract Expressionist works from artists including deKooning, Motherwell, Rauschenberg, Rothko and especially Clifford Still), Pop (Warhol, Johns, Lichetenstein, et al), Symbolism and Conceptualism.

The Third Floor is devoted largely to photographs, including an extensive section, “California and the West, devoted to a celebration of (and in some cases, an indictment of) the American west. Photos by Ansel Adams and Edward Weston highlight some of the region’s expansive and dramatic beauty. Dorthea Lange and Jim Goldberg, in contrast, provide intimate portraits of some of the victims of the rush for the Great American Dream. Another depicts a despoiled Southern Californian landscape clogged with hundreds of oil and gas derricks. Then there are pictures of California personalities, including Bobby Seals (Black Panthers) and Patty Hearst (as represented in 26 Dennis Adams’ photos).

Another photo gallery goes back to the origins of documentary photography with a series of George Bernard’s pictures of the death and destruction of the American Civil War.

On a more whimsical side, there is Alexander Calder’s “Motion Lab”, a display devoted to the Fisher’s collection of Calder’s mobiles, stabiles, wall sculptures and one mobile that balances precariously on the edge of a table. It begins with the engineer-turned-sculptor’s initial experimentation with wire sculptures, with his “Aquarium” bringing back wonderful recollections of an extensive display of his wire Circus sculptures that we recently saw at a New York gallery. Three of the artist’s stabiles, meanwhile, are presented just outside the gallery, including in an adjacent sculpture garden where the wall serves as the garden.

A docent, in a gallery presentation, provided an overview of the artist’s progression across these different approaches to sculptural representation, his original debt to Mondrian (for suggesting the power of geometric shapes in art) and his incredible body of work—a total of 16,000 pieces, or the equivalent of about one per day for 50 years!

The fourth is the first of three floors dedicated almost exclusively to the Fisher Collection. Its primary exhibit, “American Abstraction”, provides something of a retrospective of the American Abstract Expressionism movement, at least within the context of the artists for whom the Fishers (who built the entire collection on their own, without the help of professional curators) had a particular affinity.

The exhibit demonstrates and briefly explains the progression of the movement, its incorporation of different types of media and the two primary forms of Abstract Expressionism:

Then there is the contemplative, almost mystical effect of Christopher Wilmarth’s metal and glass “Days of Blue” sculpture.

The floor also contains a number of other, smaller galleries. Two, for example, are devoted to smaller-scale works by Serra, including “Gutter Corner” in which he and his assistants spread molten lead at the intersection of horizontal floors and vertical walls, let them dry, and then arranged the resultant metallic masses in a row. Other galleries have small displays of media art, experimental architectural designs and one of about a dozen avant-garde chair designs, none of which appear to be particularly inviting. Another is devoted to a series of Diane Arbus’s sociological photos that paint intimate and touching profiles of people with developmental disabilities.

The fifth floor is devoted primarily to the Fisher’s collection of Pop, Minimalist and Figurative Art, with particularly strong representations of Andy Warhol and Chuck Close. You are appropriately welcomed to this exhibition by Claus Oldenberg’s apple core, with things getting more funky from there. There are works by Oldenberg, Lichtenstein, Philip Guston, Jasper Johns, David Hockney and more. Nor can one forget the ever-popular, hyper-realistic sculpture of Hanson’s policeman that greets guests who are about the ascend the stairs.

There are, however, three primary stars of these galleries:

The floor also has a few sculptures from artists including Picasso, Giacometti and David Smith as well as a separate section, in an open atrium by the museum’s tower, that is dedicated to British sculptures, including Antony Gormley’s intriguing Cosmic Cloud (is the man at the center in the process of forming, or bursting apart?) and a reflective black disk in which Anish Kapoor provides illusions reminiscent of those of his Chicago “Cloud Gate, better known as “The Bean”.

The primary exhibition is a corollary to the fourth floor’s exhibit of American Abstractionists—this one devoted to their German counterparts. It is devoted primarily to the works of Gerhart Richter (from his realistic through his abstract stages) and Anselm Kiefer (both his wall compositions consisting of all types of found materials and a couple of his sculptures).

Other highlighted artists include Sigmar Polke and Bernd and Hilde Becher, with their photographic series of water towers, cooling towers, gas tanks and other structures.

This floor also has another exhibit, titled “Typeface to Interface” that provides an overview of the evolution of typefaces, from that produced on printing presses, typewriters, IBM Selectrics and computers, the devices on which they were created, and the changing ways interfaces) through which people can produce these images.

The small top floor includes one of the museum’s largest displays of videos, a display of a few Cindy Sherman self-portraits, and a number of examples of so-called “kitch” art. These include Jeff Koons’ Inflatable flowers, Marcel Duchamp’s fountain, Brad Kahlhamer’s “Super Catcher” wire sculpture, a realistic aluminum sculpture of a person sleeping on bench, and other pieces by artists including Richard Prince and Ai Weiwei.

And Should You Need a Break

And since one does not live by art alone, there are also three options for food:

Since In Situ is not yet open, Tom had a fast, scenic and very good lunch at Café 5, where he enjoyed a very nice al fresco lunch of a fried chicken baan mi with Asian coleslaw and cilantro, with a glass of Talbot Pinot Noir.

Given the large scale of the museum, the range of styles that are represented, the number of works that are on display and the gradually increasing number of docent presentations, SFMOMA is too much to take in in a single visit—especially for first time visitors. We broke our initial explorations into two days. Both long, but both very rewarding and well worth a new membership.