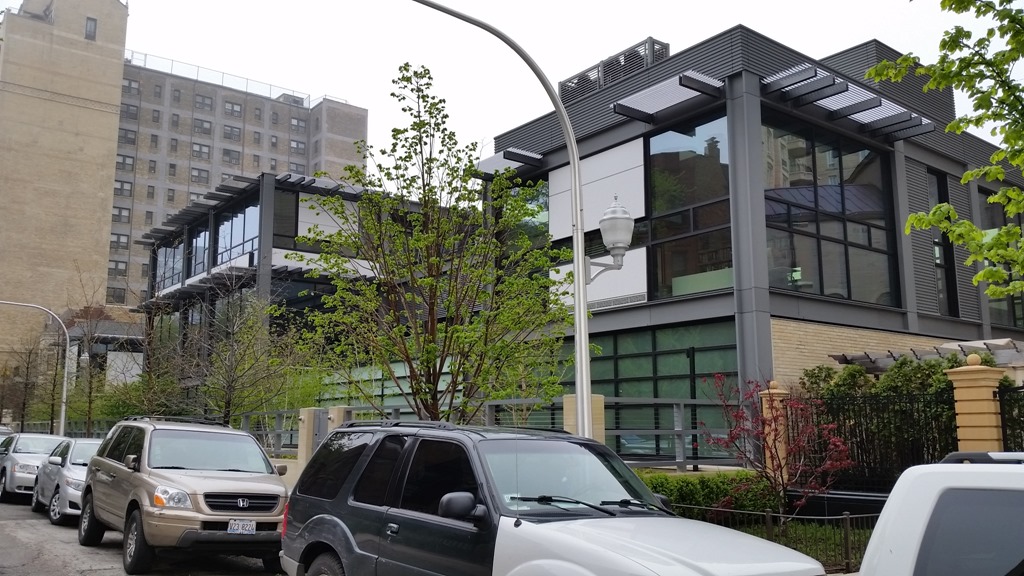 Our last Illinois stop on this trip was to our very old home Chicago–a city that we try to visit every couple years. Since we have already written and provided pictures of many of the neighborhoods and sights that we normally visit, we won’t repeat it all here. Instead, we will just provide an overview of some of our new experience, such as a new Steppenwolf Theater company play, a current Art Institute of Chicago exhibit and of course, visits to a number of new restaurants.

As usual, we walked from the moment we got to the city, to the moment we left—except for the time spend eating at restaurants and exploring the Art Institute of Chicago. These walks included those around Loop Art Trail, SuHu (Superior/Huron Streets) galleries, the Old Town Triangle, North Halsted Street, West Loop area around Fulton Market and the Randolph Street restaurant corridor, and the totally redeveloped area around Clyburn and Halstead Streets and North Avenue. This area, which used to be a virtual no-man’s land when we lived there, is now filled with upscale store including Apple, Crate and Barrel and Sur le Table. We walked around Logan Square, the Near North, Lincoln Park and the Lakeview area in which we used to live. Although this area has long been home to a number of historic mansions among the high-rise condo towers, we were amazed to see two huge, ultra-modern mansions within a block of our former home.

And we revisited a few of our favorite buildings, such as the one that used to be the First National Bank of Chicago Building (in which Tom used to work), the Hancock building (of which the 96th-floor Signature Lounge our favorite spot for drinks) an the undulating, wave-like Radisson Blu tower.

Among our special Chicago stops were:

We attended Steppenwolf Theater’s production of Mary Page Marlowe. Which decisions do you actually make, and which just seem to happen? Over which aspects of your life do you actually have control? What is control, anyway? Over which of your decisions and actions should you assume responsibility? And what does love have to do with all of this, anyway? These questions are all asked, and left largely to you to answer in this wonderful, though-provoking and very elliptical play by Tracy Letts, the playwright of the Broadway hit, August: Osage Country. The play is presented as a series of out-of-order vignettes from the life of Mary Page (or sometimes just Mary, with the protagonist played by different actresses during different stage of her life. The questions are so profound provocative and the answers so situational that it had us thinking and talking about it all the way back to the hotel.

The Art Institute is one of our favorite art museums and the first place Tom came to appreciate art. It has a special place in our hearts. We went through all are favorite galleries, and a number that we don’t typically visit. We were reacquainted with many of our old favorites (especially from the Modern European, Modern American and Impressionist galleries (especially some from Picasso, Chagall, Magritte, Sargent, Hopper, Monet, Renoir, Seurat and Caillabotte) and discovered many new pieces from artists including Warhol, Matta and Cindy Sherman and a fun portrayal of a woman with her poodle from Katherina Fritsch. Like a wonderful afternoon with old friends.

Our only regret—we just missed a special exhibit of “Van Gogh’s Bedrooms that closed the day before, with three different versions of paintings of his iconic bedroom in Arles, along with a number of other works.

OF course, food always plays a large role in our Chicago visits.

GT Fish and Oyster, is where we had a multi-course lunch. Although the oyster po’boy sliders we initially received were small and terribly overcooked, the manager more than compensated by replacing them with a new order of huge, perfectly cooked oysters on brioche. This was followed with fried smelt and a very good, very reasonably priced three-course prix fixe lunch with soy-marinated tuna poke, tuna BLT, clam chowder and key lime pie. And for those who want a bit more zing with their meal, a choice of three of the chef’s own hot sauces—burn, scortch and smolder.

Boka is a restaurant to which we had been a number of years before. This time, we began with an amuse bouche of beet soup with buckwheat, accompanied by salmon skin chips. This was followed by a rather disappointing seared foie gras with sunchoke puree and Meyer lemon caraway and two orders of nice butter poached Maine lobster with carrot, pecan and a too small dab of lobster bisque sauce. We had these with a bottle of 2013 William Fevre French Chablis. Overall, a pretty good, but less than compelling meal.

Fat Rice, was new to us. It is a Malaysian/Portuguese street food restaurant with many unique dishes. We had two of the restaurant’s specialties: Piri Piri Chicken is a delicious half charcoal-roasted chicken smothered in mild tomato-coconut peanut sauce; Nasi lemak is a coconut rice dish with tea egg, chili sambal, toasted peanuts, fried anchovies and greens that is served with one of several protein options. We selected minchi, which is a pork and beef mixture. All are mixed together (with optional addition of the restaurant’s own hot sauce) into a very nice, savory, moderately spicy mixture. The food was very different from what one normally finds and very good.

Parachute is a Korean/American restaurant with a menu filled with unusual and interesting dishes. We sampled four of them on our visit. Our two starters were a baked potato “Bing” bread stuffed with bacon and large pieces of scallion, and deviled egg stuffed with smoked eel and topped with panko crumbs. We then had two larger dishes. Maeuntang is a moderately spicy hatch chili broth with yellowtail snapper, littleneck clams, enoki mushrooms and ramps, into which you mix rice. (flavorful, but not especially interesting), The standout was a bowl of udon noodles with Dungeness crab, guanciale and fava beans in a rich, creamy sabayon sauce—delicious. We asked the wine manager for recommendations of a wine with these dishes. He selected—and we are glad he did—a Loire Valley wine with which we weren’t familiar; 2014 Le Briseau Patopon Pinot d’Aunis, a relatively light-bodied chenin noir with strawberry, acid, pepper and a bit of tannin.

Ocean Cut, is a seafood specialist that has one of the largest and most interesting fresh fish (on ice for all to see) selections we have ever seen (not to speak of a wonderful tropical fish aquarium). Our lunch, however, was more prosaic. We began with octopus a la plancha with shaved fennel and Calabrian sauce viege, followed by two main dishes—branzino with lemon vinaigrette and a lobster burger with aiolia. Then came two desserts—key lime pie and guava ice cream. Although the lobster burger had plenty (5.5 oz) of lobster and no fillers, the taste was masked by the bun and the aioli. All other dishes and the service, however, were wonderful. Definitely a keeper.

The Blanchard, is a French bistro and winner of the Chicago Critics Award for best new restaurant. The critics will get no arguments from us. We began with one of four foie gras offerings (crusted with black truffle with candied lavender Madeira sauce and truffle essence) with a glass of Sauterne, followed by broiled Alaskan halibut with potato puree, pickled apple, celeriac and chervil pesto, and rack of lamb potato gratin, with eggplant caviar and lamb jus. Dessert was a cheese plate with Bayley Hazen Blue and a soft Oma cow’s milk cheese. This was with a bottle of 2009 Haut Medoc Cru from Chateau Larose-Trintanden. All was wonderful except for the initial instantiation of the halibut, that was far too salty The replacement, however, was quite good.

What a disappointment. We have stayed at the Talbott Hotel multiple times and wanted to stay here again. Joyce made a reservation directly with the hotel months in advance. Then the day before our arrival, we got an email telling us they were oversold and we were being transferred to their sister hotel, The Thompson. In other words, why plan ahead? And why book directly with the hotel? We could almost understand it if we had booked through a third-party which took its 30% booking fee, but no, we didn’t.  In all of our years of travel, this is the first time this has ever happened to us. OK, so we tried to make the best of it. The room itself was a decent size for being in the city and was comfortable, but it wasn’t The Talbott. And, they scent the lobby with a very strong cologne smell. Not sure whose brilliant idea that was. Bottom line: we were very disappointed and will be very hesitant to book at The Talbott again. Maybe it is back to one of the Kimptons which is another favorite “chain” of ours. Or maybe we will try The Talbott one more time as they promised a significant discount if we try again. We’ll see.