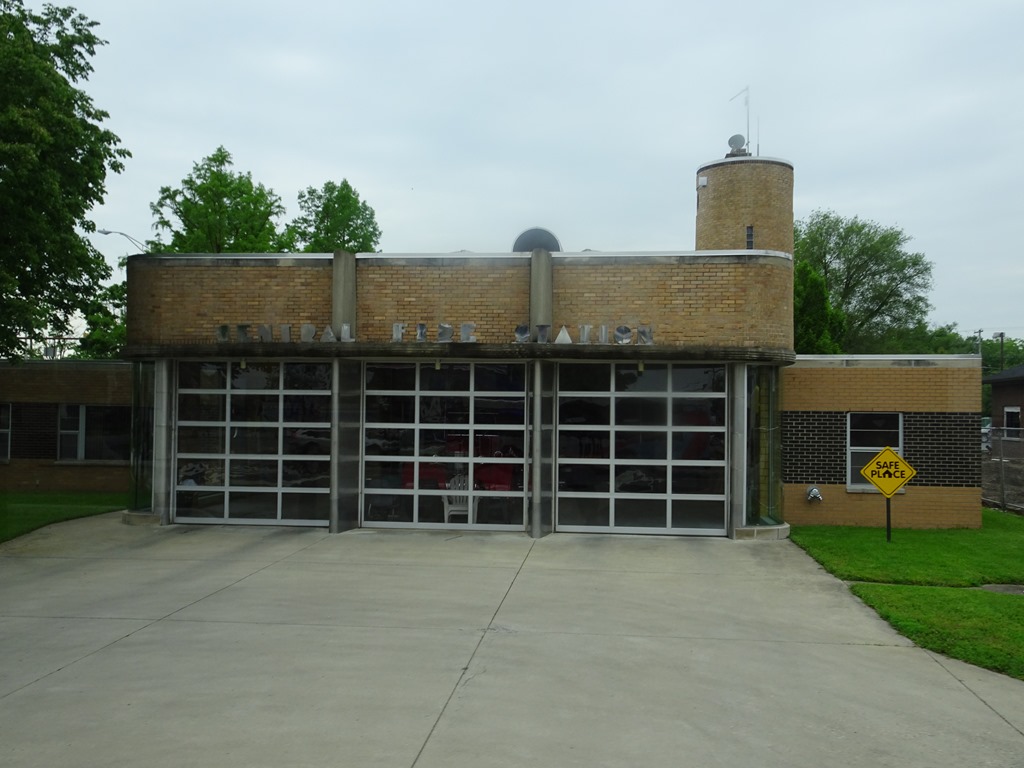 How did a small, 45,000-person town in southern Indiana attract most of the world’s leading architects, landscape designers and artists to design about 50 world-class buildings, parks and public art pieces? And how did this city ever pay for such masterpieces? We had been here many year ago and wanted to refresh our memories as to how and why this town came to be  a star architectural attraction.

The story began in the 19th-century with the Irwins, a local banking family whose chauffer, mechanic and amateur inventor became fascinated with the prospect for diesel engines—a German technology that was generally considered too bulky, expensive and complex to be suitable for commercial vehicles. The family encouraged and funded the chauffer’s experimentation and funded the creation of Cummins Engine. After years of work, the company demonstrated the viability of the technology and began marketing its engines for use in trucks. The power, reliability, economy and durability of the engines improved and the company established itself as a leading provider of these engines just as the growth of the interstate highway system and rapid growth of overseas markets led to an explosion in demand. The company prospered under the leadership of J. Irwin Miller, great-nephew of the banker who funded the initial development.

Miller, however, was more than an industrialist. He was also a visionary, a community leader, a lover of art and architecture and a philanthropist who persuaded a friend—the mid-20th century international style architectural pioneer Eliel Saarinen—to design Columbus’ First Christian Church. Miller then expanded his quest to attract world-famous architects to the city by creating the Cummins Foundation and a program by which it would pay all architect fees for new Columbus public buildings and parks. The company and its executives, meanwhile, commissioned their own leading architects to design company buildings and their own homes. Other corporate executives and community leaders did the same.

This created a practice and a civic pride that continues today and has resulted in a virtuous cycle by which leading architects, landscape architects and artists compete to create and display cutting edge works in the city, the Foundation, the city and corporate executives, fund development and citizens embrace and support the work that ranges from art Deco (city Fire Station #1) to post-modern (Republic Newspaper Building) to contemporary (the new Columbus Commons Building) to a dramatic bridge that frames an entry into the city (East Fork Bridge). 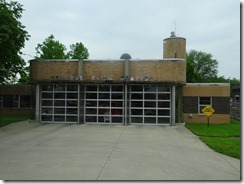 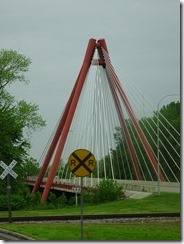 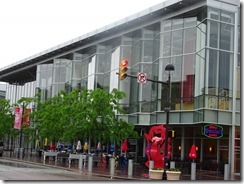 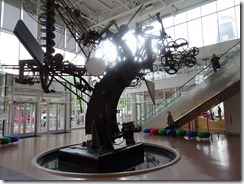 The city, meanwhile, has another program by which leading artists are granted space to show their works for two years—during which citizens decide whether the city should fund purchase of the art. 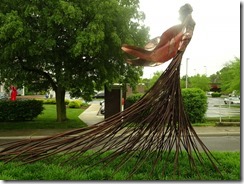 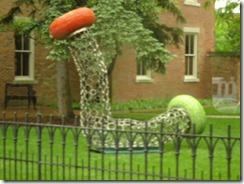 Today, the city is graced with stunning buildings (from churches, to jails, to corporate offices and homes) by architectural legends including Eero Saarinen, Eliel Saarinen, I.M. Pei, Harry Weese, César Pelli, Phillip Johnson, Robert Stern, Skidmore, Owings & Merrill and many others; by public art by artists including Henry Moore, Jean Tinguely and Dale Chihully and with public spaces, corporate grounds and city parks by dozens of prominent landscape artists. Following are a few examples of those that were seen and discussed in one of the architectural tours sponsored by the city’s Visitor Center, follow: 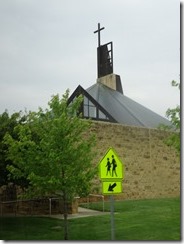 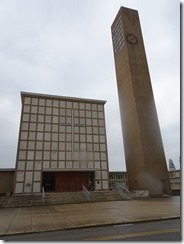 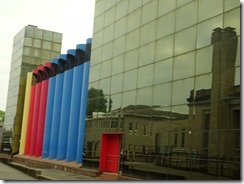 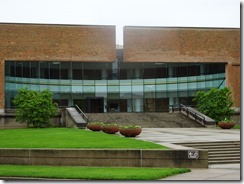 This, however, is not to suggest that the entire city is a “modernist ghetto”. These modern buildings are interspersed in a city that continues to be graced by dozens of well-maintained (and in some cases, greatly expanded) historic buildings. These include, but are certainly not limited to the turn-of-the century main street strip (along Washington Street), the beautiful County Courthouse, the Civil War-era home turned Visitor Center, and the luxurious 1910 Edwardian Irwin family home and Italianate garden (now the Inn at Irwin Gardens). And then there’s the incredible Zaharakos Ice Cream Parlor and Museum, the exquisitely restored 1900 candy shop, soda fountain and ice cream parlor with its stained-glass windows, Tiffany lamps, hand-carved soda bar, vintage soda fountains and its fascinating 1908 “Welte Orchestration” (a multi-instrument cross between a multi-piece band, a player piano and a jukebox). 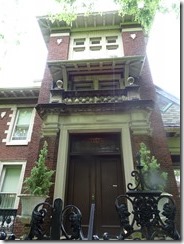 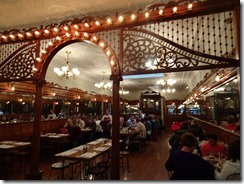 All combine to form one of the prettiest, most cosmopolitan and most historic small cities in the country—a city that among its other honors, has been designated as:

Although we struggled to find a credible Sunday afternoon lunch in downtown Columbus, the restaurant at the pretty, contemporarily-designed Hotel Indigo architectural center and art hotel worked for us. While the chef of the new restaurant warned us that the kitchen was not yet fully functioned and currently relied largely on warmed-up partially-cooked food, she did guide us to the wild Alaskan salmon that was cooked from scratch. We ended up with the herb-crusted salmon in two dishes: one with sautéed wilted kale and wild mushrooms and another atop a Caesar salad, both of which were quite good (other than for the excess of dressing on the salad).