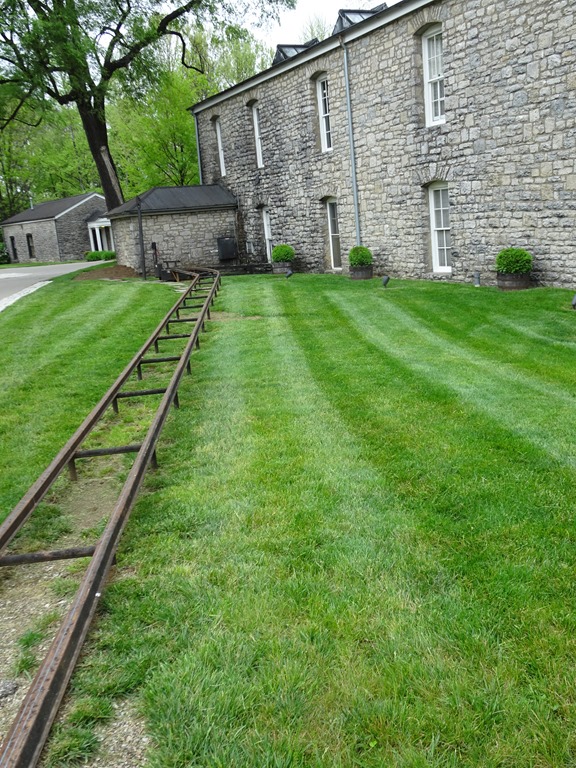 We signed up for and received a fascinating and comprehensive overview of one of the handful of the more than 2,000 19th-century (built in the 1880s) bourbon distilleries that (after a Prohibition-era closing), continues to operate and prosper.

The tour began in the beautiful distillery building, with its 24-inch limestone walls. We learned of Woodford’s own distinct formula for its whiskeys—72 percent local corn (for its sweetness), 18 percent North Dakotan rye (for its spice) and 10 percent Wisconsin malted barley (to break down the grains’ sugars) and how these are combined with Woodford’s proprietary yeast (to start the fermentation process) and local, mineral-rich, iron-free, limestone spring water. 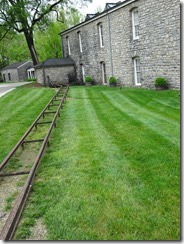 Once inside the building, we looked into the giant cypress fermentation vats and saw and smelled how fermentation began at a furious pace during the first day, and gradually slowed down until the mix reaches nine percent (18 proof) alcohol and extracts the most flavor over the course of six to seven days (in contrast with three days at many other distilleries). 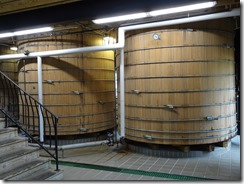 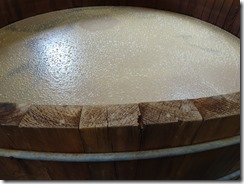 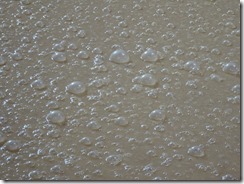 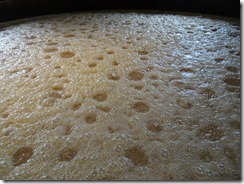 When the mash cools down, the solids are removed (and sold to farmers for livestock feed) and the liquid is pumped to the first of Woodford’s three stills (in contrast to two stills used by most distilleries. This first still, called the beer still, removes impurities and, by boiling and cooling/condensing the alcohol distillate, brings the resulting liquid to 40 proof (20 percent alcohol). The second still further distills it to 110 proof and the third to 158 proof—just below the legal limit of 160. 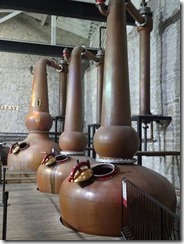 The resultant “New Make”, or White Dog”, is barreled and placed on a gravity-fed track in which the barrels find their own way to the limestone aging warehouse. 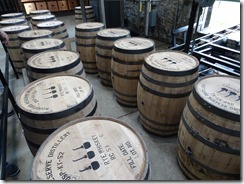 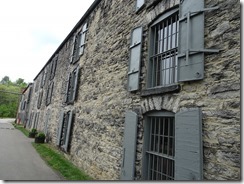 In the warehouse, distilled water is added to New Make to bring it back down to 110 proof, a bung is inserted into the barrel and it is left (albeit with continual monitoring and tasting) to age. The barrels, all of which are made in the company’s own cooperage, are toasted and then charred to a heavy “alligator char” to open the pores of the oak and to improve the color and taste of the whiskey. The whiskey remains in these barrels for a minimum of two years, and up to eight years or for as much longer as the tasting panel determines is appropriate. 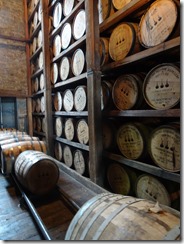 The longer the whiskey remains in the barrel, the more of it that is lost to evaporation (30 percent or more over an eight year period) and the higher its alcohol level climbs (generally to about 140 proof). It is this aging that gives bourbon all of its color and roughly between 50 percent and 70 percent of the taste (with the rest of the taste coming from the grain and the fermentation process).

Once the bourbon goes through its normal aging process most of it is filtered several times through charcoal, topped off with distilled water to 90.4 proof and bottled as Woodford Reserve Distiller’s Select Straight Bourbon. Some of this aged bourbon, however, is selected for special treatment—an extra three or more years of aging in much more heavily toasted barrels. It is then bottled as Woodford Reserve Double-Oaked. (The company, meanwhile, has also begun making a more heavily-spiced Rye Whiskey, made with 53 percent rye.)

We then went from the warehouse to the tasting room, where tastes of Distiller’s Select and Double-Oaked awaited. After going through the process of sniffing, taking an introductory taste, and then another taste of each, we developed a strong preference for the smoother, more viscous, more caramel-like Double Oaked. Then, after a taste of Ruth Hunt Bourbon Ball candy (yummy), we took final tastes of each, with the sweetness and chocolate of the candy infusing the taste of the bourbon and enhancing the entire experience.

Our Woodford Reserve experience led us (okay, it led Tom as Joyce hasn’t seem to have developed an appreciation of bourbon) on a mini-bourbon-exploration frenzy. We toured and did tastings at two other Distilleries: Buffalo Trace (which is discussed in our Historic Frankfort, Kentucky post) and Evan Williams (see our Downtown Louisville post). These were followed by additional, less formal tastings at a number of bars and restaurants—not to speak of all of those Kentucky Derby Mint Juleps!