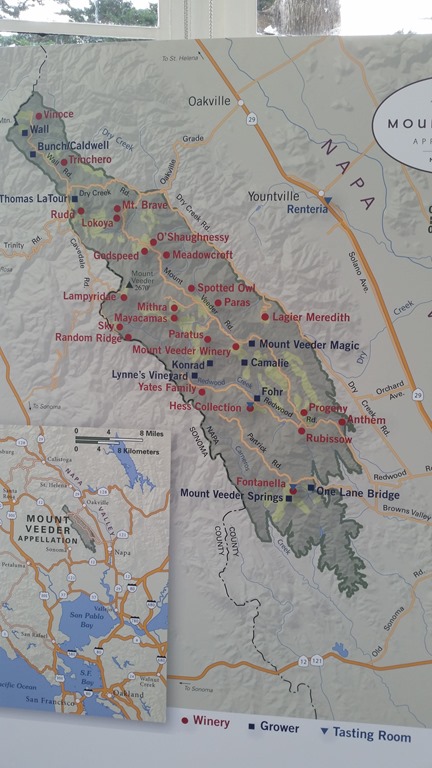 We were fortunate enough to attend the event as well as a media seminar built around the very timely theme “From Water to Wine”, with three of the appellation’s premier winemakers (one of whom also happened to be a professor of Viticulture and Enology at UC Davis).

The panelists began by explaining the unique geology and climate of the huge (16,000 square acre), low yielding (2 to 2.5 ton per acre—about half that of the total Napa Valley) Mount Veeder appellation and how conditions vary dramatically not only within the appellation, but within tiny, individual blocks.

What accounts for these low yields and variations? A combination of three primary factors:

The mountain’s difficult conditions and low yields, combined with its tortuously narrow and winding roads has scared away many prospective growers and wineries. It currently supports only a relatively small number of generally small, family-owned wineries (about 35) and growers (about 7) who grow on only a tiny portion of the available land (only 1,000 or the appellation’s 16,000 total acres) and produce a mere 1.3 percent of Napa Valley’s total grapes.

This is changing. The popularity, high regard and premium prices of its wines is drawing more and more growers—including a number of large multinational corporations. It is also likely to change the mix of land devoted to each type of grape.

The mountain is currently dominated (513 acres, or 64 percent of all acres under vine!) by Cabernet, followed by Chardonnay (76 acres, which is largely a legacy of old Domaine Chandon plantings) and increasingly Malbec (72 acres), and more distantly by Merlot, Syrah and Cabernet Franc. The vast majority of the 20 or so other grape varieties each account for only an acre or two apiece. This too is likely to change as more acres come under cultivation and as old Chardonnay vines are increasingly replaced by by Malbec, Merlot, Syrah and especially, by Cabernet.

Although we enjoyed a number of the wines that we tasted, we continue to by particularly impressed by the appellation’s Cabernets. It was so hard to to pick our favorites, but we tried. Among them were those from Fontanella Family (2013), Mount Veeder Winery (2012 Reserve), O’Shaughnessy Estate Winery (2012), Paratus (2011 and 2012 Reserve) and Sbragia Family (2010 Wall Vineyard). And then there were two to-die-for Cabernets: The Mithra 2012 and the Hess Collection 2001 (the latter of which was only available at the seminar).

We finished the day with a lovely dessert wine (the only one of the tasting), a 2007 Sky Vineyards’ Late Harvest Zinfandel. A great way to end a day of tasting excellent wines.