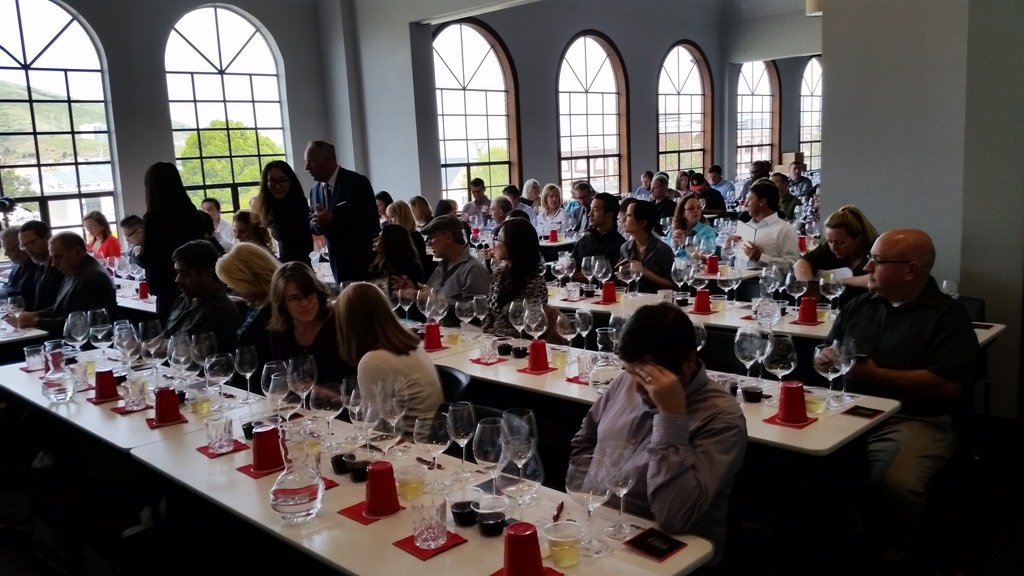 Are you skeptical of all the value of using different shapes of glasses for each type of wine? Although we generally bought into the logic and generally do use glasses that are designed for the particular varietal of wine, we had not undergone the type of religious experience necessary to make us true believers.

Maximillion Riedel, the 11th Generation CEO and owner of Riedel Crystal, sought to change all that at an industry seminar and comparative tasting at the San Francisco Wine School. Riedel began with a high level overview of the company’s philosophy, its view of why different glass affect the perception, taste and enjoyment of wines and how the company works with tasting panels to optimize each glass for particular varietal.

Each participant had a place setting of:

The Pinot tasting provided another revelation: not that the wine smelled and tasted better from a glass designed specifically for Pinot Noir than from one designed specifically for pinot than from those designed for syrahs and for cabernet—that was to be expected. (While the Pinot glass highlighted the wine’s bright red fruit and produced a long aftertaste, the Bordeaux glass produced little aroma and more acid and tannin in the taste. The syrah glass meanwhile, fared much worse. The real surprise came from learning that the Riedel Pinot glasses with which we are familiar and use were designed for French, Burgundian Pinots. After American pinot producers complained that these glasses did not do justice to their wines, Riedel worked with them on a new glass. The result was a somewhat different shaped bowl and, more significantly, a more tapered top with an accentuated lip that pushes the initial taste to the tip of the tongue (to accentuate the fruit), enhances the acidity (to better balance the fruit) and neutralizes the tannins. Now, New Zealand producers are working with Riedel to design yet another glass that is optimized for their pinots.

Then on to the Cabernet (which, by the way, consists of 12 percent Merlot). But before tasting, we saw a number of the company’s newer decanters and learned how it is moving away from traditional molded decanters to more freeform gravity-shaped designs that, have much larger footprints than traditional models and unusual snake-like shapes with multiple chambers that improve aeration. After explaining how cabernets of virtually all blends and ages benefit from decanting, the best way to pour wine into decanters (slowly), how long to decant (ideally about two hours) and the best way to clean decanters (rinsing twice with warm water, letting sit overnight with water and using a hair dryer, if needed) we were then ready to taste the cab that came from them.

Again, the emphasis was on the differences in the texture, the nose and the taste of the wine in different glasses than on the particular wine. The cab glass emphasized the dark fruit and spices (with hints of tobacco and leather) and produced a nice balance. The pinot glass, meanwhile, highlighted the spice, but effectively masked the fruit. The syrah glass proved to be an even worse match for the wine, with an oaky, spicy nose, a minerally and woody taste, a bitter aftertaste and virtually no hint of fruit.

The wine and chocolate pairings went as would be expected. After learning the best way to perform this tasting (put a small bit of chocolate in your mouth and let it melt before tasting the wine), we tried the white chocolate with the pinot and the dark with the cab. While the white chocolate and pinot came through as distinct tastes from the cab and syrah glasses, the pinot glass produced a wonderful blending of the wine’s cherry tastes and the vanilla of the chocolate. The dark chocolate/cab combo yielded similar results with the cab glass yielding a seamless combination of the chocolate with the fruit and spice of the wine.

By the end of the tasting we had certainly gained a much better appreciation for the rational for designing different glasses for different wines and especially for the resultant differences in texture, nose, taste and aftertaste.

But in some ways, we left even more confused than when we came in. The huge and ever-expanding range of shapes, and the role of different glasses for oaked versus unoaked chardonnays and pinots from each continent—what comes next: different glasses for each appellation and each specific blend?

Then there are the multiple lines of glasses that Riedel offers for each varietal and for different venues, such as for homes and for restaurants. Some are hand-blown, others made by machine. Then there are different shapes of glasses for champagne, a series of glasses made specifically for swirling wine and the stemless “O” series. And this does not even begin to account for glasses that are tailor-made for whiskey, for martinis, for manhattans, for tequila, for cognac, for brandy and others. Nor can one forget Riedel’s water glasses. Or the company’s rapidly growing line of increasingly elaborate decanters. Oh yes, and there is also a glass for soda.

But even if you do manage to navigate all the different lines of glasses and how they are to be used, how the shapes for each varietal differ by product line and when each should be used, you still have a number of logistical issues that must be confronted. First, how can you afford to stock a full line of oenologically-correct glasses? And even if you can afford them, where are you going to store them all?

In sum, the seminar, while certainly very enlightening, was also very intimidating. The best part, however, is that we left with a number of additional Riedel glasses (most of which were different than those we already had at home). When we got home, we took our our everyday Reidel O glasses and tasted some of our normal drinking wines in the O glass and in the new glasses that we just received. Big difference and much better in the proper glass. Now we just have to figure out where to store them, remember what type of wine each is used for, and explain why each guest has a different shape of glass for the same wine. And one more thing….how to wash them as we can only put a small number of stemmed glassware inour dishwasher for each washing. Who ever knew that enjoying wine was so challenging!