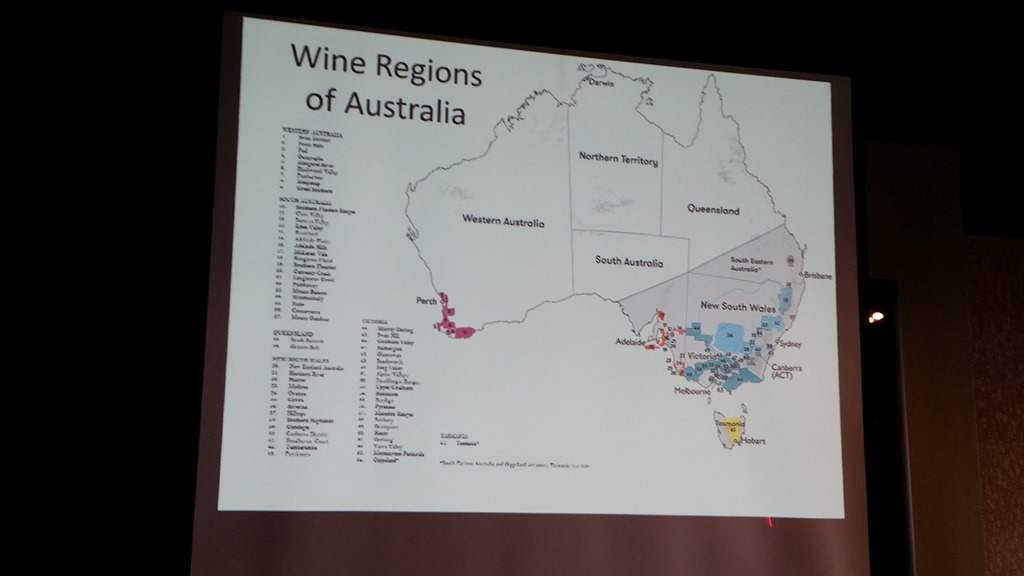 We love tasting Australian wines anytime, for any reason. This being said, we were particularly happy to receive an invitation to a San Francisco tasting of the wines of South Australia (the state in Central South Australia of which Adelaide is the capital). The reason? We are planning a two month trip to Australia later this year (2016) and plan to visit a number of the country’s wine regions. This tasting, combined with a seminar on South Australian wines drilled down into wineries, varietals and wines from two of the state’s premier grape-growing regions—Barossa Valley and McLaren Vale—and provided an excellent means of selecting some of the wineries we plan to visit and buy when we are there.

South Australia is a large state that includes 19 different growing areas that, combined, produce almost half of all Australian wine and 80 percent of the country’s premium wines, including 79 of the 139 wines listed in the prestigious Langston collectability classification.

Each of these regions has its own unique locations, altitudes and microclimates. Mount Benson and Robe are nestled right along the coast, whose breezes cool and deliver moisture to the vines. Others, Riverland and Coonawarra are nestled deep in hot, dry inland valleys. Some, such as Barossa, consist of two or more very different areas—such as the warm, low elevation Barossa Valley and the cooler, higher elevation Eden Valley.

And then there’s the history. Vineyards were planted in some of these South Australia growing areas (particularly Barossa, McLaren Vale and Adelaide Hills) as early as 1836—two years after the Australian Colony was formally founded. And since Australia never felt victim to phylloxera , some Barossa vineyards continue to produce wine from vines that are 174 years old (planted in 1842).

And they are attempting to retain this history and preeminence by leading the nation’s drive toward sustainability, (including through extensive use of organic and biodynamic practices) and by evolving back toward traditional practices that are intended to yield a fuller, more natural expression of the grapes. This includes picking grapes at lower ripeness (to reduce alcohol levels), shifting from extensive use of new barrels toward large barriques and more neutral oak (to emphasize the fruit) and by retaining more stems in the initial fermentation stage (providing more natural tannins and more savory flavors).

This, however, is not to suggest stasis or resistance to change. South Australia has also created some of the world’s most innovative oenological technologies (such as the Bev-Scan spectral analysis system that can analyze wines through their bottles) and practices (such as the adoption of screw caps for long-aging red wines).

Down to Business: A Comparative Tasting of Barossa and McLaren Vale Wines

After an overview of South Australia’s growing regions and the wines, it was time to get down to the business of tasting. We began with a guided tasting that compared the expressions of different varietals grown and produced in each of these two premier regions. Beginning with whites (Riesling and Chenin Blanc) and lighter reds (especially GSM—Grenache, Syrah, Mouvedre–individual varietals and blends) we progressed to bigger Shiraz and Cab-based wines and blends, including vineyard designates and reserve wines from some the country’s premier producers. We were, for example, all but blown away by wines including:

We then adjourned to an open tasting, where we had a chance to explore a range of additional whites and reds from these and other producers. Who were these producers and which wines did we taste and most enjoy? These questions, I am very sorry to say, will not be answered. It seems that somewhere between the tasting and home, we managed to lose the list of wineries, the wines they were tasting and our notes on these wines.

Sounds like we will have to atone for this carelessness by making even more stops than planned on our forthcoming visit to Barossa, McLaren Vale and other Australian vine regions at the end of 2016/early 2017. Then we will write a full report.