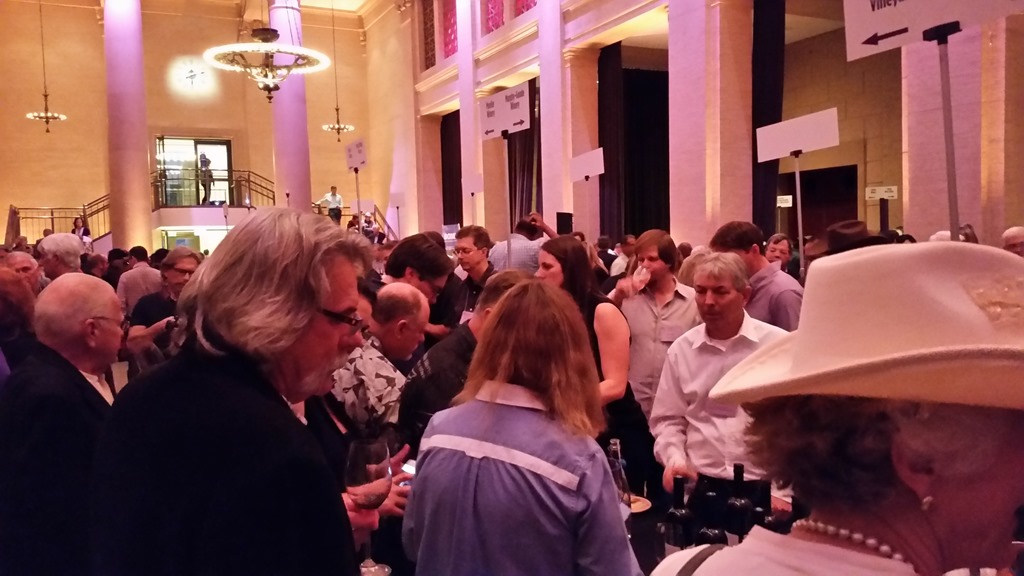 We recently attended some of the events from ZAP’s (Zinfandel Advocates and Producers) 2016 annual Zinfandel Experience celebration in San Francisco. We’ve attended multiple ZAP events throughout the years, most recently, ZAP’s 2013 festival, ZAP’s 2012’s  Grill-O-Rama, and 2012’s ZAP Festival. These events are always a treat….allowing us to taste current (and past) releases, and enjoying food that pairs well with zins.

This year’s 3-day, ZAP’s Zinfandel Experience was not an ordinary party, but one that specifically celebrated the 25th Anniversary of the founding of ZAP (see our November 29, 2015 post).

Our enthusiasm remains intact after having just attended two of the festival’s many events. These events were:

This celebratory tasting featuring 60 winemakers who poured rare bottles, vineyard designates and cult wines in addition to their current offerings. A couple wineries even dusted off bottles from the last century. Ravenswood, for example, opened Magnums of its 1997 Dickerson Vineyard Zin while Turley went all the way back to 1994 (followed by a 2004 and its recently released 2013) Hayne Vineyard Zins. Carol Shelton, meanwhile, offered a vertical of its 2001, 2002 and 2003 Rocky Reserve Rockpile Zins to offer hints as to how its new 2013 Rocky Reserve may age. And even though Ridge’s 2008 Lytton Springs Zin was almost green by comparison, it too was very, very drinkable.

These blasts from the past only served to whet our palettes for the dozens of current and future (in the form of barrel tastings) current wines. Among our many current favorites were

Although dessert-friendly Late Harvest Zins were in lamentably short supply, Carol Shelton did herself proud with her 2014 Black Magic Late Harvest Zin. We were in Zin heaven.

As wonderful as the wines were, tasters do not live by wine alone. And while the food selection was “limited” to charcuterie, cheese and lamb riblets, the charcuterie and cheese selections were large, varied and very good. And then there were Ruth’s Chris Steakhouse’s juicy, rare and delicious riblets that were almost the size of full chops. And, since a number of party guests were sticking around for the same evening’s Heritage Supper Club special anniversary dinner, there was far more food than the rest of us could ever hope to eat. And speaking of preparation for dinner, Patsy Cline aficionados got a brief preview of Margaret Belton’s (of ‘Always… Patsy Cline’) dinner concert.

Even better, the sold-out venue was held in the Bentley Reserve in downtown San Francisco, which is a nice venue that was just the right size

After a self-imposed two-day Zin break, we were ready to pursue our quest for the perfect Zins at Saturday morning’s Member Grand Tasting. This tasting was held in the much larger building at Pier 27. The first 2 hours (which required a special ticket) was a special member’s tasting focused on Past and Present Zins, where wineries offered selections of library and limited-release reserve wines and barrel samples, along with their current bottlings. Then, as the older vintages ran out,  the tasting morphed into a general tasting where a new group of people joined the folks already inside and sampling the older releases.

With more than 130 wineries pouring, one had more than enough wines to sample. Given our valiant performance at Thursday’s tasting, we limited ourselves to a relative handful (“only” about 30) of those wineries that we had not yet explored.

And yes, we also found favorites at this event. Among them were:

The wines were accompanied by tastes of dishes prepared by area chefs. We had three favorite dishes from two restaurants:

As we expected, it turned out to be quite a weekend. And since we certainly can’t wait an entire year for our next big Zin bash, we have already begun to map out trips to Dry Creek, the Sierra foothills and other favorite Zin regions.