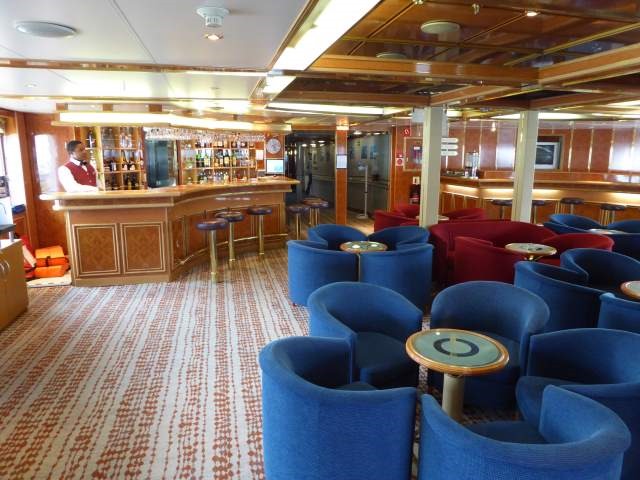 At last, we were on our way to Antarctica. We were both very excited and were looking forward to our adventure ever since we booked it a year in advance. Since we live in San Francisco, we no longer owned really warm clothing. So we had spent time over the past several months finding appropriate hats, gloves and warm clothing that could be layered. The boat provided us with warm jackets (which we would keep) and warm sturdy boots (which were only a loan to us).

We booked our tour with Expedition Trips, one of the 2 highly recommended agencies that specialized in Antarctica tours. From the very beginning, all the way up until we returned home, the 2 people we interacted with were very approachable and willing to answer any questions, no matter how small. After listening to our wants and needs, they booked us on Polar Latitudes’ Sea Explorer I (note: the ship will be undergoing renovations and will have a new name in the next season). This 110-person ship is fairly luxurious as small ships go. Our “suite” had a king size bed and a separate “living room” area that contained a couch. The room had a TV which would only play DVDs (which were plentiful in the library). The library also had a lot of books and the ship had plenty of sitting areas. Lectures were held in the “lecture hall”, which also was the place were evening appetizers and daily summaries were held. Wine accompanied dinner as part of the price and each meal offered a selection of choices. Food was amazingly good for feeding so many people and the variety was amazing. And, as a bonus, two of the company’s owners were on board and were more than willing to engage in conversations and answer questions. 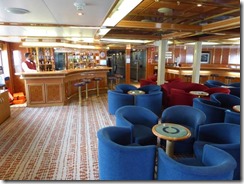 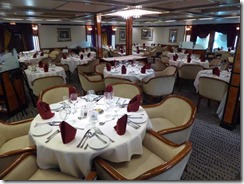 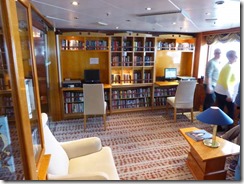 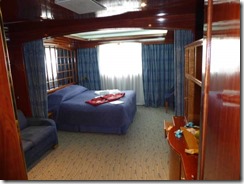 And then there was the staff. The expedition team consisted of a large group of experts in various fields. For 10 days, they were energetic, enthusiastic and just wanted to share their knowledge with us. Considering that they were working most of their waking hours, it was amazing that they were continually first-rate.

As mentioned in a previous blog, our trip to Antarctica started in Ushuaia, Argentina, where we spent the night. They don’t call it the End of the World for nothing as it is on the southern tip of South America and is the main starting point for Antarctica cruises. On the day of our departure, we woke to rain. By the time we left our Ushuaia hotel, it had turned to hail. Then sunshine; then, when we boarded the boat, snow. And by the time we left the dock, it was overcast.

So are the vagaries of Tierra del Fuego weather. And it was to get even more tentative after we exited the protected Beagle Channel and embarked on our 600 nautical mile journey through Drake Passage, (the roughest stretch of water in the world) to the South Shetland Islands. Then to the Antarctica Peninsula.

After our final peeks of the southern tip of Tiera del Fuego, for the next 2 days, we saw little of anything other than our ship, our fellow passengers, the three-to-six-meter swells that continually rocked our ship and a handful of seabirds (several species of albatross, prions and petrels) that often follow in ships’ drafts.

Day One. We boarded our boat about 4:00 PM and left port about 8:00 PM. First up was a life vest drill. Sure hope it never happens…especially since the life vests covered most of our faces too. 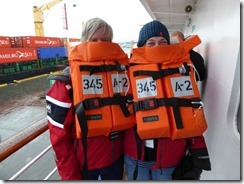 The seas began getting rough about 3:00 AM, when we left the Beagle Channel and entered the Drake. Although we have not have previous problems with sea sickness, after seeing many of our fellow passengers (or, should we say, not seeing many of our fellow passengers for the next 24-36 hours as many of them were confined to bed from seasickness), we were glad we began taking Dramamine as a preventative measure. The ship’s doctor seemed to be called to a cabin every 10 minutes and he kept his medicine bag with him at all times.

Day Two. A full day in the Drake Passage and a full day of educational programs, with some people remaining in bed all day and many others who may have been better off in bed. While we were tired from poor sleep due to the bed rocking all night long, neither of us felt ill-effects of the still moderately rough sea, with three-to-four meter swells. We were continually followed and accompanied by about ten species of birds, including the large and impressive wing-spanned Giant Petrals (about five feet) and the longest wing-span bird of all, the Wandering Albatross (about 11 feet). 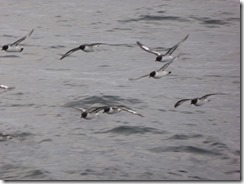 Day Three. As the seas became smoother, people were feeling much better and starting to come out of their cabins. Another full day under sail and another filled with lectures. Then finally, there were the icebergs, starting around 5:30 PM. Then the South Shetland Islands about 8:30 PM and our first whales (Humpback and Fin—which is the second largest of all whales, after Blue) about 9:00 PM. We were getting very excited! And, amazingly, Joyce’s Galaxy 5’s GPS application was plotting our route too. 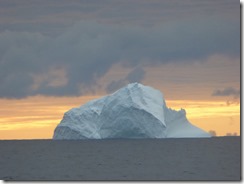 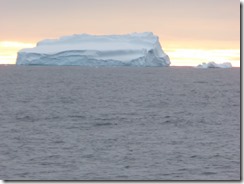 Day Four. We woke up in the South Shetland Islands, next to a giant flat, tabular iceberg on one side and the snow-clad Half Moon Island (our morning destination) on the other. 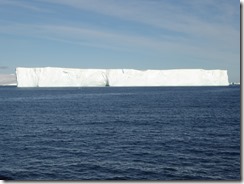 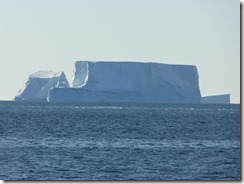 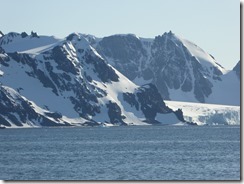 After breakfast, the ship entered the island’s deep cove. We spent three hours, first with a short walk up to a large chinstrap and gentoo penguin rookery with parents tending and feeding their chicks and carrying pebbles in their beaks up to the nests. In the middle of the rookery was also one solitary macaroni penguin—very unusual since they are virtually never seen this far to the south. We then went on a slightly longer uphill hike, past blue icebergs, two pair of sunning seals (Weddell and Crabeater), the bones from a long dead seal and a Spanish Research Center. Although the goal was to hike over the hill to the opposite side of the island, a Skua (bird) had other ideas. Aggressively protecting her nest, she dive-bombed us into submission, forcing us to climb another hill where we had a very different view of the same side of the island. 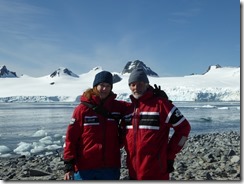 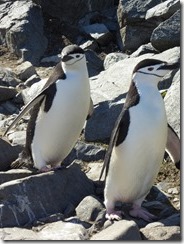 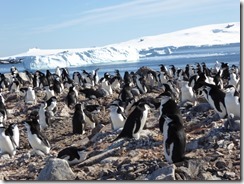 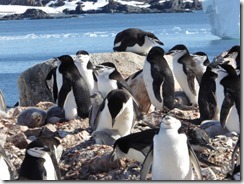 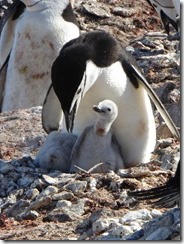 Our afternoon stop was on Deception Island, where we entered the harbor (the caldera of a still active volcano) to the site of a bleak and rather depressing shear rock island covered by volcanic ash and cinder. The island was the base of a late 19th-century sealing station that was abandoned after more than a half million seals had been killed and there were few left to be had. In 1912, it was resurrected as a whaling station and later as a processing plant until many seasons, with each ship killing thousands of whales per month, the population was decimated. It was then converted into a British metrological station until it was evacuated following a series of volcanic eruptions in the late 1960s to 1970. Although Tom was tempted by the trip’s Polar Plunge into the icy waters, he  semi-reluctantly passed in favor of joining Joyce on a walking history tour, where we saw the crumbling remnants of the whaling station, including dormitories in which up to 300 men (mostly Norwegian) lived, fuel and whale oil tanks, boilers for rendering the blubber, whale bones and even an airport hangar used by the British. We learned of the raw efficiency of the hunting and processing processes and how that process evolved from extracting the blubber and meat and then leaving the carcasses to rot in the harbor, to one in which the carcasses were also processed into fertilizer. Also of the island’s role in the competition for Antarctic Territory, especially between the British and the Argentinians. The island is being left as is, with no intervention, in order to “preserve” history. Interesting history, but little of the raw beauty we saw from the ship and on Half Moon Island. 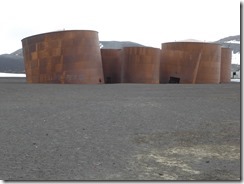 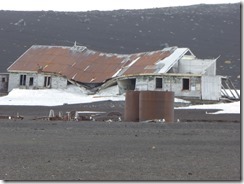 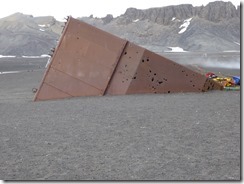 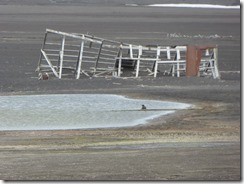 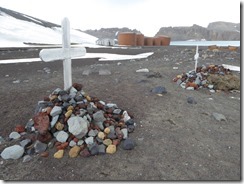 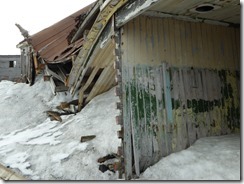 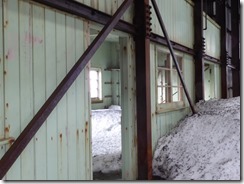 Then back to the boat to go onto our next day’s journey (and our next blog)  and to actually step foot on Antarctica.