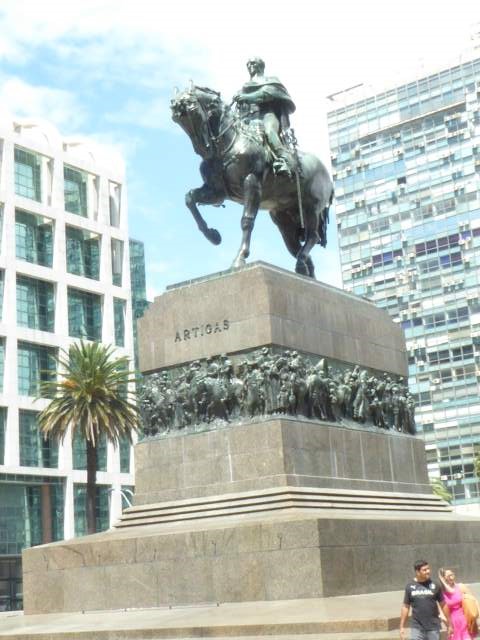 This was our first trip to Uruguay and we started it in Montevideo. After 17 hours of travel (and 3 plane changes), and a needed night’s sleep, we oriented ourselves by taking a guided walking tour of the Old Town from FreeTour.com. The Spanish founded Montevideo in 1724 as a naval base. We started our tour in Independence Square, which is the dividing line between the old and the new towns and is graced by the largest of the many statues in the city commemorating Jose Artigas, who led the 1811 revolution that eventually gained the country’s independence from Spain in 1825. Around the square are two historic buildings, including the former presidential building and a former government building (once the tallest in Latin America) that is now a commercial office building. We then went into Old Town and the Sarendi Street pedestrian mall, which is flanked with stores and in the middle, craft and flea market stalls. After a brief detour to the city’s theater building, we were back on Sarendi and in Constitution Square (the primary Square in the original Old Town), a pretty tree-filled square lined by the Cathedral on one side and the original Cabildo (City Hall) on another. 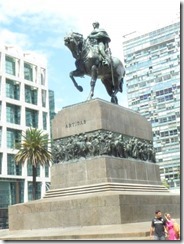 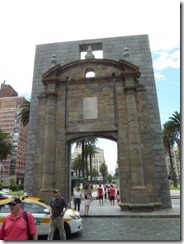 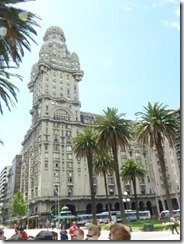 Our guide was inexplicably vague and confused by the history of the city and its various periods when it was ruled by Argentina and briefly, by the British. She did, however, have a better understanding of the composition of the city, from its original Spanish settlers, through its agreement with the Canary Islands (another Spanish colony) with which Uruguay entered into a contract under which the Islands would send ten families to the region in return for a specified number of tons of grain. Then came Southern Italians, followed by smaller numbers of Swiss and Germans (who settled primarily in the Western part the country near Colonia). And what of the natives? There are virtually none. The Spanish killed off most of the Indians when they arrived. And if they survived the Spanish, they were then hunted down and slaughtered by the troops of the country’s first president in the late 19th century.

Our guide was much more interested in recent history, especially the 2002 financial crisis during which 40 percent of the country’s families lost their jobs and fell below the poverty line and by the time the recession ended, one million, of the country’s roughly four million people emigrated to other countries. While the country has certainly recovered—seven percent unemployment and 10 percent of people are below the poverty line—Uruguay is still a third-world country whose economy is almost totally dependent on agriculture (especially leather) and tourism and which is saddled with much foreign debt.

After a brief stop at the Promenade, which stretches for 20 kilometers along the city’s coastline, we ended at the Public Market which now almost entirely of perpetually packed (at least during the day, when the tourist ships are in town) with “Assado” restaurants—grills that serve virtually every imaginable edible piece of a steer. Each serving seems large enough to feed multiple people. You will not go hungry. 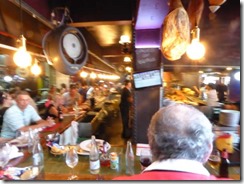 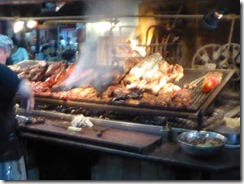 Since we were craving some exercise after almost a full day in planes and airports, we were anxious to explore other parts of the city on foot after our tour. So, we crossed the city (3 miles) on foot to the beach and then circled back through the city’s’ downtown area and along via Avenida 18 de Julio, its main commercial street. 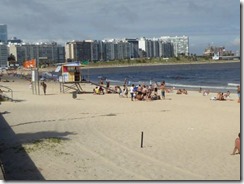 Old Town, and to a lesser extent the rest of the downtown area, is a mix of ornate colonial-style buildings, unadorned concrete structures and modern high-rises. The eastern end, near the beach, is home to many upscale residential buildings while the city’s commercial center is more functional than it is aesthetic. Although the city and those parts of the countryside that we experienced on our drive to and through the Canalones wine region and our bus ride to Colonia appeared much more upscale than the “third-world” appellation assigned by a couple of the people we met, we were totally impressed by the friendly people, including but not limited to the man who, saw us sitting by the side of the road in confusion, stopped to offer assistance, made a couple phone calls for us and gave us directions. It is experiences such as these, more than the cities or even the wines, that will provide our fondest memories of Uruguay. 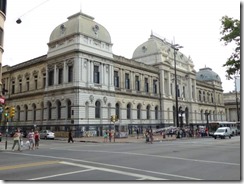 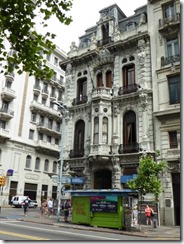 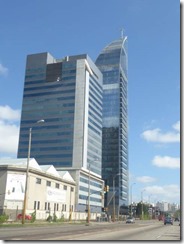 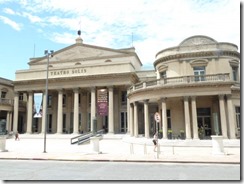 We had a chance to visit only two of the city’s restaurants; both part of the Public Market and both for dinner. Unfortunately, our choices were limited as many of the restaurants closed once the large tourist boats left in the late afternoon. But we found that most of the restaurants had similar menus.

El Peregrina, where Tom had a huge sirloin steak and Joyce had chicken breast. Both, which were served with a choice of sauces, came smothered in delicate, creamy Roquefort cheese sauce. Our dishes were accompanied by two very young, Uruguayan red wines: 2014 Castillo Viejo Catamayor Merlot from the San Jose region and 2016 Stagnari Tannat from the Salto region. While the chicken was a bit overdone, the steak was served “jugoso” (rare), exactly as ordered. While both of the wines were drinkable, both would have benefited from more aging and especially, from storage in a temperature-controlled environment.

La Charcra del Puerto, another Assado restaurant, where Tom had a perfect (also cooked jugoso or medium rare) veal steak with salad and Joyce had a huge seafood casserole, overflowing with shrimp, squid, mussels, octopus, cockles and prawns (and a potato for good measure) in a nice saffron sauce. The casserole could have fed 3 people!. We also enjoyed the wine (2013 Los Corros de San Juan Cuna de Piedra merlot.

We stayed at the Don Boutique Hotel. The first night we stayed in a twin room. The room was very small, although comfortable. Fortunately, we had reservations in a king deluxe suite for the remaining nights. The bedroom was much larger and was also comfortable. We didn’t need the second sitting room that came with the suite, but it would be nice to have if you needed some private time. The sink area was in a separate room from the bathroom, which makes it easier to use the sink when someone else is using the bathroom. The shower was in a 2 person Jacuzzi tub. The water pressure came and went from the shower one day and was fine the other day. The bathroom also had windows that opened to let out the steam. Bathrobes were provided. The staff was very friendly and helpful…but we found that everyone in Uruguay seemed that way. The only negatives were that the bed squeaked when someone moved in it and, more irritating to us, was that there was an opaque vertical glass strip by the door. When someone walked in the hallway at night (the room is right across from the elevator), the light sensor turned the hallway light brighter. If you slept with your face towards the door, it was a little startling.