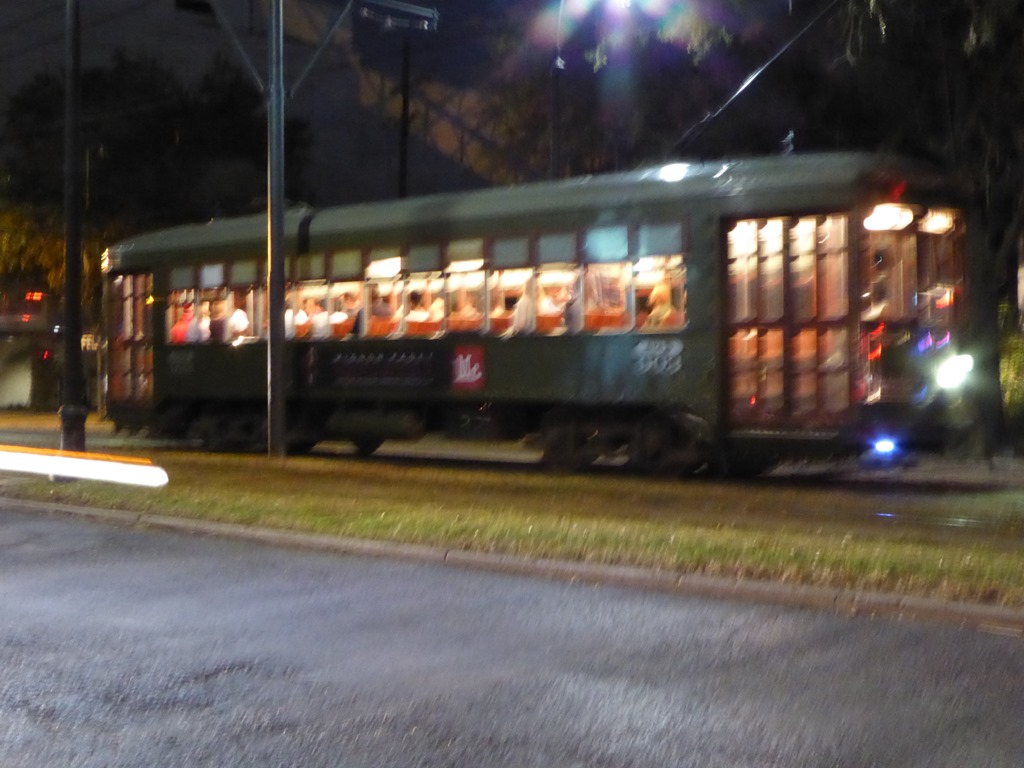 On this trip to New Orleans, we stayed on Saint Charles Avenue in the heart of the Garden District, making it the first time we really took the opportunity to explore this lovely neighborhood. We spent most of our time on the Avenues that lead through the Warehouse District and downtown to the French Quarter. Each of these avenues has a very different character. St. Charles, for example, is a wide avenue with its famous streetcar running down the middle and old-money mansions still lining some of the blocks. At the other side of the district is Magazine Street, the neighborhood’s main commercial street that is lined with small local businesses and restaurants. 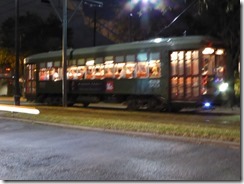 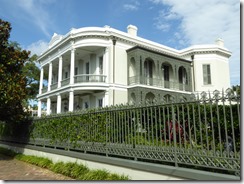 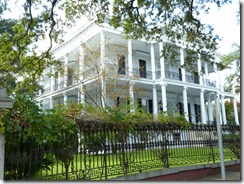 Between these two main thoroughfares lie as series of smaller, more quiet residential avenues and cross-streets that are home to a many large, well-maintained, upper and upper-middle class homes.

Although we have strolled through this neighborhood independently on this and previous trips, we wanted to get a better feeling for this pretty area. So we took another walking tour.

Free Tours by Foot Garden District and Lafayette Cemetery. After the 1803 Louisiana Purchase, large numbers of boorish, ostentatious Protestant Americans began invading the formal, Catholic Creole culture of New Orleans. Shunned by the French Quarter’s establishment, they created their own neighborhood where they could buy large lots of land and build mansions that were much larger and more lavish than those in the tightly constrained French Quarter.

Intent on out-showing their neighbors, people bought ever-larger lots and hired celebrity architects to build ever-larger, ever-more lavish homes. Although there are many Greek Revival-style homes, architectural styles are all over the ballpark, including a couple of Gothic Revival homes. Often, however, these nouveau-rich families were not content with a single style. They wanted their architects to incorporate a doorway from one building, a turret from another and a porch from yet another. This sometimes let to eclectic mish-mashes with no discernable architectural style. But whatever, the style, many of the homes were huge, often 8,000 to 12,000 square feet. 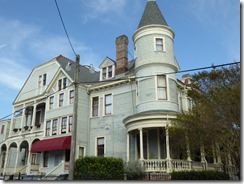 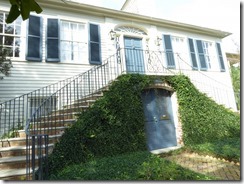 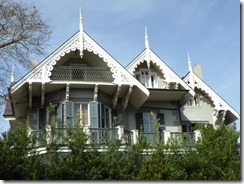 A number of these homes are, or were owned by celebrities. One of the largest, for example, belonged to Anne Rice, before it was sold to Nicholas Cage and taken over and sold by the government for back taxes. Other such homes within the relatively few blocks covered by the tour, are currently owned by actors John Goodman and Sandra Bullock (the later of whom has apparently adopted a local public school for which she holds annual fund-raising events and counsels students).

And speaking of Anne Rice, a large building in the area that was originally built as a coed-roller skating rink for the 1884 World’s Fair, has been recycled into bookstore in which she now does the first signing of her books at this location. 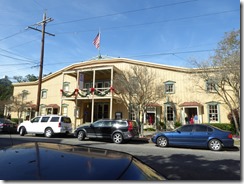 While the district began to take shape in the early 1800’s, the oldest current home (at least what is left of it after some major style changes) was initially built in the 1840s and now the home of the French Council General. 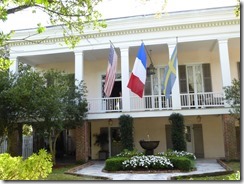 The Garden District, however, was not always the fashionable haven that it was when it was built, or that it is today. It has faced some tough times over its almost 167 year history—especially during and in the aftermath of depressions. After all, the upkeep on such huge wooden homes can be extraordinarily expensive—the humidity, the heat and the vast amounts of rainfall all take their tolls on large wooden structures. And this does not even include the huge swarms of voracious Formosan termites that infest the area. As a result, many of the large homes were converted into rooming houses or were torn down and the lots subdivided to make way for smaller, more affordable homes, especially from the 1930s through the 1950s. Even the now-elegant Commander’s Palace restaurant building was temporarily used as a whore house. 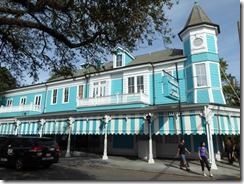 By the 1960s, however, the growth of Louisiana’s oil and gas industry began to draw thousands of wealthy families and highly-paid executives who found potential in the once lavish neighborhood. They began buying up and renovating these buildings, returning the neighborhood to its past glory days.

Although the Garden District is known primarily for its large, fashionable homes, it also has its own cemetery.

Lafayette Cemetery is a non-denominational burying ground that with the same above-ground structure as the City Cemetery Number 1 that we visited on our French Quarter Tour (see previous blog). As in the city cemetery, families buy tombs that can accommodate multiple generations by removing the casket dropping the decomposed remains into a lower chamber and then by adding a new casket.

Although most vaults can only accommodate one casket at a time, the caskets only have to remain for a year and a day, after which the heat will have totally decomposed the body. At that point, if another family member dies, the vault is reopened, the casket removed and moved down to a lower compartment than is large enough to accommodate the remains of innumerable generations, and the new casket is placed in the higher compartment. And what happens if another family member dies before the 366 days? No problem. The city owns a large number of wall vaults that can be rented for exactly this purpose. 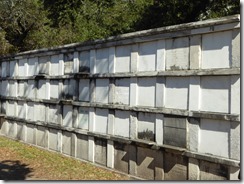 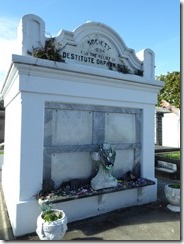 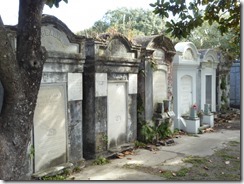 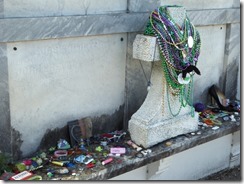 Although the cemetery consists primarily of privately-owned family tombs (in addition to the above-mentioned wall tombs), it also contains some larger “Society Tombs”. These organizations construct large, multi-person tombs for which members pay monthly fees that ensure them with a space in a communal tomb upon their deaths.  Once upon a time, a lady apparently claimed to have seen an apparition of a voodoo witch emendating from the tomb. Ever since, people have left offerings to the witch on the tomb. Among the crop of offerings during our visit were one women’s high-heeled shoe, a box of Altoid mints and a number of beaded Mardi Gras necklaces. (Apparently, the single-shoed witch had bad breath and likes to party.)