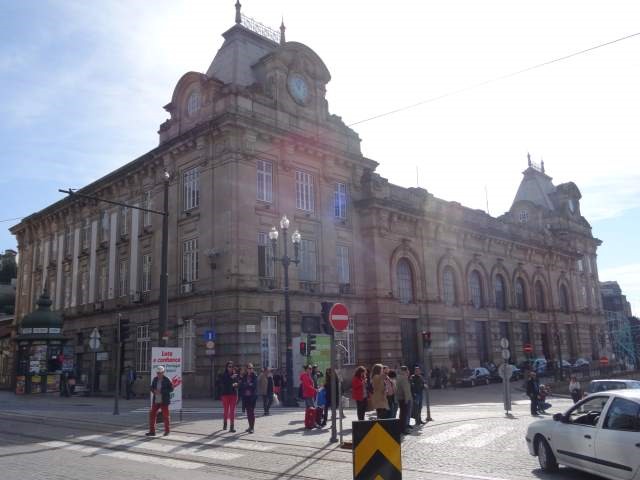 We finally made it to Porto Portugal. We love the city’s character that began coming into prominence (not to speak of prosperity) when it became one of the first on the Iberian Peninsula to be recaptured from the Moors and henceforth, began to prosper as a trading city and center for provisioning Crusaders who were leaving by ship for the Holy Land. This maritime heritage served it well as Portugal prospered from its opening and initial near-monopoly of the spice trade with Eastern Africa and India and the colonization of Africa, Brazil and Macau. Although this trade began to fade in the 17th century, the British taste for wine—and especially Port wine—created an increasingly lucrative substitute as Douro Valley wine was shipped by river to Porto and Vila Nova de Gaia (on the other side of the river) for aging and shipping to England.

Today, the Porto metropolitan area (which includes the still separate city of Vila de Gaia) is Portugal’s second largest city and one of its primary industrial, wine and tourist hubs. Even wine and tourism, however, has not fully insulated the city from the wretched state of the Portuguese economy, from which educated young people are leaving in droves and this, combined with the lowest birthrate in Europe, is contributing to the oldest, most rapidly declining and most rapidly aging population in the EEU. But even with its economic problems, and with some sections being littered with dilapidated and abandoned buildings, the city—at least for tourists—has many charms.

The central city is divided into a number of different sections. There is, for example,

Although our primary exposure to the city came through walking and experiencing the neighborhoods and admiring the city’s many, many displays of azulejo tiles (not to speak of sitting for port and wine tastings) we did take the time to explore a handful of the city’s most notable buildings and structures.

Among the more interesting are:

Although we did partake of a number of traditional Porto’s favorite dishes (especially the city’s clams Bulhao, wonderful custard tarts and Pao-de-lo Humido cakes, we managed to avoid one of the city’s “great” culinary innovations—the Franceasnhas (a huge sandwich consisting of multiple types of meat, cheese, a salad and accompanied by a huge serving of French fries, slathered with what is supposed to be an incredibly hot, spicy sauce).

This being said, we did have some wonderful meals.

Astoria. After our last few experiences, we have begun to lose our traditional resistance to hotel restaurants—at least restaurants at good hotels. And Palacio das Cardosas is a good hotel. So after a review of the menu, we accepted our concierge’s recommendation to eat here. We are glad we did. Dinner for which we had unfortunate little time, began with a very unusual and tasty amuse bouche (vaporized oyster with celery and lime) and a couple of unusual spreads for bread. Most interesting was egg yolk with truffle salt. These were followed by two main fish dishes—both wonderful: Slow-cooked seabass fillet with oyster risotto and lemongrass foam, and baked redfish with pumpkin puree, celery pickles.

We also ate at the second restaurant of star Douro Valley chef Rui Paula, where, after a large Douro Valley lunch and many, many wine and port tastings, we confined ourselves to two dishes: traditional Clams “Bulhao” (in a white wine, olive oil, lemon and garlic sauce) and a seabass (relatively plain, except when combined with the wonderful lobster-packed risotto) and another somm-recommended wine that he explained is one of the most characteristic representations of a Douro Valley red—a wonderfully delicate 2012 Mapa red that combined a number of the valley’s indigenous grapes.

O Paparico, which is three miles outside the city center, but well worth the detour. Housed in the first-floor of an old stone building, you enter to a waiting area in which you sit on a couch watching vintage silent movies. The multi-room dining area, all with their original stone walls, is atmospheric and, more importantly, where knowledgeable and attentive servers serve wonderful food. Although we had only two dishes, both were wonderful. Joyce had a perfectly cooked seabass with clams and mussels in a fennel-tinged fish sauce. Tom returned to his carnivorous ways with an also perfectly cooked (medium rare) veal loin with marrow bone sauce and accompanied by a pot of the most unusual and delicious whipped potatoes either of us ever had—layered with caramelized onions and cumin and topped with cornbread crumbs, which added a crunchy texture. For wine, we had glasses, rather than a bottle, Tom had two different reds. While Herdade Poro Carro red from Setubol had a forest floor tinge, he especially enjoyed the 2010 Quadus (from the Douro). Joyce enjoyed and stayed with a 2012 Douro white from Niepoort.

Taverna Mercador, which began with a very interesting bread with sausage baked inside. We then split clams (in an olive oil, garlic and coriander sauce) and tasty sea bream baked in salt (to retain the moisture) and flamed in vodka (a dramatic touch). For wine, we split a bottle of 2012 CARM Reserve from the Douro. Although we liked the cozy atmosphere of this tiny, rustic restaurant, and we enjoyed the food, it did not aspire to or reach the level of our other three Porto dinner restaurants.

Vinum (at Graham’s Port Lodge), where we ate prior to an afternoon trade tour and tasting of Graham’s ports), where we began with an amuse bouche of codfish salad with cornbread and then shared an appetizer (foie gras torchon with persimmon and chicory sauce, with which the somm suggested that we split a Dow’s Lagrimo White Port (which turned out to be Tom’s favorite of many white ports he tasted). This was followed by clams in green sauce (nice, but not as flavorful as some of the other white wine garlic and olive oil sauces we have had) and a very nice roasted grouper with clams “Xerem” and polenta, with which we had a glass of 2014 Ansulmo Moldes Contracto Vinho Verde Alverinho and of 2014 Intensus Biancho from Alentejo (both of which were okay, but not among our favorites).

Bar das Cardosas, where we had two appetizers, stuffed crab spread (in a creamy, tomato-based sauce) with small toasts and an octopus tempura with sweet and sour dipping sauce (which, after sending back the first, overcooked version, was also quite good). I had mine with a Fine White Port from Niepoort. Joyce had a 2014 Branco da Gaivosa white from the Douro Valley

We stayed at Palacio Das Cardosas, where we had a lovely room overlooking the square. It was a perfect location. We got into town a little too late to return the car to the rental agency. But the concierge went out of his way to help us determine where we could return the car instead (unfortunately, it was at the airport). Each time we had a question or concern, the staff was outstanding in helping us. We highly recommend the hotel.

And, of course, since we were in Porto, we had to explore ports and the Douro Valley, which is our next blog.